Just For Laughs is thrilled to announce that the legendary Carrie Fisher will be hosting a multi-comic televised Gala. 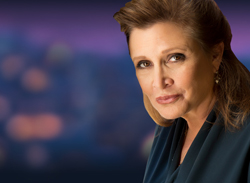 Award-winning actress and bestselling author, Carrie is a true cultural icon. She is best known for her role as Princess Leia in the original Star Wars trilogy, a role which she most recently reprised in the record breaking box office hit Star Wars: The Force Awakens in December 2015. Her autobiographical one-woman Broadway show, Wishful Drinking, was filmed for HBO and received an Emmy Award nomination, while her award-winning bestselling novel, Postcards from the Edge, was made into an Oscar-nominated film starring Shirley MacLaine and Meryl Streep. Her television credits include Laverne & Shirley and Sex and the City, and her appearance in 30 Rock was Emmy Award-nominated. She can also be seen in the critically acclaimed Amazon series Catastrophe. Her latest book The Princess Diarist, came out fall 2015.

• Brian, a writer/actor/comedian, is constantly touring stand-up in the best comedy clubs and rock venues in the country
• He release his first hour long special in 2013, The Fartist, and was a co-writer for Marvel Comics’ Deadpool
• He co-starred in Universal’s feature, The Five-Year Engagement, in the popular Canadian indie comedy, Lloyd the Conqueror, and has made guest appearances on the sitcoms, The Big Bang Theory, Seinfield, Everybody Loves Raymond, Friends, and more
• Brian released his first graphic novel, The Last Christmas, in 2006

• He has sold out his tours all over the world and was also invited to open for Dave Chappelle and Bill Burr on their national stand-up comedy tours of Australia
• Made his US TV debut on the Late Late Show with Craig Ferguson in 2015
• He has toured and recorded 4 one-hour stand-up comedy specials which have won Best Newcomer in the Melbourne International Comedy Festival , the Directors’ Choice Award in the Melbourne International Comedy Festival and Best Show in the Sydney Comedy Festival
• In 2015, Ronny was hired as a correspondent on the Daily Show with Trevor Noah on Comedy Central

• Known as  Australia’s ‘Crown Prince of Comedy’, he started performing at 19 and is now one of the most sought-after comedians in the world
• He hosted a two hour Just For Laughs Gala TV special featuring Sir Patrick Stewart, Neil Patrick Harris, Jane Lynch and Trevor Noah
• He starred in Australia’s first season of I’m A Celebrity… Get Me Out Of Here! , has co-hosted Channel Ten’s The Circle, and was featured on the Melbourne International Comedy Festival All Stars Supershow
• He is on the record books as one of the youngest nominees of Best Newcomer Award at the 2010 Melbourne International Comedy Festival 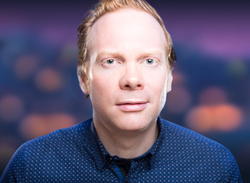 • He’s an award winning comedian who performs at major comedy festivals, like the Halifax Comedy Festival and the Boston Comedy Festival
• This is his 4th appearance at the Just For Laughs festival
• He’s appeared on AXS TV’s Gotham Comedy LIVE for, JFL’s Talk of the Fest Gala, Fox’s Red Eye and CBC’s The Debaters
• He has his own half hour special on the Comedy Network and hosts the popular podcast Positive Anger
• His first album, I Wasn’t Talking, was featured in Exclaim Magazine’s Top Ten Hilariously Good Comedy Moments of 2015