Each concert will be divided in two parts: first, Rufus Wainwright will unveil the Montreal premiere of a new work based on his opera Prima Donna with singers Antonio Figueroa, Kathryn Guthrie and Lyne Fortin, along with an orchestra conducted by Jayce Ogren, against the backdrop of a new film directed by Francesco Vezzoli. In the second part, the artist will present an orchestral interpretation of his greatest hits. 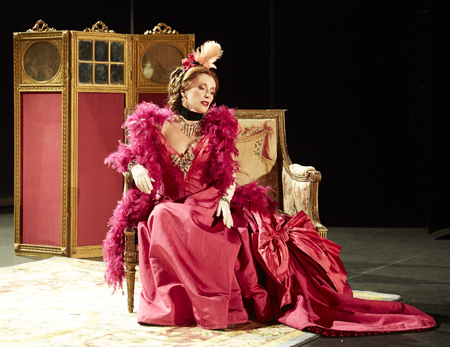 Eight years after composing the most ambitious work of his career, the beloved Montreal artist—a confirmed, passionate opera devotee since his youth—will finally enjoy the immense pleasure of presenting his first opera in Montreal. And it’s a pleasure shared by his adoring hometown audience! It’s a long-awaited rendezvous in the city where he grew up and evolved artistically, from his very first moments onstage to the international career of today. To recap, the opera had initially been commissioned by the New York Metropolitan Opera, only to be turned down because the booklet was in French, before being staged for the first time in Manchester in 2009.

Praised for its authentically expressed emotion and intelligent musical palette, Prima Donna was hailed as a magnificent celebration of romantic opera in all its splendour: “an absolute feast for the senses” with the “lavishness inherited from another era,” according to ICI Musique; “a love song to opera” in The Times UK, a “thrilling” work according to the Manchester Evening News and ”disarmingly beautiful” according to The New York Times. Additionally, the piece was recorded last year for the prestigious Deutsche Grammophon label before going on to box office success.

As an artist accustomed to doing things on a grand scale, Wainwright will bring the work to life in a symphonic visual concert, an extraordinary format at the crossroads of lyric opera, a visual experience and symphonic pop. It’s a fully-conceived spectacle that exceeds all expectations and unfolds in two parts:

Part One will run 60 minutes, presented as an encounter of lyric opera and the visual arts. An opera in two acts, Prima Donna relates the story of a diva, Régine Saint-Laurent, inspired by soprano Maria Callas and exploring the themes of doubt, old age and art. It will be presented in an abridged format by an orchestra led by American conductor Jayce Ogren, a rising classical music star, with three high-calibre soloists: internationally renowned soprano Québécois Lyne Fortin, equally renowned Québécois tenor Antonio Figueroa and dazzling American soprano Kathryn Guthrie. The performance will be twinned with a contemporary film soundtrack by Italian artist and director Francesco Vezzoli, with Cindy Sherman playing Maria Callas.

Part Two of the concert will spotlight Rufus Wainwright on piano accompanied by the orchestra, lavishly performing his greatest hits including April Fools, Little Sister, Cigarettes and Chocolate Milk and Oh What a World.