The Recovery of Antiquity, reveals how a keen interest in antiquities inspired artists from the 16th to the early 19th century. This selection of graphic works from the Museum’s collection features over fifty prints and drawings, including several new acquisitions. It features works by French masters like François Boucher, Jean-Baptiste Greuze and Anne-Louis Girodet, as well as several Italian artists. Some of these works are being exhibited for the first time.

The discoveries in Rome at the turn of the sixteenth century of the Apollo Belvedere and the Laocoön, the latter praised as a masterpiece by Pliny the Elder in the first century, occurred precisely when that city was emerging from its Medieval conditions and becoming once again the international centre of art, culture and political influence in Europe. Artists like Bramante, Raphael and Michelangelo were transforming and re-envisioning Rome at the forefront of a Christian humanism deeply rooted in its Imperial Roman artistic heritage.

A distinct aesthetic appreciation of Greek art dates back to the late fifteenth century, when the Venetian Empire encompassed the Greek peninsula and islands. Collectors, especially Venetians, prized the more generalized character of classical and Hellenistic Greek art. It reached an apogee in the mid-eighteenth century in Rome, when Johann Joachim Winckelmann, the celebrated aesthete and historian in Rome, elevated the artistic accomplishments of the Greeks above those of the Romans. In counterpoint, Piranesi’s prints recorded in dramatic and inspiring terms the legacy of Roman Antiquity. 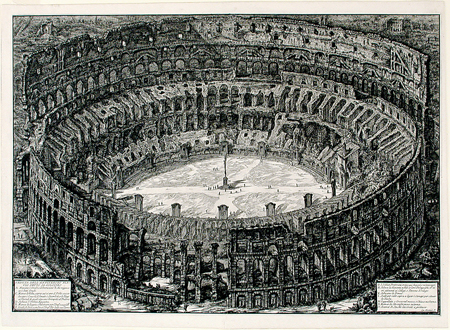 It was precisely at this same moment, in 1748, that excavations were revealing to an enthralled public the ancient cities of Pompeii and Herculaneum, buried in the cataclysm of the eruption of Mount Vesuvius in 79 A.D. Two generations later, influenced by these archaeological discoveries, Napoleon adopted Roman imperial emblemata and styles to advance his own political and imperial ambitions.

From the engravings of Marcantonio Raimondi after designs by Raphael to the spectacular eighteenth-century etchings of Giovanni Battista Piranesi exalting the still-visible remains of ancient Rome, to the early nineteenth-century illustrations after designs by Anne-Louis Girodet for works written by ancient authors, we can see the constant reinterpretation and changing visions of different generations regarding their own interface with Antiquity.

The Recovery of Antiquity is presented in connection with the Pompeii exhibit (which runs until September 5th).