Of Horses and Men — The Émile Hermès Collection, Paris

Of Horses and Men is an exhibition based on the private collection of Émile Hermès. Montrealers and visitors from around the world will get the chance to explore some of this collection, assembled by the former head of Hermès International.

The exhibition includes some 250 remarkable objects on loan from the Émile Hermès Collection, normally housed in private rooms at the company’s prestigious Parisian shop at 24 Rue du Faubourg Saint-Honoré. Startling in its historical and cultural significance, the collection recounts the story of the horse and its relationship to people. To date, only a lucky few outside the company have ever visited the collection. 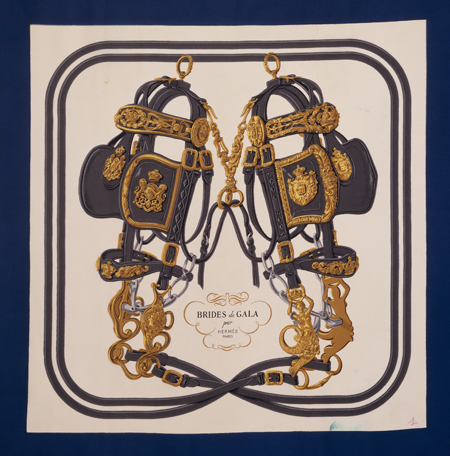 These carrés have become inseparable from the Hermès brand. This one first appeared in 1957 and depicts a set of festive bridles. Designed by Hugo Grygkar, who is among Hermès’s most prolific scarf designers. Collection of the Conservatoire des créations Hermès, Paris (c) Studio des Fleurs

As visitors wander through this delightful exhibition, produced by Pointe-à-Callière in close collaboration with Hermès International, they will come to understand some of Émile Hermès’s passion. A lover of horses and all things equestrian, Hermès spent his life collecting thousands of works of art, paintings, books, rare and unusual objects, or stylish everyday items from a bygone era.

A tribute to the horse

Founded in Paris in 1837, Hermès International began as a maker of harnesses and saddles at a time when horses ruled the streets. Under the leadership of the founder’s grandson Émile Hermès (1871–1951), the firm truly took off, adapting its products to the new lifestyles of an elite clientele. A sign of wealth and power, the horse was long associated with the monarchy, nobility, bourgeoisie, and prestigious racing stables. But as the automobile began to replace the horse in daily life, the saddle maker-turned-leather merchant and avant-garde couturier realized the urgency of preserving the precious treasures of equestrian heritage.

Acutely aware of the horse’s enduring appeal, Émile Hermès was able to transfer the traditional values and know-how involved in making saddles to creating high-quality leather and other goods. He also cared about innovating while at the same time maintaining Hermès’s international reputation. Visitors will be able to see many of the collector’s personal possessions, including the impressive rocking horse used by all of his children, and to discover a family business that has remained true to its values and that uses the past to inspire its present and future. 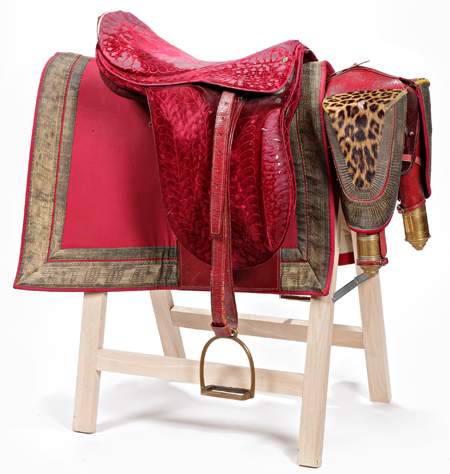 On the horse’s trail
Saddles, stirrups, spurs, and other horse tack from around the world are just some of the many objects along the horse’s trail, which takes visitors on a journey from Antiquity to the Renaissance to the 20th century.

The time of horses and carriages
Gradually, the horse’s role moved from utilitarian duties to more leisurely pursuits such as riding, hunting, racing, and horse shows. Horsewomen feature prominently in the collection: sidesaddles and riding habits, along with a host of women’s equestrian accessories, are sure to surprise. Many objects, such as cases, bags, saddlebags and trunks, illustrate Hermès’s smooth transition from saddle maker to luggage maker. Ever mindful of innovation, Émile Hermès journeyed to North America during World War I on a mission to supply the French cavalry with horses and harnesses. Among the items he brought back from his stay on this side of the Atlantic was an innovative system that he would adapt for use in his creations and for which he procured a licence in France that was, for a time, exclusive: the zipper. He considered the many ways to use the new fastener and adapted it to leather accessories, travel items, ladies’ handbags, and sports clothing.