A few months ago, I was in Montserrat, a tiny volcanic island that looms out of the Caribbean Sea a short flight or ferry ride from Antigua. During my stay (where I was scouting out their national dish called Goat Water and pursuing my passion for volcanoes), I was hosted at Olveston House, a gracious plantation-style guest home owned by music legend Sir George Martin.

Known as the “Fifth Beatle” for his pivotal role in the success of The Beatles, he also acted as the record producer behind many other top bands and musicians of the 1980s such as The Police, Dire Straits, Elton John and other superstars. He purchased Olveston House in the early 1980s and it was the temporary home for many visiting musicians who came to record at George Martin’s AIR Studios. In the hallway at Olveston House, you can see a gallery of photographs taken by Linda McCartney and dated 1983, which would mean they were taken when she was 42 years old. 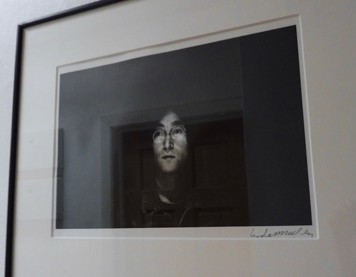 According to Carol Osborne and Margaret Wilson who manage the Olveston House’s acclaimed restaurant and guest home, Sir George Martin returned to his beloved island of Montserrat every year, even after AIR Studios was destroyed by Hurricane Hugo in 1989.

During the first few days of my stay at Olveston House, I was alone much of the time. It was the off-season and not many other visitors were around. As a result, I had my choice of guest rooms and was honoured to be checked into Sir George Martin’s very own bedroom. It was a modest room with simple decor featuring a French door that led to an expansive wrap-around deck and high ceilings with a fan that circulated lazily throughout the sultry day and night. If it weren’t for the framed record album of “Give My Regards to Broad Street” mounted on the wall, you’d never guess the room was a retreat for one of the world’s most famous music legends. While lying in the bed at night, listening to the tree frogs peeping outside and the warm wind blowing through the old-growth trees on the estate, I imagined how soothing it must have been for him to escape his busy life as an international record producer and retreat to this quiet, get-away-from-it-all, island.

A deceptively sleepy island, it should be noted, as beneath its lush slopes, the Soufriere Hills volcano continues to bubble, gurgle, puff sulphuric fumes and otherwise make its presence known. In fact, as I learned from an expert at the Montserrat Volcano Observatory, the Soufriere Hills volcano is classified as a complex stratovolcano and has many lava domes beyond its main summit. 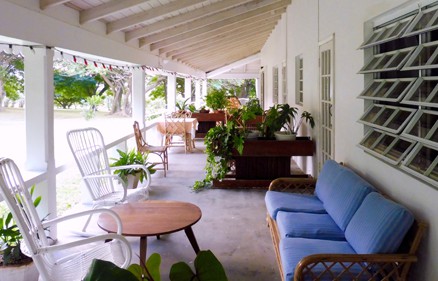 The comfortable veranda at Olveston House

While there, I also learned that due to illness, Sir George Martin would not be able to return to Montserrat in 2016 to celebrate his birthday as he had been doing every other January.  I was sorry to hear he passed away a few short months later on March 8, 2016. He was 90 years old.

He leaves a rich legacy of music, admiration and love on Montserrat. His generous contributions raised millions of dollars to help rebuild the island after the devastation of first Hurricane Hugo and then the eruption of the Soufriere Hills Volcano in 1995.

Olveston House: George Martin’s guesthouse, as well as the restaurant, are open to the public. Each Friday a popular Pub Night takes place at Olveston House while every other Wednesday a Buffet BBQ is served on the terrace. www.olvestonhouse.com

Hilltop Family Centre and Coffeehouse: Browse a fascinating collection of music memorabilia at this coffee shop and restaurant operated by David and Clover Lea. gingerbreadhill.com/hilltop-coffee

Official Visit Montserrat Tourism: Beyond its musical history, there are many reasons, such as snorkeling, volcano tourism and diving, to visit the island of Montserrat. www.visitmontserrat.com