Jon Anderson’s distinctive and soaring voice was part of what gave Yes their unique progressive rock sound for their multiple hits that included Roundabout, I’ve Seen All Good People, Wonderous Stories and fuelled decades of sold-out concerts. Jon split from the band when he wanted to pull back from the near-constant touring. In the mid-80s, Jon and Jean-Luc Ponty (one of France’s celebrated jazz violinists) discussed the possibility of working together. Thirty years later, the two musicians began performing together, and released a live album in late 2015 from their concert recorded in 2014. Jean-Luc and Jon have formed a band of seasoned jazz musicians and are touring North America.  I recently spoke with Jon about the upcoming Anderson Ponty Band tour and their May 26 concert at Theatre St. Denis show, produced by my friend Rubin Fogel. Rubin has a knack for obtaining the Montreal, Ottawa and Maritime dates for many talented performers. 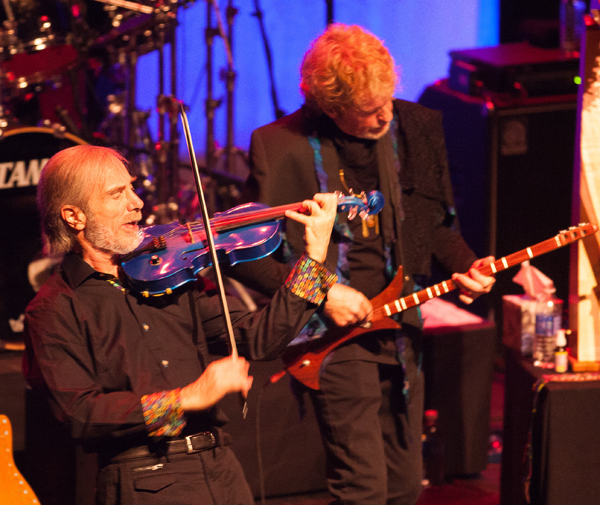 “Jean-Luc and I had discussed the possibility of working together as far back as the 1980s. We finally did when we recorded Better late Than Never in 2014 at the Wheeler Opera House in Aspen, Colorado. The album was released last September, and we’ve been touring to support it.”

“Jean-Luc and I are like musical brothers. He sings with his violin while I sing with my voice. Our band members are all jazz musicians, and they are very comfortable playing our songs. They bring a freshness to songs like Roundabout and Owner Of A Lonely Heart, And You And I that I wrote with Yes. ”

“Montreal has always been welcoming for me when I was with Yes, and Montreal Jazz Festival audiences have been very receptive to Jean-Luc. So we’re really looking forward to our date at the St. Denis Theatre. You have to be good, put on a great show to be accepted no matter where you perform.”  The band of jazz musicians includes; Jamie Glasser, Wally Minko, Keith Jones and Rayford Griffin.

The Anderson Ponty Band will perform at Theatre St-Denis 2 on May 26 at 8pm. Tickets are available at 514-790-1111 and www.theatrestdenis.com Enjoy!