Art promoters and galleries continue to publish editions of graphic works from major artists to commemorate an innovative period of art history in the western world, wherein all concepts of aesthetics and art flowed concurrently. Thus making works by these masters more prevalent and affording any patron of the arts the opportunity to expand their collection and possess a remnant of art history. 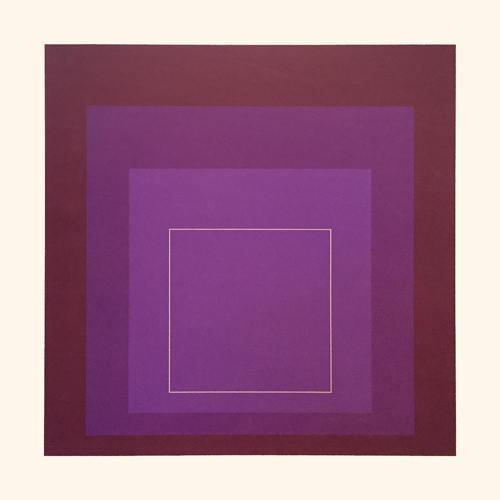 Josef Albers (1888-1976) ― Josef Albers, a German-American painter, graphic artist, designer and influential teacher, explored color relationships between them in their geometric abstractions. Albers began to study the optical interaction phenomena between two neighbouring colors. Albers’ ‘Homage to the Square’, started in 1953, marked the pinnacle of his research on the interactions between the colours. This Bauhaus artist has been the mentor to generations of noted American post-war artists.

Pierre Alechinsky (b. 1927) ― Pierre Alechinsky, founding member of CoBrA in 1949, was an exemplary advocate of the unexpected. Alechinsky often blended subjects and narratives with ease, embracing accidents and working regularly in series. His lyrical abstraction – a combination of Oriental mark making and iconography reminiscent of Paul Klee – can be found in book illustrations, prints of many variations, films, drawings, sculptures, and paintings.

Walter Bachinski (b. 1939) ― Walter Bachinski has had a long and distinguished career as a printmaker, sculptor and painter since the 1960s. He has studied with grandmaster print makers like Fred Hansen and Mauricio Lasansky. Bachinski has been regarded as one of the most important Canadian printmakers due to his figurative work of self-interpretation. His pastels, drawings and sculpture can be found in notable collections such as the Macdonald Stewart Art Centre, the Art Gallery of Hamilton, the Kitchener-Waterloo Art Gallery and the Montréal Museum of Fine Arts.

Georges Braque (1882-1963) ― Georges Braque was a 20th century French painter best known for co-inventing Cubism alongside Pablo Picasso. Braque used the styles of Impressionism, Fauvism and collage, and even staged designs for the Ballet Russes. His style changed throughout his career, portraying sombre subjects during wartime, and more jovial themes in between. However he never strayed far from Cubism.

James Brown (b.1951) ― James Brown is an American-born artist and art star of the 1980s and 1990s in both Europe and New York. He was most well known in the 1980s for his rough semi-figurative paintings, bearing affinity to Jean-Michel Basquiat and East Village painting of the time, but with influences from primitive art and classical Western modernism.

Leonardo Cremonini (1925-2010) ― Leonardo Cremonini was born on 26 November 1925 in Bologna, Italy. He studied at the Academy of Fine Arts in Bologna and the Brera Academy in Milan. After receiving a scholarship from the Parisian government, he moved to France where he soon would become known as one of the leaders of a new figuration movement. In 1964, Cremonini exhibited at the Venice Biennale. In 1967, he got the Marzotto International Prize and in 1979, the Prize from the Italian President of the Republic.

Salvador Dalí (1904-1989) ― Salvador Dalí was a leading proponent of Surrealism, the 20-century avant-garde movement that sought to release the creative potential of the unconscious through strange, dream-like imagery. Dalí was a prolific writer and early filmmaker who cultivated an eccentric public persona.

Antony Gormley (b.1950) ― Antony Gormley, a British-born artist, is widely acclaimed for his sculptures, installations and public artworks that investigate the relationship of the human body to space. His work has developed the potential opened up by sculpture since the 1960s through a critical engagement between his own body and those of others in a way that confronts fundamental questions of where human being stands in relation to nature and the cosmos.

Manuel Lau (b. 1967) ― Manuel Lau’s diverse cultural background comes to the forefront in his series of prints and paintings. Lau is a Peruvian born artist of Chinese heritage, now working out of Montréal, Canada. His varied cultures are referenced in his artwork through the juxtaposing of faces, insects and animals with everyday objects. Bicycles, helmets, gloves, and umbrellas appear among Latin American beings, fossilized in an mélange that blurs the line separating the subject and the object. Injected into his imagery is a playful sense of humour and a foray into the profane.

András Markós (b.1950) ― András Markós studied fine arts at the Kunstakademie Ion Andreesseu in Kolozsvar, Romania. He worked in graphic art for many years, before turning his attention to curating medieval church art. His work is grounded in abstract expressionism and conceptual art. He frequently works in thematic series and often incorporates words and calligraphic ideas, as well as collage into his imagery. Markós works in myriad media, including painting on canvas and paper, lithography, serigraphy, etching, and ceramics.

Joan Miró (1893-1983) ― Catalan painter Joan Miró combined abstract art with Surrealist fantasy. His mature style evolved from the tension between his fanciful, poetic impulse and his vision of the harshness of modern life. He worked extensively in lithography and produced many murals, tapestries, and sculptures for public spaces.

Robert Morris (b.1931) ― Robert Morris played a pivotal role in the early development of Minimalism during the 1960s by creating simple sculptural forms, which were often used as props for dance performances. He was one of the first artists to use a textile form—felt—as the medium for ambitious sculpture, and his early works in felt manipulated the pliability and sensuousness of the material. Morris has exhibited in major retrospectives including the Centre George Pompidou, Paris (1995), and the Solomon R. Guggenheim Museum, New York (1994), since then earning his place among the most influential American artists of the late 20th century.

Pablo Picasso (1881-1973) ― A prolific and tireless innovator of art forms, Pablo Picasso impacted the course of 20th-century art with unparalleled magnitude. Inspired by African and Iberian art and developments in the world around him, Picasso contributed significantly to a number of artistic movements, notably Cubism, Surrealism, Neoclassicism, and Expressionism.

Jean-Paul Riopelle (1923-2002) ― Born in Montréal in 1923, Riopelle is an accomplished abstract painter, sculptor and graphic artist. In 1946, Riopelle moved to Paris, where he embraced the emerging Tachist movement and its spontaneous approach to abstract expressionism. Similar to American contemporaries, Riopelle was both celebrated and scorned for his radical technique, which involved applications that extended to dripping or even throwing paint onto the canvas.

Kumi Sugai (1919-1996) ― A painter, sculptor and print maker born in Kobe in 1919, Sugai was one of the first generation of the post-war Japanese artists to join the international avant-garde art scene. He was a pioneer who acquired Western style of painting and combined its essence with classical Japanese painting and calligraphy abroad.

Antoni Tàpies (1923-2012) ― Antoni Tàpies, for six decades, refined a visual language inspired by a wide range of sources that coalesce into a complex fusion of materials, gestures, and symbols. His explorations of Surrealist imagery early in his career served as the foundation for an ongoing investigation of the nature of physical objects and their materiality. Tàpies is regarded as one of the most important art figure in Spain after the Second World War. 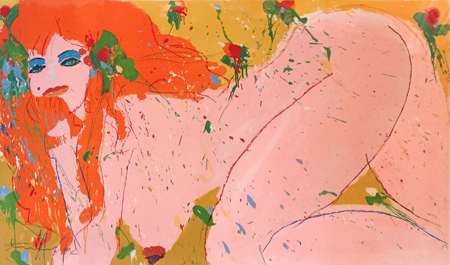 Zao Wou-Ki (1921-2013) ― A master of postwar art and the highest-selling Chinese painter of his generation, Zao Wou-Ki applied Modernist techniques to traditional Chinese literati painting. After moving to Paris, Zao had developed a unique style that was marked by contrasting colors and lyrical abstraction and that merged Chinese art, as viewed through the lens of European abstraction, with traditional Chinese landscapes. Zao’s paintings are abstract expressions of landscapes interwoven with his life experiences immersed in the Parisian art community with pivotal artists including Alberto Giacometti, Pablo Picasso and Joan Miró.

Leo Zogmayer (b. 1949) ― Austrian painter, Leo Zogmayer, studied at the University of Applied Arts in Vienna at Herbert Tasquil’s master class. His work evokes themes of the rehabilitation and new accentuation of beauty as an aesthetic core concept, cross-cultural discourses, art and spirituality, reductionist and iconoclastic aesthetic. As a conceptual artist, Zogmayer works primarily through the medium of language and text.