What propelled National Post columnist Barbara Kay to write a “revenge” novel, a novel she completed over a decade ago but only recently took out of a drawer at the urging of a colleague? With  A Three-Day Event one of Canada’s most controversial columnists makes her first foray into fiction. Loosely based on actual events, this murder mystery mimics cultural-political tensions in Quebec. What is unusual is the setting – an equestrian centre.

“Many non-fiction writers are curious to know whether they can pull off a work of fiction,” explained Kay. “I too wondered for decades, but it wasn’t until my daughter was betrayed by her mentor in horse sport that I found my inspiration. Suddenly my ten years of immersion in the fascinating world of high-stakes, three-day event competition opened a creative seam I had never thought possible.” 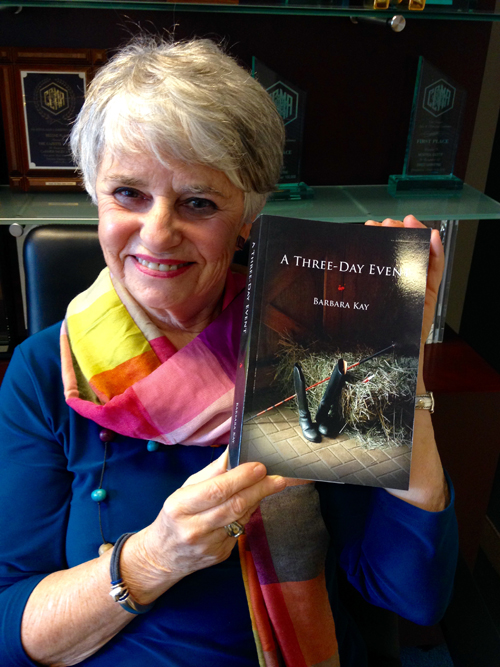 The good news is that you do not have to be an expert in dressage or horse jumping to enjoy the 463-page tome as Kay, in her meticulous way, has provided a Glossary of Terms as well as a summary of the characters. The story takes place in 1992 in the Eastern Townships where the mythical Le Centre Équestre de l’Estrie is playing host to a horse competition for Olympic hopefuls. Le Centre is suddenly jarred by a series of events. The walls of the stable office are suddenly found covered in anti-Anglophone graffiti and anti-Semitic slurs are hurled. A prized stallion is mutilated and the head stable boy found dead. Nearly everyone is a suspect.

Kay, who received an M.A. from McGill University and subsequently taught literature at Concordia University, especially likes mysteries. As she recently explained to her Post readers, “Even though for many years I have had a wonderfully satisfying job writing opinion columns, I long harboured the fantasy that one day I might write a mystery novel.”

The ongoing drama chronicled in her novel mirrors the controversy Kay’s columns often generate. She is prolific and not afraid to take an unpopular stance, whether writing about health care (“Infertility is not the responsibility of the state”), women’s rights (“Feminist chickens come home to roast at the Ghomeshi trial”), or dogs (“Why do smart people cry crocodile tears for vicious pit bulls?”). For the record she is not a fan of Barack Obama (“Marking the end of a hollow president’s feckless record on terrorism”), and had faint praise for Canadian leaders during the 2015 Federal election campaign (“Sure, Stephen Harper is a control freak, Justin Trudeau is preternaturally naive and Thomas Mulcair is a Quebec-Canada shape-shifter.”)

Kay’s mid-February column on anti-Semitism at McGill focusing on an upcoming motion calling for the SSMU (Student Society of McGill University) to support any BDS (Boycott, Divestment and Sanctions) campaigns on campus as well as “to pressure the university’s board of governors to divest from corporations complicit in the occupation of the Palestinian Territories,” certainly added to the conversation at an important juncture. The same day students voted to support the motion to “Boycott Israel,” the federal government condemned it. McGill alumni were also swift to respond, threatening to withhold donations should the BDS campaign against Israel succeed. By the end of the month the motion failed to be ratified and has now been “steadfastly” opposed by the university’s administration.

Another column by Kay (“Appeasing the Islamists in Quebec”) took on Bill 59, currently before the Quebec National Assembly. “Ominously, the bill would allow the QHRC [Quebec Human Rights Commission] to pursue websites that, in its estimation, describe and denounce the triumphalist ideology of Islamism,” writes Kay, and will “give offended individuals the power to have writers they perceived to have criticized Islam censored and punished by onerous fines.” In Kay’s view it is essential that writers continue to “exercise our freedom of speech to denounce Islamism and shame those who support it.” She goes on to ask: “If the future does not belong to those who have the right to say anything they want about the prophet of Islam, just as the past has belonged to those with the right to say anything they want about Moses, Christ, Marx and the Buddha,” then to whom does the future belong?

Those who think that Kay, a columnist with the Post since 2003, lacks a sense of humour need only read her column on “Rabbi Ron,” the head of her shul for the last four decades. In this sentimental reminiscence she recalls how the two first bonded “over our mutual love for the offbeat late night comic TV soap opera, Mary Hartman, Mary Hartman. It cracked us both up, and we’d lovingly retrace the best lines of the week at Kiddush after Shabbat services.”

Note: Barbara Kay is a regular guest on CJAD Radio. Her novel “A Three-Day Event” is available on Amazon. Her columns can be found at: www.barbarakay.ca