Breaking new ground with digital graphics and social media, Aislin is also preparing for a 2017 McCord Museum retrospective of his 50 years of cartooning

Most Montrealers know Terry Mosher by his nom de plume Aislin, the name he signs to his editorial cartoons in The Gazette. He has published forty-seven books, has been celebrated by his peers with numerous awards (including two National Newspaper Awards), and has been recognized as an Officer of The Order Of Canada for his charitable work and his contribution to political cartooning. Terry served ten years on the Board of Directors of The Old Brewery Mission. He is President Emeritus of the Canadian Cartoonists’ Association. 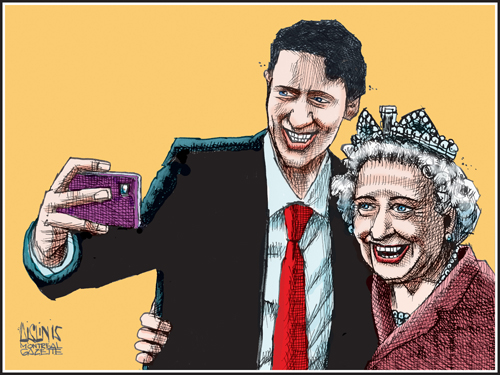 A popular speaker, he has appeared at national conferences such as Idea City in Toronto, the Banff Festival for The Arts, Montreal’s Canadian Club and numerous writers’ festivals. Terry has also served as a judge and participant in International cartoon competitions and other gatherings, most recently in Portugal, Turkey, China, Australia, Cuba, and South Korea.

In an era of rapid technological change, Terry has embraced the digital revolution as a tool that has enabled him to expand his creative repertoire. Closing in on 50 years of cartooning, he is now preparing for a 2017 exhibition of his work at The McCord Museum. It’s a long way from his artistic start doing portraits in Quebec City’s rue des Artistes. 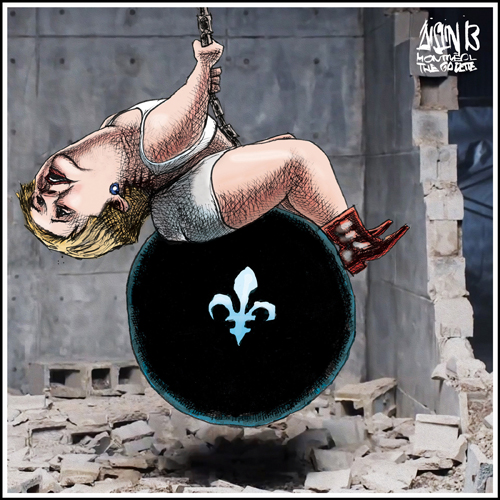 Pauline Marois on a wrecking ball remains a
personal favourite

Terry has always been a free spirit. He’s so good at his craft that he can get away with it. “I’ve never been to an editorial meeting in my life. I just go to my studio and draw.”

As acerbic as ever, during our interview, Terry commented on criticisms of his recent portrayal of former Prime Minister Kim Campbell as Miss Piggy; “Glad to know that after nearly fifty years I can still poke ‘em in the eye…” With the self-assurance of someone who is aware of his talent without being pretentious about it, Terry Mosher continues to enjoy the cut and thrust of political cartooning. He’s a competitive guy, and is proud that his thrice-weekly cartoons are the most popular feature in The Gazette, and also on the paper’s website. That’s why The Gazette’s website maintains an Aislin banner on the home page. “In fact, they post the cartoon as soon as I send it in; usually before the next day’s edition is even printed.” I love what I do. I’m now in the third year of a three-year contract. Will they cut me back to two – I’m ok with that.”

“As I get older; I’ve come to realize that you are what you don’t throw out.

It’s not just stuff – it applies to friends and what you do.”

Terry is in the process of going through 13,000 cartoons so he can get it down to a manageable quantity for the exhibition. “It’s bringing back a flood of astonishing memories. Christian Vachon from The McCord is curating the show, which will be titled 50 Years of Cartooning – from Trudeau to Trudeau.” 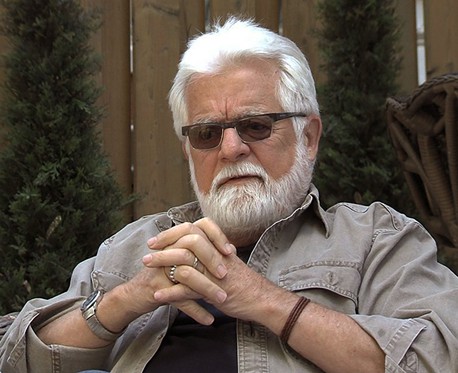 Born in 1942, Terry Mosher spent the first part of his life in Ottawa, where his father served in the Navy. Too old to serve in action, he worked in the PR department of the Navy and was involved in publishing the service’s newspaper. The family moved back to Toronto, but then moved to Montreal when Terry was 8, and remained here until he was 14. “That time here really formed me. Even back then, I really loved Montreal. When we moved back to Toronto and my dad was working PR for Loblaws, I’d hitch-hike back to Montreal on weekends whenever I could.”

“Our family life was not normal…it was wonderful!” Terry’s face lights up as he goes back in time. “My dad had all kinds of jobs as a writer, a carpenter, a PR executive, and hung out with artistic people – a long way from the idealized suburban life in the 50s. In Montreal he worked as a store detective at Ogilvy’s. We lived in the second floor of a carriage house just off Lincoln Street. John Little, the artist, lived below us. As a matter of fact – he’s my Godfather!”

“In Toronto, my parents continued with the ‘arts crowd’. June Callwood used to baby-sit me. My dad was pals with newspaperman Scott Young, and so I used to hang out with his son, Neil.” 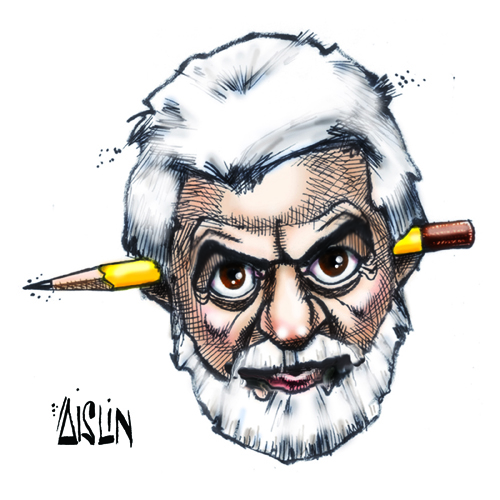 Terry really didn’t like being back in Toronto. He had always been a good student, but his interest in school flagged, and he began to get into trouble. “I was thrown out of high school – theoretically for possession of marijuana.” Terry was scheduled to do a speech on the drug trade, and was going to hold up two cigarettes to illustrate his presentation. One was a regular cigarette, and the other was – you guessed it, a joint – in the vernacular. His big mistake was telling a teacher at the Friday night dance about his speech and proudly showing off his props. “On Monday morning the police were swarming all over the school; and that was it for me.” Terry continues with a chuckle; “then they remembered that I was designing the yearbook, and they asked if I’d come back to finish it!”

“I became a juvenile delinquent for a while – but I wasn’t very good at it. I was too small to be a very good fighter, and I kept getting the worst end of fights.” It was time for Terry to move on. “I spent a couple of years hitch hiking around North America. I’d go to bars and do caricatures to make a few bucks.”

Terry eventually made his way to Quebec City, and staked out a position for himself in Artists’ Alley, known officially as Rue des Trésors. This was before it had become the well-known tourist attraction that it is today. Nevertheless, he was able to earn a living – enough to put himself through École des Beaux Arts. Our previously expelled high school delinquent graduated with Honours from art school – an accomplishment that still brings a warm smile of satisfaction.

After a short stint in New York, Terry moved to Montreal and worked at The Montreal Star. By now, Terry was married with two children. “I had a regular paycheque, a family and even though I’m the back-up cartoonist, life was pretty good.” However, Terry was feeling restless. “I had never been to Europe, and I really wanted to go. I applied for a Canada Council grant, and got $4,000 to go to Europe to study cartooning. I also made arrangements to do some freelance work, and got commissions from those jobs. So off we went, the whole family – my wife and children. We spent a year travelling around Europe.” 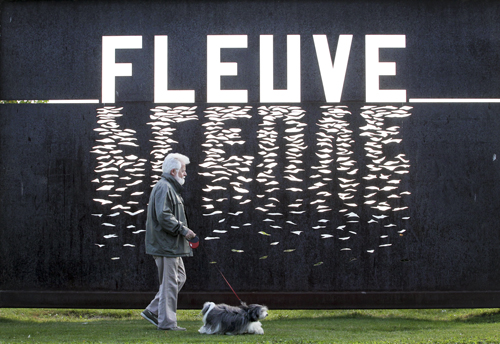 Terry and the family returned to Montreal and he resumed his duties at The Star as the back-up cartoonist and at Weekend Magazine. When he wasn’t promoted to replace the deceased regular cartoonist; Terry accepted an offer from The Gazette in 1972; where he’s been ever since. One of his first assignments was to go to Russia to illustrate the Canada Russia hockey series for The Gazette, Maclean’s Magazine and publishing house McClelland & Stewart.

In 1977 Terry won his first National newspaper Award for a cartoon depicting René Lévesque saying “We can’t afford to lose our heads.” A year later he won another for his cartoon of the new Pope playing the accordion. Terry has a photo next to his desk of Pope John-Paul being presented with the original Aislin cartoon. In 1984 Terry Mosher was inducted into the Canadian News Hall of Fame; the youngest person ever to be elected by his peers. “The fact that you are being recognized makes it very special.” A colleague of Terry’s suggested that he make way for other people. “It was good advice – and I stopped entering the awards”.

In 1992, Terry Mosher, former high school dropout and juvenile delinquent was made an Officer of the Order of Canada, and received his medal from fellow journalist, Governor General Adrienne Clarkson. It was particularly sweet, because Terry knew that he had previously been turned down; and that just ten years prior, Aislin had been denounced in The House Of Commons for a cartoon depicting the late Pierre Trudeau tripping an unsuspecting Brian Mulroney. 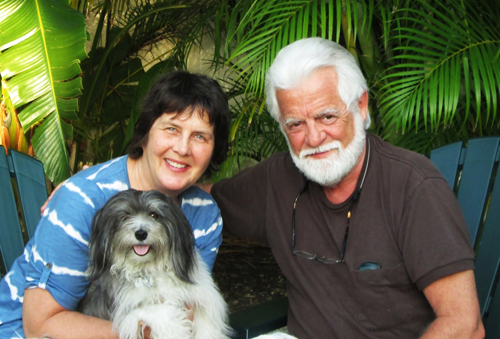 The Order of Canada is Terry’s favourite award. “The fact that somebody like me can develop a little talent and be very critical of the political and corporate elites, and still be recognized makes me very proud. I’ve received professional recognition, but to be included in the Order of Canada along with people who are there because they are good and decent people – who have made a difference in their community – is both humbling and uplifting.”

It wasn’t all smooth sailing along the journey. A battle with alcohol and a divorce were serious problems that had to be dealt with – and took a toll. However, Terry came out on the other side, and married Mary Hughson, an artist and a kindred spirit. “Mary is a better artist than I am – I’m just funnier.”

Today the couple share a comfortable combined studio space; an easel for Mary’s canvases and a drawing board and powerful computer for Terry. In addition to his prolific use of social media, Terry and Mary have been teaching themselves how to do animation. The results are stunning! Terry narrates the animated cartoons, complete with the sound of a pencil scratching his famous cross-hatch drawings. Mary has researched and developed a way to provide eye movements for Terry’s drawings.

Terry still has a weekly visit with Andrew Carter on CJAD to discuss politics and his week’s cartoons. “We’re on at 6:15 every Friday morning. After visiting with Andrew, I often go across the hall to spend some time with Terry Di Monte on CHOM.”

“As I get older, my outlook is changing. It’s not that you don’t have ambition – but its knowing where I am and being comfortable with that.”

With a characteristically villainous chuckle, Terry states; “When I finally do retire; I’m going to write a book; Memoire of Alias Aislin Stories. It’ll have all kinds of great stories about my adventures with people like Nick Auf der Maur.”

To keep up with Terry Mosher and Aislin, please visit his web site: www.aislin.com