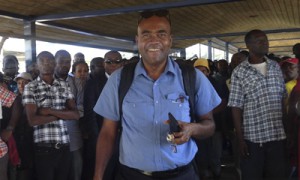 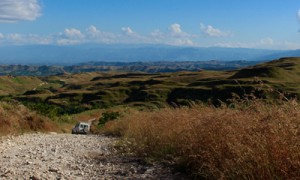 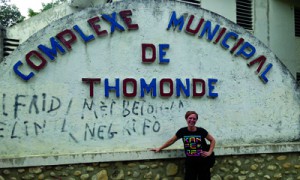 INTRODUCTION
In Creole the word KANPE means ‘to stand up.’ Our mission in Haiti (population: 10.5 million) is to empower rural families to become self-supporting. One of the ways we do this is by offering family programs in health, nutrition, housing, education, agriculture, and leadership. The key to our success is in partnering with local Haitian groups. Six years after the Haiti earthquake (2010) the country is encouraging development and we are proud to be part of that effort.

Although this was my first trip to Haiti as the new executive director of KANPE, which is based in Montreal, I knew from the moment I stepped off the plane in early December that I had arrived well-informed, having travelled to several developing countries including Central America, India, China, and South-East Asia. But what I did not expect was that I would return from Haiti with even more passion for my work than I had before I left Montreal a week earlier.

When you travel to Haiti your cultural experience starts the moment you board the plane. On my flight the travellers were overwhelmingly Haitian, wearing a mix of summer and winter clothes. People spoke in both French and Creole. When the wheels of the aircraft touched down on Caribbean soil, everybody applauded. At Port-au-Prince airport, I was welcomed by Fritz Louis, KANPE’s Field Coordinator. 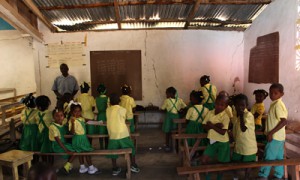 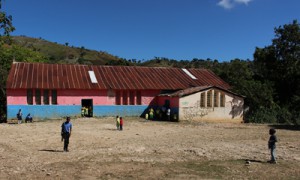 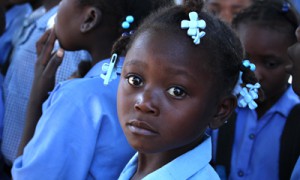 Plateau, where KANPE’s projects are based. In the city of Thomonde, we switched to a 4-wheel drive that could handle the rough country roads. Still, it took us almost two hours to drive 22 kilometers! The moment we arrived in the isolated area of Baille Tourible, we were welcomed by 200 school children and a local marching band.

After the welcome reception I stopped by one of the local schools. In Haiti, where the public school system remains a challenge, 80 percent of the schools are private and parents have to pay for their children to attend. When KANPE first started helping out in Baille Tourible there were no books, no pens, and no paper in many of the schools – only picnic-style tables, and in front, the teacher. To date we have invested in 13 schools. However, the need continues to be great which is why education is a priority for KANPE. In Haiti, it costs $100 US to send a child to school for a year. What better way to give a child the chance to break the cycle of poverty in Haiti? 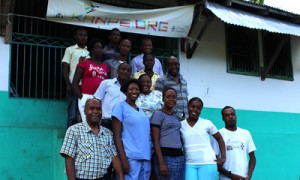 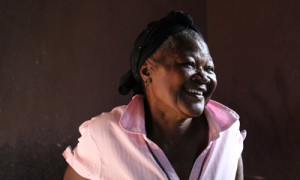 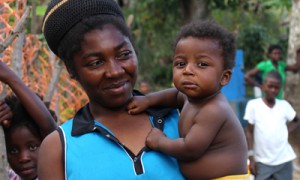 Ms. Oriana Louis, a clinic
patient with her son.

Here, 17 staff members are working to provide medical care to 7,000 people in the area. The clinic is operated by Zanmi Lasante (Partners in Health), one of KANPE’s main local partners. Haiti’s life expectancy rate is under 65-years of age and prior to the establishment of the clinic, Baille Tourible’s most vulnerable residents (pregnant women, children and the elderly) often died of treatable illnesses. Although resources are limited, the KANPE clinic offers free medical care. In 2015, there were a total of 7,331 visits which included (on average monthly): treating 162 malnourished children, processing 1,200 malaria tests, and training 95 women in Family Planning.

Agriculture: The quest for organic cabbage 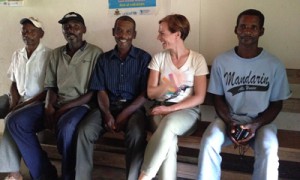 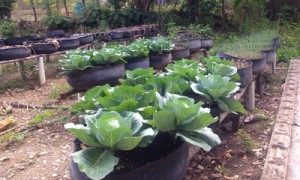 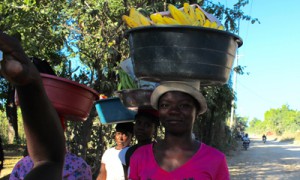 Women taking their crops to the farmers market.

I met with local farmers who explained the priorities they had identified for their community: “If you want to feed your family and send your children to school, you have to be able to work and own your family farm. We, the farmers of Baille Tourible, need livestock (cows, goats, pigs, chickens), seeds and training in farming techniques and reforestation.” These farmers also expressed the need for safer houses. As I was listening to them, I was proudly reminded of KANPE’s guiding philosophy: We don’t decide what the people need, we let them tell us. We are there to offer support and training to help move them towards financial independence. This is why we work with local leaders to identify and choose the projects we get involved in. And this is, in part, one of the main reasons why I chose to work for KANPE!

Family Support Program: It does take a village… 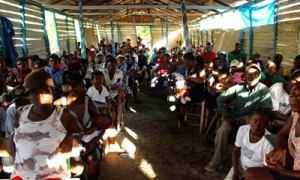 Two hundred families signed up to participate in the
second Family Support
Program. 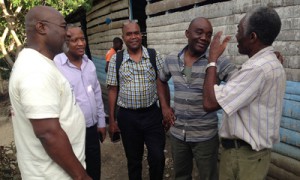 KANPE’s Haitian partners meet to discuss the success of the kick-start meeting. 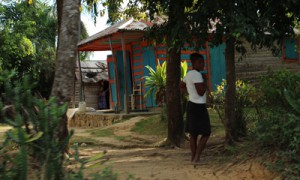 (Foreground) An improved Haitian house. Behind it is a house in serious need of
repair.

After leaving Baille Tourible we went to a neighbouring community called Savanette Cabral. At the kick-start meeting I attended there, 200 families were being welcomed by Fonkoze Foundation staff, another local partner of KANPE’s. During the next 18 months these families will receive coaching that will transform their lives, moving them closer to financial independence. How? To start, they receive a water filter, materials and training to build themselves a toilet, as well as assistance to reinforce the foundation of their house. To feed their family they will be taught to grow their own food and raise farm animals (pigs, goats, chickens). They can also learn how to operate a micro-business. This family support program costs $1,500 US per family per year. The result? A year after graduating, over 97 percent of the first group of participating families have maintained two sustainable sources of income, enabling them to provide for their family and send their children to school. These results are the reason KANPE; along with a private foundation also based in Montreal, continues to invest in this program.

Read about KANPE co-founder Dominique Anglade, who was recently named Quebec Minister of the Economy, Science and Innovation, in the December issue of The Montrealer or online: www.themontrealeronline.com 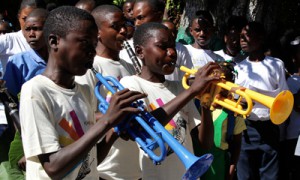 Denis (left) and Talcune play in the marching band. 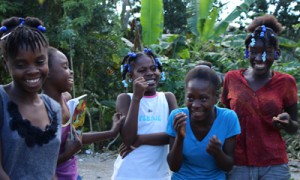 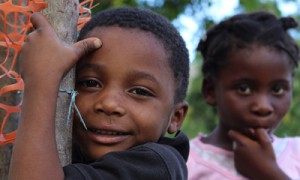 When the KANPE Foundation started working in Haiti in 2011, Arcade Fire played a concert there. Several young people in Baille Tourible were intrigued; they wanted to play in a band too. Régine Chassagne, KANPE co-founder and member of Arcade Fire, gave them the necessary instruments. However, the children had no idea what to do. A local instructor was found and while the music lessons are not officially part of KANPE’s program even we were surprised at the impact being part of this marching band has had. Not only have the children learned new skills but they exude confidence and exhibit pride in their community.

KANPE’s annual fundraiser event, KANPE KANAVAL, will take place on February 19 at the Society for Arts and Technology (SAT) in Montreal. Set in the cold winter of Montreal, echoeing Haiti’s warm carnival season! Last year, more than 1,000 revellers showed up to dance and to the warm Caribbean rhythms. This event celebrating Haitian culture is good fun for a good cause. All the proceeds of the night will go to the KANPE Foundation. International artists, along with Win Butler and Régine Chassagne from Arcade Fire will host the party. More info on our Facebook Event Page KANAVAL KANPE 2016.