With fifty miles of beaches, this eco-friendly upscale destination
appeals to both couples and families

Sanibel Island is an oasis of calm and civility; offering visitors a chance to relax and enjoy some of the world’s finest beaches on Florida’s Gulf Coast, adjacent to Fort Myers. We quickly learned that the island is also home to one of America’s greatest nature refuges and is a birder’s paradise. The Ding Darling National Wildlife Nature Refuge is a seven thousand acre sanctuary that is manned largely by volunteers. The story of its founding is also an interesting lesson in American history during the Franklin D. Roosevelt Presidency. In this article, we’ll tell you about our delightfully informative visit to the J.N Ding Darling National Wildlife Refuge, The Bailey-Matthews National Shell Museum, our outstanding cruise to Cabbage Key aboard Captiva Cruises Lady Chadwick, and a variety of restaurants that we visited for breakfast, lunch and dinner. We have friends who were highly complementary about their visits to Sanibel Island – and now we know why they are so enthusiastic. Canada is Sanibel’s biggest foreign market; and the destination enjoys an incredible 70% rate of repeat business – a worthy endorsement and evidence of visitor satisfaction.

Local citizens were decades ahead in their desire to preserve the natural and historical environment. As far back as the 50s and 60s, residents decided that while they welcomed economic development, they also realized that high-rise hotels (and subsequently condominiums) and national chain restaurants would compromise the island’s unique small-town quality. Their foresight and persistence resulted in ordinances that no building can exceed the height of a palm tree (45 feet), and there would be no national chain restaurants. The citizens also decided that they could live without traffic lights, and major intersections are still manned by shorts-clad Sanibel Island policemen directing traffic when necessary. Dolphins played in the ship’s wake,
delighting everyone onboard

The result of the 1960s foresight is that visitors today have a wide selection of locally owned and operated dining establishments offering excellent cuisine. Apart from the occasional Osprey nest, the tallest ‘structures’ are nature’s own palm trees. In a very agreeable way – there is an element of stepping back into a simpler time when visiting Sanibel Island. Bicycles have their own 37 kms (23 miles) of dedicated and paved cycle paths; well-separated from the roads where the speed limit is a gentle 35mph.

The height restrictions mean that there is a limit to the availability of hotel rooms and condo rentals. The result is that Sanibel Island and its neighbour Captive Island are lovely upscale destinations, with a good variety of beachfront hotel and condo suites available. Home rentals are also available. This neon sign-free zone is home to independent-minded owner/operator chefs who take great pride in their restaurants; from the kitchens to the dining rooms. The decor of each restaurant is refreshingly unique, from the Old Florida elegance of Casa Ybel Resort’s Thistle Lodge to the whimsical collection of odd items and family photos at the Island Cow.

Sanibel Island’s fifty miles of beaches and the warm waters of the Gulf of Mexico are the main attraction for visitors, including Bowman’s Beach; rated as one of the world’s Top 10 beaches. The gulf waters are home to the world’s largest population of bottle-nose dolphins. The beaches are popular with shell collectors, with 400 species of shells washing up along the shoreline. Canadian born actor Raymond Burr (star of TV mystery programs Perry Mason & Ironsides) was an enthusiastic shell collector, and he helped launch the Bailey-Matthews National Shell Museum in the early 1990s. The museum is informative, and visitors can learn how the shellfish act as a barometer to report on the health of the oceans. The museum’s collection includes shells from around the world. The J.N. Ding Darling National Refuge covers 7,000 acres
and is a birdwatchers delight

One of our favourite experiences was a visit to the J.N. “Ding” Darling National Wildlife Refuge. We signed up for the 90 minute guided tour in an open-air tram operated by Tarpon Bay Explorers. You can also drive the route – but we recommend the tour because of all the information that you receive from the well-informed and certified guides. The vehicles have roofs to provide protection from the sun, but the open sides are ideal for photography and for getting a clear view of all the wildlife, which included otters, birds, tree crabs and very large alligators sunning themselves beside the roadway.

J. Norwood Darling was a political cartoonist for the Des Moines Register, whose “Ding” cartoons were nationally syndicated and won him two Pulitzer Prizes. He visited Sanibel Island, and after seeing the wide variety of birds and wildlife – he campaigned for a part of the island to be designated as a nature refuge. Darling brought his campaign to his friend President Franklin D. Roosevelt, who then challenged Darling to take on the job heading up the United States Department of The Interior. Working in tandem with Roosevelt – who initiated the United States National Park System – Darling helped to designate three million acres of natural refuges. At his urging, President Truman created the Sanibel Island Wildlife Refuge in 1945, and in 1967, the expanded refuge was re-named The J.N. ‘Ding’ Darling National Refuge to commemorate the conservationist’s contributions. This alligator was sunning itself in the Ding Darling Nature alligator

“Interrupt me please!” After introducing herself, our guide Wendy – a nineteen-year veteran at the Darling National Refuge explained that she relies on her passengers to spot birds and other wildlife along the way. She explained that the visitor is the focus in a National Park, whereas a Refuge is wildlife-centered. Wendy informed us that the sea grass meadows absorb carbon at a rate of 3:1. The refuge is a birder’s paradise, with over 240 species of birds, including Ibis, pelicans, the stately Osprey and many rare birds.

We also saw several alligators sunning themselves – and we were warned that these dinosaur creatures can lunge the length of their bodies. So use your zoom feature for a close-up! We also saw otters, tree crabs (yes, there is such a creature) and many species of birds. The eco-system of the warm, shallow waters of the estuary support an abundance of fish, and consequently birds of prey such as Osprey have an abundant food supply. You’ll also learn how the Mangrove forests at the waters’ edge absorb pollutants and stabilize the shoreline from storms.

There is an excellent interpretive pavilion within the refuge, well worth a visit during your tour. We purchased a Duck Stamp; another Darling initiative that is both a permit for duck hunters throughout the USA, and it is also a commemorative stamp that provides $5.2 million annually to help finance Nature Refuges throughout the United States. Accessible only by boat, the Cabbage Key Restaurant and Inn
is a favoured destination of Jimmy Buffet,
Julia Roberts and Kevin Costner

Jimmy Buffet is said to have written Cheeseburger in Paradise based on his visit to Cabbage Key, and we sailed aboard the Lady Chadwick operated by Captiva Island Cruises to follow Jimmy’s lead. Access to Captiva Island from Sanibel Island is via by a small bridge; and it’s a leisurely drive up to the Lady Chadwick’s mooring at the elegant Sea Island Resort marina. The small ship is comfortably equipped with a snack bar, coffee and a well-stocked bar. Our sailing was on beautiful sunny day in mid-December, and the majority of passengers enjoyed the sun and the view from the upper deck. Captain Sean McGarry provided a running commentary during the first half of the cruise, which included a lot of interesting historical information; including about how sport fishing for Tarpon helped to open up the tourism industry. Several dolphins swam alongside, playfully surfing in the ship’s wake. It was entertaining to watch these wonderful creatures at play. Cabbage Key itself has an interesting history. The island was purchased for $2,500 by novelist Mary Roberts Rinehart, the American equivalent to Agatha Christie. Rinehart was the first author to negotiate royalties. The author sold her island to the Stoltz family, who converted the house to an inn with 6 rooms. The bar is papered with thousands and thousands of dollar bills, most with the name of the person who affixed it to the wall, ceiling, or any other flat surface. In addition to Jimmy Buffet’s, you’ll also see bank notes from Julia Roberts, Kevin Costner and a host of other famous and near-famous visitors. Bills that fall to the floor are collected and an annual donation is made to local charities. After climbing the water tower for a 360 degree view, we took in an interesting nature walk with descriptions of the local flora and fauna; and a warning to be on the lookout for a ‘nuisance’ alligator. With a departure at 11am and return at 3:15pm; this excursion takes a big part of a day – but worth every minute. It was an entertaining way to take in a history lesson, enjoy two one-hour cruises in the sheltered Pine Island Sound, see dolphins playing up close, and enjoy a laid back lunch.

After saying goodbye to the Captain and crew of the Lady Chadwick, we enjoyed a leisurely visit of Captiva Island. Andy Rosse Lane is the centre of activity; with quirky shops, art galleries, charming B&Bs, and several bars and restaurants. The Mucky Duck is right on Captiva Beach, and is the perfect place to watch the fabulous sunsets, which often have a flash of green just as the sun sinks below the Gulf horizon. If time permits, take in the Bubble Room, where you’ll find decor that mixes Christmas, nostalgia, Hollywood and a few other themes all rolled into a great big bubble-gum-pink ball of fun. On our way back to our accommodations at Casa Ybel, we stopped to visit Bowman’s Beach in the late afternoon. It’s a public beach with wide open vistas, soft white sand and a great place to collect shells.

Sanibel Island offers visitors a different Florida experience, one that features first class accommodations in low rise condominiums and resorts, terrific owner-operated restaurants, outstanding beaches and a rich history going back to the Calusa Indian tribes who successfully defended their territory against the Spanish Conquistadors. Sanibel and Lee County have been the refuge of American Presidents such as Franklin D. Roosevelt and more recently the Bush family. Industrialists such as Thomas Edison, Harvey Firestone and Henry Ford also built homes in Lee County. Sanibel Island continues to offer an affluent and stress-free vacation environment that appeals to visitors who return year after year.

Editors Note: In our February issue we’ll have more information about some of the restaurants we visited, plus information and photos about the first class Casa Ybel Resort where we stayed during our Sanibel Island Experience. In the interim, we highly recommend this oceanfront full service resort for couples and families. The resort has received Travel & Leisure’s “Top-20 Family Resorts” and Condé Nast Traveler’s “Best Places To Stay in The World” rating. www.casaybelresort.com

Air Canada has weekend direct non-stop flights from Montreal to Fort Myers during the winter months. We travelled before that with connecting flight through Toronto. 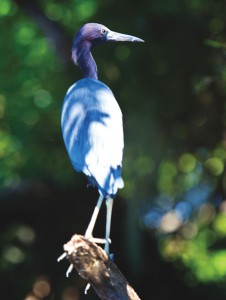