Montreal’s premiere jazz supper club is a very cool New York-style venue that is a favourite showplace for local and internationally famous musicians. Owner Joel Giberovitch states; “These stone and brick walls have absorbed do much music over the past twenty years, the musicians tell me that they can feel it.”

Five hundred musicians have performed at the club where Ranee Lee recorded her JUNO Award-winning live session. Upstairs Jazz Bar & Grill has been rated by Downbeat Magazine as one the world’s top 150 jazz clubs. Locally, the organizers of The Montreal International Jazz Festival asked Joel to be the Festival’s first off-location venue; and the club has been an integral part of the world’s largest jazz festival ever since, providing musicians an intimate performance space and a place to hang out during the Festival.

Upstairs has developed a favourable reputation with local musicians as an important place to play; and the club has become a favourite stop for touring international jazz artists. “We owe a lot to the late Len Dobbin. Len introduced us to many international musicians, and recommended that they play here at Upstairs when they were looking for a venue in Montreal.”

The club also provides all-important performance opportunities for aspiring jazz musicians studying at Concordia and McGill. Every Wednesday students from the Concordia jazz program play from 5 to 7pm. Tuesday and Thursday evenings from 5 – 7:30 pm, students from the undergraduate, graduate and jazz performance programs of McGill University’s Schulich School of Music perform jazz standards and original compositions as part of their course work. For audiences, it’s an opportunity to enjoy some exceptionally talented musicians.

From November 12 – 22, the Upstairs Jazz Bar & Grill hosted its own jazz fest to celebrate the club’s 20th Anniversary. During my visit to discuss the anniversary festival, Joel said; “We present live music every night – part of the reason for running a jazz club is because you like the music. We’ve had a lot of great shows, but there are some that I remember as being magical. I remember trumpeter Tom Harrell, pianist Barry Harris, guitarist Jeff Healy, and vocalist Sheila Jordan – who incredibly started her singing career at 50 and is still performing fantastic shows in her mid-80s.”

“We often host launch performances for new recordings, and we’re frequently a point-of-entry for emerging artists such as Adam Cohen, who performed here at the beginning of his career.”

The Upstairs 20th Anniversary celebration offered shows every night, starting (with all artists performing two shows nightly) on Thursday November 12 with the PILC/Hollins/Hoenig Trio, and continued November 13 with the talented Columbian jazz harpist, Edmar Castaneda. Ranee Lee will perform her Tribute to Billie Holiday on the 14th, and Emilie-Claire Barlow took the stage on Sunday, November 15.

Documentary film producer Guylaine Dionne screened her documentary about Upstairs at 6pm on Monday, November 16. At the time of our interview, Joel was looking forward to seeing the film; “Guylaine filmed here over the course of three years – and we’re excited to see the film ourselves.” Later that evening, drummer Jim Doxas hosted his weekly Monday jam sessions.

Drummer Jim Black performed his trio on Tuesday November 17, followed by Montreal favourite Oliver Jones on Wednesday the 18th. Jazz guitarist John Abercrombie and the John Abercrombie Organ Trio followed for two much-anticipated evenings on November 19 and 20. Re-Imagining Benny Goodman is the title of the Oran Etkin Quartet show on Saturday, November 21. The party wound up on Sunday with jazz/soul tenor sax player Houston Person performing with the Julie Lamontagne Trio. Person is famous for his renditions of jazz standards such as Moonlight In Vermont, Since I Fell For You and It’s Magic.

During his concert, Oliver Jones praised Joel for providing “such a wonderful place for us jazz musicians to play; and especially up and coming jazz musicians.” There is live music every night at the club, and the artists who performed during the 20th Anniversary festival are a representative sampling of the mix of talented local and international artists who regularly perform at the club.

Upstairs Jazz Bar & Grill is located at 1254 Mackay (just south of Ste-Catherine). For information on who is playing and tickets; please visit www.upstairsjazz.com or call 514-931-6808. Enjoy 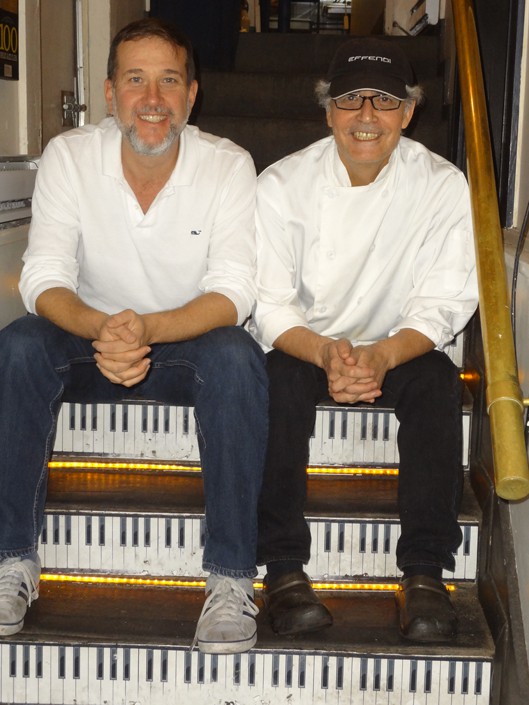 Joel Giberovitch and Chef Juan Barros met when they worked for Joel’s father in a Mexican restaurant. Juan accepted his friend’s invitation to head up the Upstairs kitchen seventeen-plus years ago; bringing an important contribution to the club. “Approximately 70 – 75% of our customers dine here; so the food component is very important to the ongoing success of our business.” adds Joel.

Soon after opening as a piano-bar club, Joel visited a variety of jazz clubs in New York City, and returned to Montreal with a clear vision of what he wanted to create with Upstairs. “Such clubs as The Village Vanguard, the Blue Note and Smalls left a big impression on me, and I came back inspired to give Montreal a New York-style jazz club.”

“The food we prepare has to be fresh,” Chef Juan Barros notes. “I’m very particular about our beef, and always insist on Canadian AAA, hormone-free beef. We don’t want to just have a ‘pass’ for quality – it has to be really good! That’s why we make all of our soups from scratch. Repeat business is important to this club, and that’s why we need to serve really good food at moderate prices. The fact that so many of our customers are regulars tells me that our combination of great jazz music and food is encouraging people to come back again and again.”