Thanks in large part to The Thinker  (Rodin’s pensive, seated statue); Rodin has garnered notoriety well beyond the aficionados of the art world.

Back in 1963, the Montreal Museum of Fine Arts held the first Rodin exhibition in Canada. Now, over fifty years later, the MMFA once again shines a spotlight on Auguste Rodin. Featuring almost 300 of his works, Metamorphoses: In Rodin’s Studio is the largest Rodin exhibit ever presented in Canada. Over 100,000 people have already visited the exhibit and learned about Rodin’s studio community that in 1900 employed about 50 people. Rodin sculpted the pieces in clay, but required models, stone carvers, bronze casters, patinators and others to execute the final result. 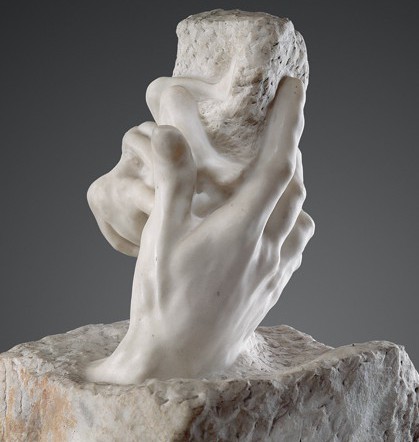 The first room, darkened by imposing charcoal grey walls, accentuates the seemingly glowing ivory-coloured marble of The Hand of God (on loan from New York’s Metropolitan Museum of Art). From out of a rough marble block, a smooth, detailed right hand emerges. The hand claps a smaller piece of rough-hewn marble from which the small, smooth, intertwined forms of Adam and Eve emanate. The piece not only speaks of God creating life, but also of the sculptor creating art. Rodin stated, “If we can imagine what God was thinking when He created the world, it is of modelling he must have thought of first of all. Is it not funny to make God a sculptor?”

Rodin’s love of Greco-Roman statuary and artifacts led him to collect over 6000 fragments of Egyptian, Greek, Hellenistic, Etruscan and Roman works. He paired some of these ancient terracotta and stone vessels with the female figurines he sculpted. Likened to flowers in a vase, these modern figurines planted in ancient containers comprise a little-known series that has never before been exhibited in the Americas. 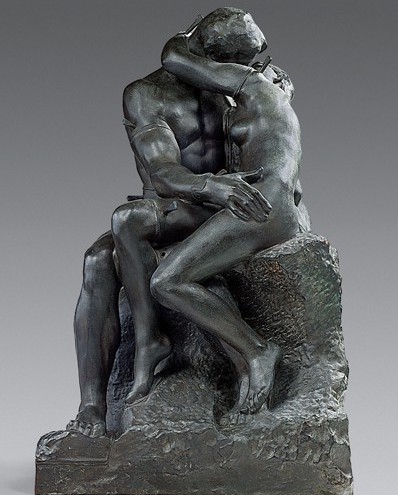 This extraordinary Rodin exhibit includes a selection of the museum’s recently acquired Eugène Druet photos. These photos of Rodin’s work do not utilize the neutral background and professional lighting commonly used to photograph art. Photographed in situ, Druet’s pictures are evocative and ethereal. Rodin saw the beauty of these images and included 71 of them alongside his works at a showing in Paris, in 1900.

The Burghers of Calais and Vancouver

In the Bronze room, after being enchanted by The Kiss and Eternal Spring, we are confronted by three over-sized, forlorn figures. These anguished statues are part of the six statues that comprise The Burghers of Calais. In 1884, the city of Calais, in northeastern France, commissioned Rodin to create a piece that would celebrate an event from the Hundred Years War. To spare the city from total destruction, six citizens would sacrificially give themselves up to Edward III. The statues depict the resigned torment of these heroic citizens as they walk towards their death. 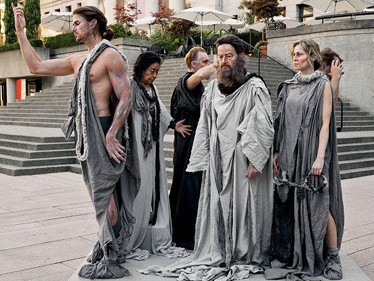 The Burghers of Vancouver

Further, along the exhibition, we have a modern take on the Burghers. The Burghers of Vancouver used live models to recreate the Calais original. Created by artist Adad Hannah and filmmaker Denys Arcand, six people from various backgrounds were hired to model the statues in front of the Vancouver Art Gallery. This tableau vivant included a ski bum, a poet, a laid-off worker, and an ex-junkie. Video screens, devoted to each model, play looped mini-films. 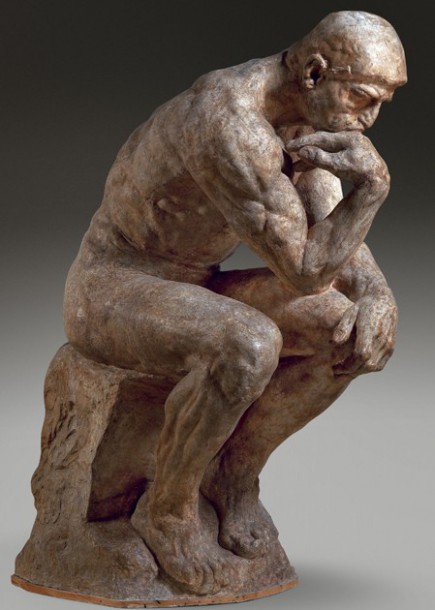 The final room is a tactile gallery, designed especially for the sight impaired. The small replicas of works from the exhibit and clay, plaster, marble and bronze material installations may seem anti-climatic following the formidable treasures found in the previous rooms, but nothing could be further from the truth.

I, like so many others around me, passed my fingers along the warm, rough marble and cold, smooth bronze. Then, I closed my eyes. In an instant, I discovered nuances and details that had eluded my vision. Placing my hand in The Thinker’s grasp, I can feel the minute curves of the joints and delicate indentations of the flesh. Running my fingers along the back of a leg, I can feel the muscular sinews and tendons stretching down through to the heel. “Viewing” Rodin’s work this way is enlightening and greatly adds to the appreciation of Rodin’s skill.