Montrealers will get their first opportunity to see international singing sensation and Tony Award winner Idina Menzel live in concert on Tuesday, September 1 (8 p.m.) at the Place des Arts as part of her 2015 Global Concert Tour.

“I am excited to finally perform in Montreal,” Menzel told me in a telephone interview.

Menzel’s name should be familiar for a whole bunch of reasons, notably her turns on Broadway smash hits such as Rent, Wicked and most recently If/Then. But it is her voicing of the character of Elsa in Frozen which made an extraordinary impact. The song “Let It Go” from the Disney hit’s hit soundtrack will be just one of many she will perform in Montreal.

The world tour includes stops in 39 cities. I covered a live performance of hers in Boston three years ago and Menzel lifts fans out of their seats with her singing and entertaining banter. She tends to take her shoes off and walk across the stage like it is her living room, telling stories from her life and often taking a lucky youth from the audience to sing with her.

“I try to keep my concerts fun,” Menzel told me. “Singing in front of live audiences is simply what I love to do.”

Menzel’s set list for the tour is said to include an Ethel Merman tribute, hits from her Broadway shows, plus “the songs you would assume” such as Let It Go. “Mostly I’m excited that for the first time I’m out there after having an actual hit song,” she says of the latter… “People knew songs from shows I was in but I finally have a song that was played all over the world on the radio. There are songs I have to sing or else the audience will be really upset then I kind of fill in the blanks. I like to keep things fresh. 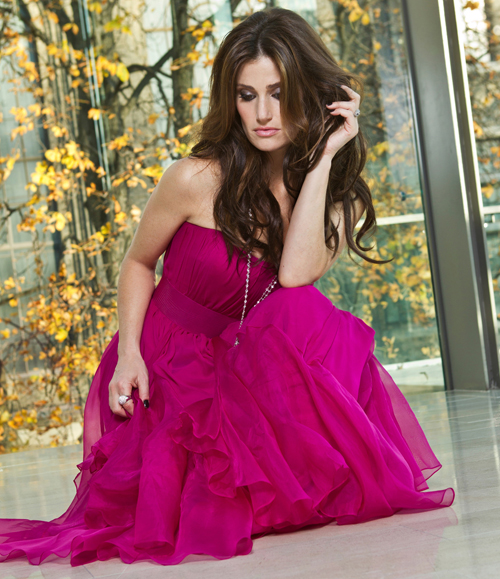 “This year has been a big year for me so the venues are going to get a little bit bigger than before. And the challenge for me is to keep the intimacy as much as possible. It’s really important to me that no matter how big the venues get, the audience still leaves having gotten their into my soul. I try to keep the stage as much like my living room as possible. I peel off the layers and talk about why these songs have been important in my life. The artists I’ve always loved in concert are the ones that tell stories and connect the music to their lives so that you leave understanding a little bit more of who they are as a real person.”

When I interviewed Menzel before the Boston concert she was just about to begin recording her scenes for Frozen. Like most people, she had no idea what a sensation it would become. “It was a career game changer, that’s for sure,” she said. “

“Anytime you do something with Disney, it has the potential to become big. I just never thought   it would become this kind of phenomenon. It presented me with opportunities I never had before while the impact it has had on young children is a real gift.”

The mom of a six year old boy, Menzel believes there will be sequel.

On March 2, 2014 Menzel was invited to perform the song Let It Go before millions of viewers on the Academy Awards broadcast. That is when actor John Travolta unintentionally catapulted her to even greater fame via a monumental error in pronunciation by introducing her as Adele Dazeem. While Travolta got raked over the coals by journalists and fans on social media, Menzel morphed into an even more adored personality.

“It’s the best mistake that ever happened to me,” she said. “Just having the kind of success where people might know my name – my real name! It took me a long time to stop chasing it and just embrace it. Yes, this turned out to be very god for my career although at the moment it happened I had to focus. There were millions of viewers after all. The fact is I got two Oscar moments out of it. How many people can say that?”

Menzel was referring to the more recent Academy Awards in which she was united on stage with Travolta to present an award for best original song. He took the opportunity to publicly apologize while awkwardly pinching her cheeks. She got a little pay back by introducing him as Glom Gazingo.

After the present tour, Mendel plans to help join the national tour of If/Then. “I want to be there for some of the openings,” she said. “This musical is dear to my heart. There are some television opportunities percolating. Of course I want to spend time with the family and get my son set in school.”

“It was my salvation, really,” she says about If/Then, “Yes, it explores a lot of intense themes that are close to my heart,” she added, “but to have the opportunity to be on the stage with the cast that I have and work through those things every day, it’s been a total gift. 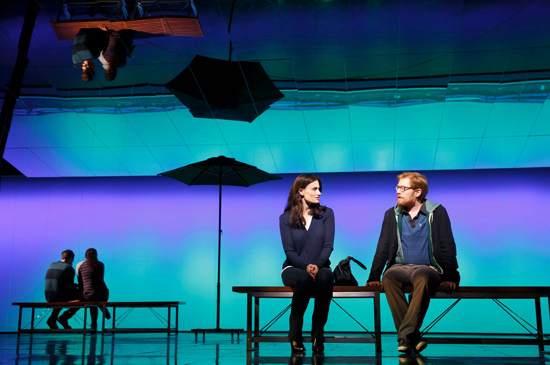 “Wherever I go and whatever I do, I always want to return to Broadway,” Menzel says. “That is the love of my life. I am always looking for my next project, probably an original piece and those can take time.”

How does Menzel prepare for a live show? “I work with my voice coach,” she says. “We do a lot of prep. It is like being a marathon runner. You do not just get up the day of the race and run. You train. I prep just like an athlete.”

Menzel makes no bones about it. She loves to perform before live audiences. “Ever since I turned 40 and had a baby, I have become really comfortable in my skin on stage,” she said. “I feel like I can really let loose and be myself. I love having the big orchestra behind me, having that magnificent sound and at the same time being able to get really intimate with the audience. I have finally figured out how to strike that balance.

“I’ve toured a lot in my life with different bands and different styles of music, but I stayed away from orchestras and symphonies for a long time, because I like to have a real intimacy with the audience, and I was afraid these big orchestras would usurp my ability to do that. But then I discovered that there’s a way to work with 80 musicians and make it feel like we’ve all known each other for years. I’m still able to explore my edgier side with songs like ‘Roxanne,’ but do it with an orchestra, which is really thrilling.”

Appearing in the hit TV show Glee, Menzel said, was an honour and exciting. “I was on it at two different times in my life,” she recounted. “One was after I had the baby and I was feeling very insecure about my weight and working, so I did not have as much fun as I could have. The second time was a year and a half later and I had a whole lot more fun. I love being part of such a groundbreaking show. It was great professionally.”

Menzel was born in Queens, New York. Her mother Helene is a therapist while her father Stuart Mentzel worked as a pajama salesman. Her grandparents immigrated from Russia and elsewhere in Eastern Europe. When she was 15 she began working as a wedding and bar mitzvah singer, a job which she continued throughout her time at New York University’s Tisch School of the Arts where she earned a Bachelors of Fine Arts degree in Drama. This turned out to be the prelude to her being cast in Jonathan Larson’s rock musical Rent. She changed the spelling of her surname to Menzel to better reflect the pronunciation the Mentzel family had adopted in America

Menzel says that performing at so many bar mitzvahs and weddings had a positive impact on her career. “For sure it played an important part in who I am and how I developed as a singer and performer,” she says. “I was only 15 when I started out, so this turned out to be a great educational experience as I was consuming all of this music. At these kinds of functions you get used to people not paying attention to you all of the time, so it helped me develop a thick skin.”

Menzel is proud of her Jewish heritage. “I grew up in a household that was not extremely religious,” she notes. “We were moderate. We had a strong appreciation and connection with the history of the Jewish faith and experience. We went to Temple and celebrated Passover. Over the years I have been known to perform the bat mitzvah I never had, putting my haftorah to music at some of my shows. I certainly reconnect in that way.” 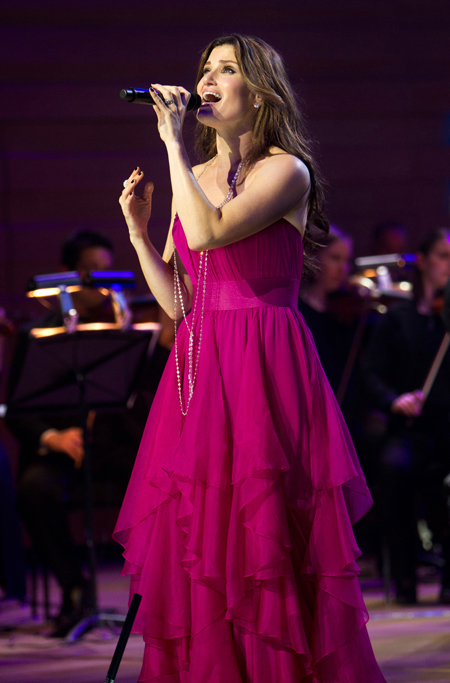 For her role in Rent, Menzel says she appreciated the 10 year break from the stage to the film version. “It allowed me to bring something new to the role,” she said. “I was able to approach the character in a different way, with more confidence; more understanding of where the character is coming from. So you have the best of both worlds. You have this unbridled passion and raw qualities when you first started and you believe 10 years later you can bring something new to it.”

Asked which roles were her favorite, she said playing Elphaba in Wicked truly changed her life. She has a warm spot in her heart for the Wicked hit song Defying Gravity, which she performed to much delight in Boston. “I sang it in the audition call-back and then sang it at home,” she recalled. “(I knew) this would be a special song for me. When I finally got to fly up in the air (as Elphaba) and sing, it was pretty awesome.”

Menzel also appeared in the 2007 Disney fairytale Enchanted, about a princess who winds up in modern-day New York City. It also starred Patrick Dempsey, James Marsden, Susan Sarandon and Amy Adams. “That was so much fun,” she says. “I loved being on the set surrounded with such gorgeous men. My first rehearsal was in a ballroom dancing where I had to learn how to waltz with Patrick Dempsey and James Marsden. It was a little surreal for me. I was all star struck and worried that my breath was bad because we danced so close.”

Philanthropy is also important to Menzel. She created the A BroaderWay Foundation in 2010 with her now ex-husband, actor Taye Diggs. This organization is dedicated to offering girls from underserved communities an outlet for self-expression and creativity through arts-centered programs. The emphasis is on building self-esteem, developing leadership qualities and striving for personal and social achievement. For more information, visit www.abroaderway.org.

Produced by Princeton Entertainment in collaboration with Rubin Fogel Productions, tickets are available at Place des Arts through the box office at 514-842-2112 or online at www.placedesarts.com