Whether it be through great choral works, sensational symphonic frescos, piano recitals or simply the meditative ambiance of sacred music, a season of discovery is the theme for this summer’s festival. For the 38th year of the Festival de Lanaudière, which runs from July 4 to August 2, Artistic Director Alex Benjamin invites music lovers to a varied season filled with audience-friendly artists. In addition to twenty concerts held at the Fernand Lindsay Amphitheatre and in churches scattered throughout the region, there will be four concerts at the Musée d’art de Joliette and two more at Salle Rolland-Brunelle, as well as four evenings of open-air film classics and four mornings of open-air yoga.

The meeting of great orchestras 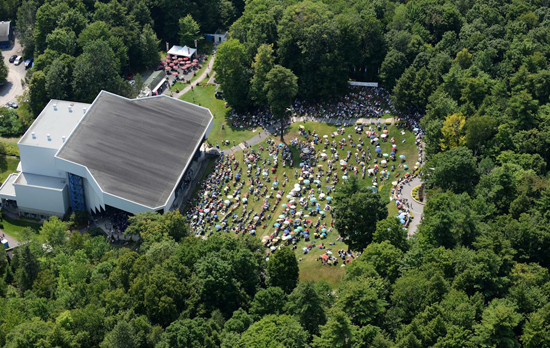 The Orchestre Métropolitain under the direction of Yannick Nézet-Séguin opened the festival perform on Saturday, July 4 with two inspired scores exploring sacred subjects. On the first part of the program is Bohuslav Martinů’s Frescos of Piero della Francesca. Following the intermission, the Mass No. 3 by Anton Bruckner, a composer whose grand and deeply soulful works Yannick Nézet-Séguin and the Orchestre Métropolitain have performed on numerous occasions both in concert and on disc.

On Sunday, July 5, Jean-Marie Zeitouni conducted I Musici de Montréal in a performance of Osvaldo Golijov’s Last Round, a work that pays tribute to the legendary Argentine tango, and in total contrast to this sensual dance form, Bach’s Concerto for Two Violins with Quebec soloists and Tchaikovsky’s Serenade for Strings.

Les Violons du Roy led by Mathieu Lussier return on Sunday, July 12 with an all-Mozart program. The charismatic American pianist Jeremy Denk will be making his Amphitheatre debut, as will be soprano Mireille Asselin. The program includes the dramatic Piano Concerto No. 20 and the brilliant Haffner Symphony, in addition to great operatic arias.

The Youth Orchestra of the Americas consists of one hundred musicians from the top orchestras in Canada, the United States, Mexico and various countries in South America. They will be stopping at the Festival in the course of their Canadian tour, on Sunday, July 26. With them will be pianist Ingrid Fliter, winner of the prestigious Gilmore Prize, in a program of three works with American connections: Ravel’s Concerto in G, Dvořák’s New World Symphony, and Carlos Chavez’ Sinfonia India. 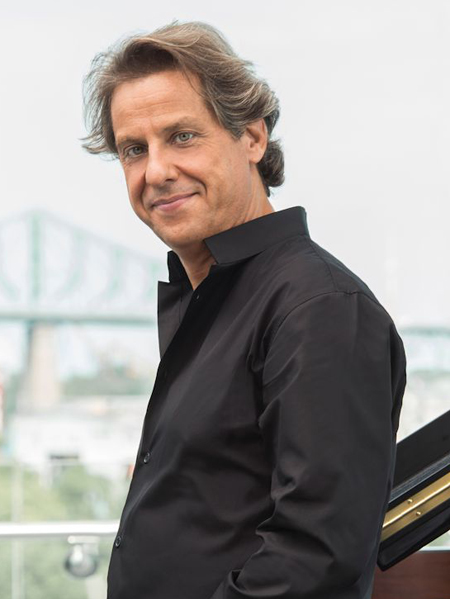 Pianist Alain Lefèvre is the Artistic Ambassador for the
Festival de Lanaudière and will perform
Grieg’s Piano Concerto with the Montreal Symphony
Orchestra on July 31
Photo: Caroline Bergeron

The Orchestre symphonique de Montréal, (OSM), conducted by Kent Nagano, will give two concerts in the final weekend of the season, on July 31 and August 1. On Friday, pianist and Artistic Ambassador of the Festival, Alain Lefèvre, joins the orchestra and its conductor for a popular favorite, Grieg’s Piano Concerto. This will be followed by Brahms’s Second Symphony. Sibelius’s Finlandia opens the program. The following evening, the OSM will be joined by the Festival Chorus and four leading vocal soloists – soprano Aline Kutan, mezzo-soprano Michèle Losier, tenor Michael Schade, and bass Christian Immler – for Beethoven’s towering Missa solemnis, conducted by Kent Nagano.

And finally, there is the Orchestre National de Jazz de Montréal under the direction of Matthias Rüegg to welcome you on Sunday, August 2 for a concert of discovery – or rediscovery – of a great jazz composer, Duke Ellington. The program includes such classics as Such Sweet Thunder, The Star-Crossed Lovers, and Take the A Train.

The festival observes the 100th anniversary of the death of Scriabin

Two concerts at the Fernand Lindsay Amphitheatre will be offered this season in observation of the 100th anniversary of the death of the great Russian romantic composer, Alexander Scriabin. The first of these, on Saturday, July 11, will bring to the stage the Festival Orchestra and Chorus under the direction of Jean-Marie Zeitouni. The program includes Scriabin’s stunning Poem of Ecstasy and Schumann’s moving, romantically lyrical Pilgrimage of the Rose.

The Scriabin celebration continues on Saturday, July 18 with an all-Russian program. Two famous works, Mussorgsky’s Night on Bald Mountain and Tchaikovsky’s Pathétique Symphony frame a performance of Scriabin’s Piano Concerto. The guest artists are two leading figures whose outstanding work is well-known to Festival audiences, conductor Christoph Campestrini and Benedetto Lupo, one of the great poets of the piano.

The tribute to Scriabin goes further. At four concerts in the churches, we have Alexander Melnikov on July 13, Avan Yu on July 14, Benedetto Lupo on July 20, and Stewart Goodyear on July 21, playing music of magic and marvels alongside important works by Mozart, Chopin, Liszt, Debussy, Ravel, and Janáček.

Tous En Choeur! – Everyone in the Choir!

The ever-popular “Tous en choeur!” this year brings together on the Amphitheare stage the Festival Orchestra and Fernand Lindsay Choir under the direction of Julien Proulx, along with soprano Marie-Josée Lord for a celebration of choral music. On Saturday, July 25, take a trip around the world with music by Rossini, Gounod, Mascagni, Smetana, Gershwin, Borodin, J. Strauss, Bizet, Puccini, and Verdi.

On Sunday, July 19, the contagious enthusiasm of gospel music from the Jireh Gospel Choir fills the air. Consisting of a dozen singers plus an instrumental ensemble, Jireh has traveled throughout Quebec, Canada, the United States, France and Italy in performances of this spirited and spiritual music. Under the rubric “Music in Memory,” the other three concerts at the Musée d’art de Joliette will celebrate Quebec’s cultural heritage. The first two, featuring violinist Victor Fournelle-Blain on July 27 and the Hochelaga Trio on July 28, will be devoted to composers who worked in Quebec from the 1920s to the 1970s. Concert-goers can rediscover the compositions of Auguste Descarries, Rodolphe Mathieu, Jean Papineau-Couture, Alexis Contant, Jean Vallerand, Maurice Dela, and Claude Champagne. For the third concert in the “Music in Memory” series, on July 30, the Festival presents “Tribute to Leduc, Borduas and Riopelle” by the composer Simon Martin. Three canvases by these giants of Quebec art history will be portrayed in music by three highly varied ensembles: the Contemporary Guitar Trio, the Quasar Saxophone Quartet and the Bozzini Quartet.

Ute Lemper brings her show “Last Tango in Berlin” to Salle Rolland-Brunelle on July 27. Her show is a unique and magical tour of the cabarets of Berlin, the cafés of Paris and the milongas of Buenos Aires evoked by her warmly emotive voice. Ute Lemper will sing songs of Kurt Weill (“Yukali,” “Surabaya Johnny,” “Bilbao Song”), Jacques Brel (“Amsterdam,” “Ne me quitte pas”) and Astor Piazzolla (“Yo soy Maria,” “Pajaros perdidos”) in addition to renowned classics of the Berlin cabarets (“Lili Marleen,” “Koffer in Berlin”) and French chansons (“Milord,” “La vie en rose”).

Shuttle Bus Service: On Friday and Saturday evenings (except the Fridays of July 10 and 24), the Festival Express will run a shuttle service from the Infotourist Centre on Peel Street in Montreal to the Amphitheatre. Return fare is $20, reservations required: 1-800-561-4343