In 1934, Tommy and Jimmy Dorsey formed a touring orchestra. Their group was well-received, but it didn’t last long. Following a dispute with Jimmy, Tommy stormed off stage during a show in May 1935. The pair remained estranged for decades afterward. It is now time to reunite the two Dorsey brothers by having both their orchestras on the same stage for the next BATTLE OF THE BANDS. 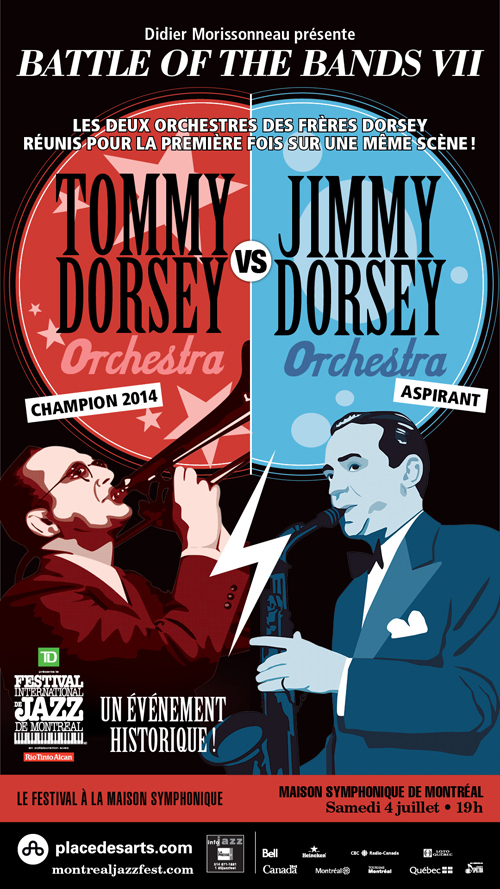 A mix of jazz and dance music, the unforgettable melodies of the Tommy Dorsey Orchestra brilliantly evoke the sound and feel of the 1940’s and define a whole generation. Stardust, Night and Day, Oh! Look at me Now, I’ll Never Smile Again are only a few of the songs immortalized by the brilliant combination of The Tommy Dorsey Orchestra and their singer Frank Sinatra . And now, this legendary Big Band, led by the excellent Terry Myers, tours the world to honour the magic of this incomparable team.  Twenty of the finest musicians and singers ever assembled!

Jimmy Dorsey had eleven number one hits with his orchestra in the 1930s and the 1940s: Is It True What They Say About Dixie?, Change Partners, The Breeze and I, Amapola, My Sister and I, Maria Elena, Green Eyes, Chasing Shadows, Lullaby of Broadway, Besame Mucho, and Pennies from Heaven with Bing Crosby. And finally, there was a late hit in 1957, So Rare, which went to the No. 2 position, and was on the record charts for 26 weeks. Now led by the legendary Bill Tole, the Jimmy Dorsey Orchestra travels everywhere in the world bringing its legend to new audiences.

The historic “BATTLE OF THE BANDS” featuring these two legendary orchestras on July 4th 2015 will have sentimental audiences on their feet as the music that made the whole world dance comes alive again. More than forty musicians and singers will gather on stage to defend their musical repertoires. It will be a musical showdown featuring unexpected twists, good-natured ribbing and an evening of pure entertainment as these great adversaries battle it out.