Some – perhaps many – couples gradually ease into a marital complacency over time, with affection replacing passion. Nicola Cavendish as Lily and Christopher Hunt as Morgan are cast as a typical upper-middle class couple who face this situation – although they don’t recognize that it has happened to them. Morgan is recovering from a heart attack, and Lily is a recently retired teacher. They are still getting used to living in a condo – after downsizing from a larger home. They bicker and natter at each other, as Morgan frets over his impending return to work and Lily badgers her husband about locking the doors. Their well-ordered life is proceeding in a well-ordered, albeit listless manner.

Thump, crash! – a homeless man stumbles into their bedroom and into their lives. Played by Montrealer Graham Cuthbertson, Parker is at once an innocent and alternately a man quoting Emerson and ruled by his desires. As with many homeless people, Parker is suffering from mental illness and he speaks and acts without a filter.

Nicola Cavendish returns to Centaur after her smash hit Shirley Valentine and For The Pleasure of Seeing Her Again. In her role as retired school teacher Lily Beaumont, she brings an authenticity to the role that made me wonder if she had indeed been a teacher. During a break in rehearsal, she stated; “It’s a gift for an actress to play a character like Lily Beaumont – you don’t get to do that very often. This is a script that you want to live up to.” Strong praise from a veteran stage and screen performer. 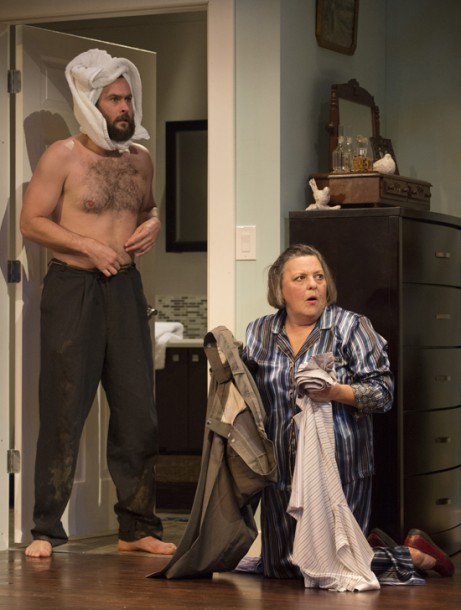 Cuthbertson has built a strong body of work in Montreal theatre, having played earlier this season in The Graduate and previous roles in Trad, August, An Afternoon in the Country, and one of my personal favourites, Dick Powell’s In The Mood For Jazz. He brings an edge to his roles, much like Johnny Depp – you’re never quite sure if his character might slip over the edge. “Roy has given me the opportunity to be in a different role – a physical comedy. It’s really fun to come to work and play this role.”

Playwright Colleen Murphy has produced a superb dark comedy that requires split-second timing and delivery by the three-member cast. The beginning of the performance produces laugh-out-loud comedic moments and madcap action, including a scene when Lily insists that Parker take a bath. “Keep scrubbing or else you’ll end up in prison, walking around in leg irons.”

Chris Hunt’s Morgan has periodic ‘acid flashbacks’ reminding many in the audience of their misspent youth… ”I can’t go around breaking laws at my age…this is the worst kind of acid flashback.” Hunt provides a solid foil to Cavendish’s energetic Lily; and we grow to appreciate his courage as his character develops within the play.

The second part of the play (it does not have an intermission) gets a little darker as Lily and Morgan come to grips with the lassitude of their marriage. In one defining scene, Morgan shows his courage as he faces down a fear that his business associates might find that he isn’t as tough as he was pre-heart attack. We then learn from Lily that growing up with her Aunties wasn’t always sweetness and light.

Under Centaur Artistic Director Roy Surette’s steady direction, the actors gradually reveal the psyche of their characters, provoking the audience to look inward – to ask ourselves if the action on stage is representative of our own relationships. Do we dare to be young again?

The issue of homeless people runs throughout the play – at times and undercurrent and then front and centre. Is mental illness to be feared and its sufferers avoided? Or do we reach out and accept them as they are – for a start. Once we’ve done that, the next steps aren’t that hard.

Surette leads a talented production team to create a set that is believable and highly professional. Are we in New York? A fine job of directing, outstanding acting and a terrific script combine to make The Goodnight Bird well worth a visit to The Centaur Theatre.

The Goodnight Bird continues until March 21, with an extra show on March 22. Please call the box office at 514-288-3161 or online: www.centaurtheatre.com Enjoy!