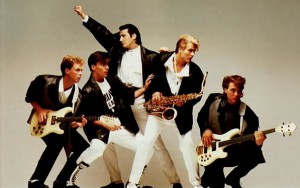 The radio-friendly sheen of Spandau Ballet’s biggest, most pervasive hits are familiar to anyone in possession of a radio or a laptop, anyone who was born in the last 50 years or indeed anyone who regularly goes to the movies or watches television – the group’s songs have been used in the Simpsons, Spin City, Charlie’s Angels, The Wedding Singer and Ugly Betty, as well as in advertisements for Coca Cola, Sony Ericsson, Caixa, Nissan, Nescafe, Pils and dozens more – while the band’s songs have been covered by everyone from the Black Eyed Peas and Nelly to Paul Anka and Lloyd & Lil Wayne.

Now they are bringing their Soulboys of the Western World Tour to Montreal!