NEW YORK, NY– In the pre-Depression building frenzy of 1927, a hotel property named Park Central, a nod to nearby Central Park, opened in Midtown West. In October 2013, following an immense multi-million dollar renovation, this landmark at 807 7th Avenue reopened to the public, unveiling elegant new interiors and welcoming guests to its gracious new accommodations inspired by Central Park and other iconic New York locations.

The property has been designed by award-winning architecture and design firm, Jeffrey Beers International, whose inspiration for the renovation stems from the hotels surrounding iconic landmarks and celebrated history. The ambitious renovation project was specifically designed to create a distinctive, stylish and guest-centric experience. 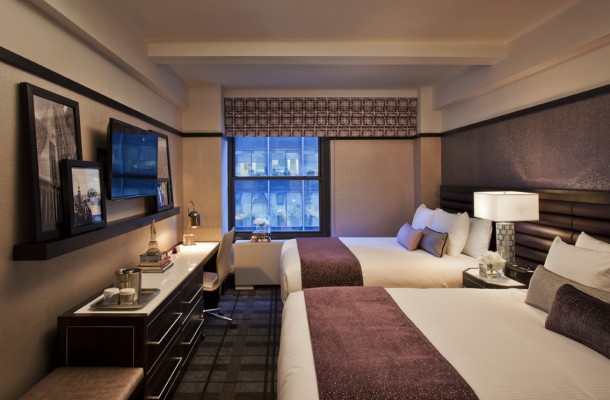 “Park Central has been a part of New York City’s history for close to a century, and we were excited to revive the hotel to reflect its original grandeur,” explained Park Central General Manager, Don Fraser. “In doing so, we retained the integrity of its architecture through a significant renovation, but updated it with handsome design and contemporary amenities to seamlessly weave together old and new.”

Park Central New York is a full service hotel catering to a wide range of travelers, with 761 guest rooms, a grand lobby and mezzanine, an expansive ballroom and a meeting space made up of over 15,000 square feet of diversified event areas, including 11 meeting rooms, one boardroom and one exhibition hall. It also houses Park Kitchen, a new signature restaurant and bar concept helmed by Executive Chef Nathaniel Eckhaus, as well as Central Market, a fine foods “grab and go”, and a state-of-the-art fitness center.

From the neutral palettes, tranquil ambience and authentic furnishings found in the hotel’s public spaces, to the handsomely outfitted guest rooms with tufted fabric headboards and dark-stained millwork details, it is evident that Beers allowed the property’s original personality to be showcased in his redesign.

“This was a special project for us,” said Jeffrey Beers, founder of Jeffrey Beers International. “Park Central has a long and distinguished history, and its location at the epicenter of New York City served as a true inspiration. We really viewed this project as a love letter to New York City.” 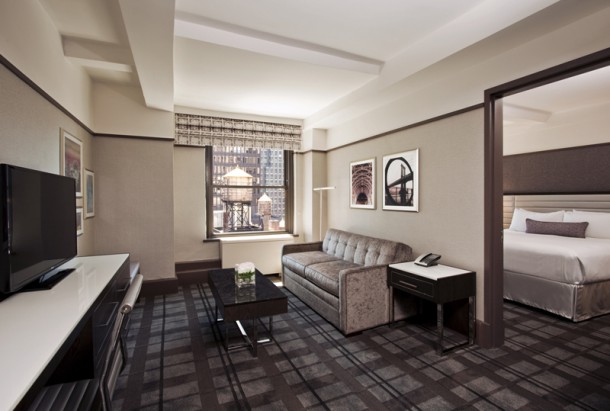 While this redesign is not the first Park Central has seen, it is the most significant to date. The property was originally a 1,600 room hotel, and was downsized to 1,450 rooms in the 1980’s, making it the city’s fifth largest hotel at the time, while operating as The Omni Park Central. By 2004, the hotel had been scaled back to 935, and it stands today at nearly half the room count of its original incarnation with 761 larger guest rooms

Since opening in 1927, the Park Central property has played host to many iconic celebrities and figures including Jackie Gleason, Frank Sinatra, Mae West and Eleanor Roosevelt, who kept a suite at the hotel. As it moves into its next era with a revived elegance, the landmark building continues its reputation as a premier destination.