Dr. Harry Rosen has enjoyed a successful career as a dental surgeon and Professor at McGill University’s dental school, teaching and mentoring students at the Montreal General Hospital’s clinic. Dr. Rosen is an active man, an avid skier and horseman; not someone given to long periods of relaxation. He began clearing rocks from the waterfront of their country home in the Laurentians, carrying them to the water’s edge to make a wall. “I matched the shapes so that the rocks held their positions and gravity did the rest.” Dr. Rosen went on to build a large Inuksuk, using flat rocks that he found on his lakeside property. The rocks were often very large, and he devised a system of using logs as rollers to move the stones to his sculpture; and then he built a block and tackle to lift the stones into place. Once again, small stone chips were used to level the stones and gravity held the sculpture together.

Dr. Rosen continued to create, and his sculptures and the materials he used became more sophisticated. He began to shape the stones with a grinder, and he developed a way of creating human shapes using hundreds of shaped stones, anchored with steel rods, hidden within the sculptures. The first figure developed was that of a man scaling a mountain side – originally developed as a finishing touch for a stone retaining wall for a cul-de-sac turn-around near his country home. This sculpture involved the use of a grinder so that Dr. Rosen could shape the stones into a more representative shape. Aptly named The Ascent this twenty ton sculpture was donated to The Jewish General Hospital, and is located near the Cote Ste-Catherine entrance to the Lady Davis Research Institute.

“It’s one thing to create the sculpture – but it required a lot of teamwork to prepare the site, move the sculpture, finalize the installation. Of course – we first had to have the donation accepted by the hospital management and board.” We were happily surprised at the generosity of our team. Burstell Towing offered to move the sculpture from the Laurentians to the Jewish General.”

Dr. Rosen was past his 80th birthday when The Ascent was installed; and he had to build the rock wall that would support the sculpture and serve as the ‘mountain’ being scaled. As is his nature, Dr. Rosen worked by himself, in cold and raw weather of November to prepare for the early December installation. Not realizing that Dr. Rosen was an artist-at-work; an older gentleman watched him toiling in his clothes covered in stone dust and called out; ‘Your employer must be a hard man – to make an old man like you work so hard in this cold weather!’

The installation proved to be a success, and other installations have followed at several hospitals in the Montreal area. Originally created at Dr. Rosen’s country home, Little Hercules is now located at the Montreal Children’s Hospital, and it was designed so that it could be re-installed at the new super hospital location. To The Summit And Beyond was installed at Mount Sinai in Cote St-Luc. 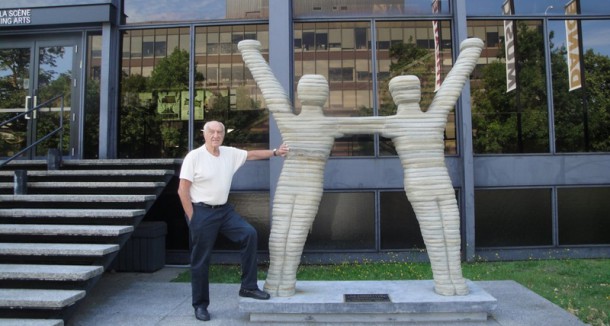 Dr. Harry Rosen the sculptor (still in his work clothes) following the November 2011 installation of The Connection at The Segal Centre for the Performing Arts. A twin version in bronze was installed at L’institut de Cardiologie in 2014

Dr. Rosen’s emotions rose when he described his installation of Maximus (Where There’s a Will, There’s a Way) at the Mackay Centre on Decarie. “I was an institutional person in my work, and I’ve had a good life. Here was this institution for children with serious handicaps, and I experienced a journey of love into the Mackay Centre. There’s a large parking lot and a small patch of grass with an immense boulder in it. I decided that we’d place Maximus on top of that rock that has existed for millions of years, surrounded by man-made asphalt and concrete. I scaled the size back a little to accommodate the site, but he’s there to inspire the children and their parents every time they pull into the school.”

Dr. Rosen has donated eight sculptures designed to motivate and inspire to Montreal-area institutions such as the YM-YWHA, The Segal Centre, the Westmount YMCA, and The Montreal Heart Institute (La Connexion). He recently donated a sculpture to a downtown Toronto YMCA at the corner of College and Dovercourt. “Our installations are usually low-key and done in the early morning. The Toronto installation was done a little later in the day, and we gathered quite a crowd. Passersby started to clap as we completed the installation, and it was quite moving for our crew.”

As his technique continued to evolve, Dr. Rosen began to create bronze sculptures. He first creates the sculpture with clay, from which a wax mold is formed and used to create the bronze statue. One advantage of bronze is its durability. The first bronze was donated to the Westmount YMCA to celebrate the Y’s 100th Anniversary. The most recent was the installation of Maximus at the Mackay Centre. While all are located in public spaces, the happy fact is that none of the eight sculptures has been vandalized. “I think that people have a respect for public art.”

Conversations are ongoing with other Montreal health care institutions; and the Toronto YMCA installation has elicited interest from other organizations. For more information about Dr. Rosen’s achievements at McGill, his creation of dental reconstruction procedures and his work as a sculptor, please visit: www.drharryrosen.ca