The producers of Belles Soeurs: The Musical brings to life the classic pop hits and harmonies of the 1950s

After a record-breaking fall*, the Segal Centre for Performing Arts continues its 2014-2015 Season with a new production of the Off-Broadway musical phenomenon Forever Plaid, presented by Copa de Oro Productions in co-production with the Segal Centre. Roger Peace directs this hallmark doo-wop musical playing in the Segal Theatre from February 1 – 22, 2015. Forever Plaid is presented as part of the Festival Montréal en Lumière.

Stuart Ross’ wildly successful Forever Plaid is a lighthearted musical homage to the golden age of close harmony groups, told through the deliciously goofy story of a 1950s all-male singing group, “The Plaids.” Killed in a car crash on their way to their first big concert, the quartet of high-school singers are miraculously revived to get one final chance at musical glory and perform the show that never was.

Follow Jinx, Smudge, Sparky and Frankie as they sing a medley of 1950s pop hits in perfect harmony and bob-shoo-bop their way to fame in this fantastically funny and emotionally endearing crowd favourite certain to please musical theatre lovers of all ages.

Forever Plaid brings the velvety, four-part barbershop quartet harmonies of the 1950s to life on stage with book, lyrics and original choreography by Canadian-born Stuart Ross and musical arrangements by James Raitt. This 1990 musical creation was inspired by such iconic vocal formations as The Four Aces, The Four Lads, The Hi-Lo’s and The Crew Cuts. 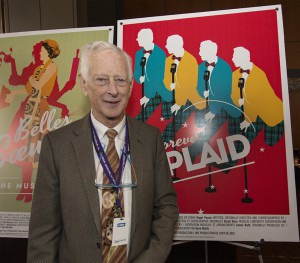 “There’s a good reason why Forever Plaid has captured the hearts of audiences for decades: Ross’s lovely and awkward characters, the charmingly outlandish choreography and of course, the brilliant harmonies. How can you not be delighted by such timeless hits as Love is a Many Splendored Thing, Three Coins in the Fountain and Moments to Remember?” says Peace, veteran theatre and musical director of over 100 productions including, Piaf: Love Conquers All, Ain’t Misbehavin’ and The Mahalia Jackson Musical.

“It’s a show that manages to be new and old at the same time. With that said, I am looking forward to recreating Plaid on the Segal stage with a few exciting new twists and a fantastic cast and creative team. It’s just the thing to help blow away those February Blues,” Peace adds.

A foursome of multitalented local actors including Chris Barillaro (Jinx/Musical Director), Gab Desmond (Frankie), Michael Daniel Murphy (Sparky) and Jonathan Patterson (Smudge), will step up to the mic and don those infamous plaid suits. They are accompanied by a live band led by Associate Musical Director David Terriault (Piano).

Projection by George Allister and animations by Eva Cvijanovic join Peter (Spike) Lyne’s lighting design to create a stylish and sleek mixed-media production design that transports the production to 2015.

Forever Plaid runs from February 1 – 22. Monday and Sunday night performances are at 7pm; Tuesday to Saturday shows are at 8pm. (No shows on Fridays.) Sunday matinees at 2pm, Wednesday Feb 11 and 18 matinees at 1pm. Tickets for are available at www.segalcentre.org or at The Segal box office: 514-739-7944. The Segal Centre for the performing Arts is located at 5170 chemin de la Côte-Ste-Catherine, Montreal.

Copa de Oro Productions: Pure Entertainment, if Only for an Evening

The creative team at Copa De Oro Productions boasts over 100 years of combined experience at all levels of the entertainment industry creating and producing shows in Montreal, Toronto,

New York, London and Paris. This experience results in delivering to theatre goers the very best. The company believes that time spent at the theatre should be an enjoyable escape

from the worries and stresses of our daily lives. Copa’s focus has always been to present musical productions and comedy plays to deliver enjoyment to audiences and take them away from those stresses, even if only for an evening. Recent collaborations between Copa de Oro and the Segal include The Mahalia Jackson Musical (2012), Ain’t Misbehavin’ (2013) and the breakthrough musical adaptation, Belles Soeurs: The Musical (2014). www.copadeoro.ca