Driving under the arch of the log gate and down a tree-lined road, I see the Fairmont Le Château Montebello for the first time. It was built in less than four months, with 3,500 labourers working around the clock, using 1,200 train car loads of timber and building materials, including 10,000 red cedar logs. This place is impressive by any standards, as is the long list of  presidents, prime ministers, foreign dignitaries, royalty, movie stars and international summits it has hosted. 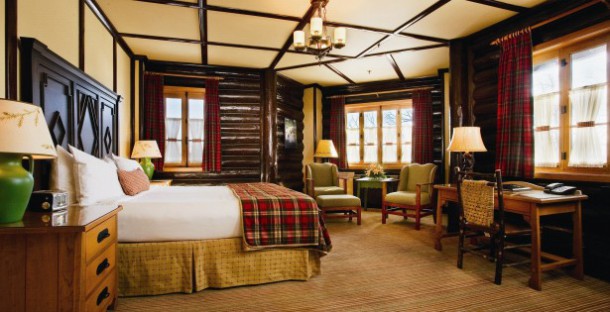 In the center of the lobby stands a soaring 6-sided fireplace. The 211 guestrooms are located on four wings fanning out from the lobby. Here, in the center of this log château, you will find Monte`s log cabin. Monte, a golden retriever originally trained to be a seeing-eye dog, is the hotel`s furry ambassador. Rarely using his cabin, Monte prefers to be greeting guests.

My room, like all the rooms at the resort, comes with one seldom seen added amenity – windows that open! Taking a breath of fresh air, feeling a gentle breeze and listening to the sounds of nature are a welcome throwback to the resort`s early days as a private retreat for the rich and powerful. Established as the private Seigniory Club on July 1, 1930, it took forty more years before it was opened to the public.

So Much to Do

Looking for something fun to do? The resort offers more than 40 activities to choose from: horseback riding, golf at the championship 18-hole course, bicycling, tennis, badminton and squash, or improve your off-road driving skills at Canada’s only Land Rover Experience Driving School. Wintertime activities include: cross-country skiing, curling, snow shoeing, tubing and dog sledding. 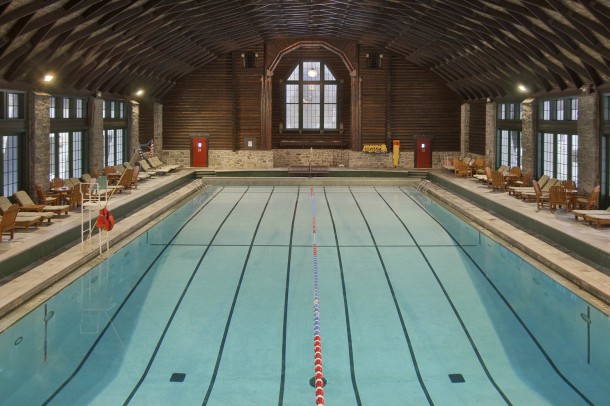 Opting for a dip in the pool, I stroll over to the largest indoor hotel pool in Canada. (An outdoor pool is open during the summer season.) Unbelievably, I have this 75 foot long pool all to myself. High above the water, ceiling beams create a diamond pattern framing seahorse motifs and skylights welcome the late afternoon sun. Floating lazily, I watch the water’s reflection dancing along the barrel-vaulted ceiling.

At the spa, the Salon La Source couples’ room includes a fireplace, soaking tub for two, rain shower and side by side treatment tables. The popular treatment is Montebello’s exclusive Green Blanket Body Wrap, featuring Maple Body Butter. Learning about this and the many other luxurious treatments available, I begin thinking up excuses to make a return trip to the resort.

From the delicious breakfast buffets to the gourmet dinners, Aux Chantignoles offers elegant dining under the direction of Executive Chef Jean-François Fortin. To share his love for fresh local produce, Chef Fortin and Château Montebello have created a special new package – the Chef’s Farm Experience. The package includes a visit to two regional farms and lunch at a local market accompanied by Chef Fortin.

Alongside the Château Montebello grounds is the 19th century home of Louis-Joseph Papineau – a grand manor built between1848-1850. Although Papineau is best known for his career in politics, his home reflects his family-oriented later years.

The garden is resplendent with yellow and purple irises in full bloom. Doting on his garden, Louis-Joseph would often write to his son in Montreal and request that he bring back specific flowers. Studying Papineau’s letters, researchers are working to recreate the garden as it would have been during his time. 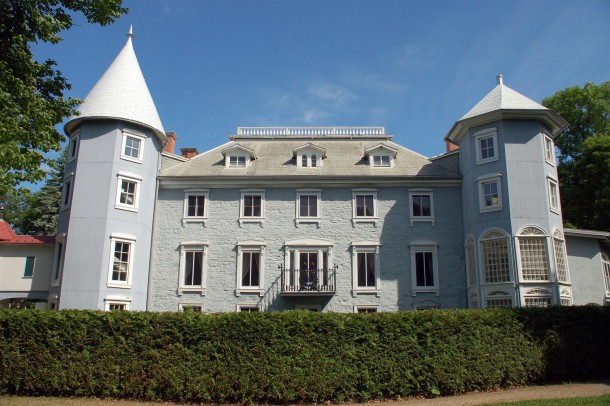 Run by Parks Canada, guided tours take visitors through the restored main floor of the manor, where 80% of the furniture is original. The wide main hallway, lined with portraits of the family, extends from the front door to the back of the house where windows look out over the Ottawa River. In the sitting room, to the right, family items like a cigar box, ivory fan and sherry glasses are on display. This room leads into the master bedroom, which features an elegant fireplace. Due to the difficultly of heating the manor and the isolation that accompanied winter, the family only spent one winter here – the first. Afterwards, they would leave in November only returning by steamboat when the river was clear of ice. At the time, this trip would take two to three days.

The manor will be hosting special tea events on select dates this August. “Wanted: Company for Tea!” will give guests the opportunity to enjoy tea in the manor while a period-costumed host relates anecdotes and traditions of the time. 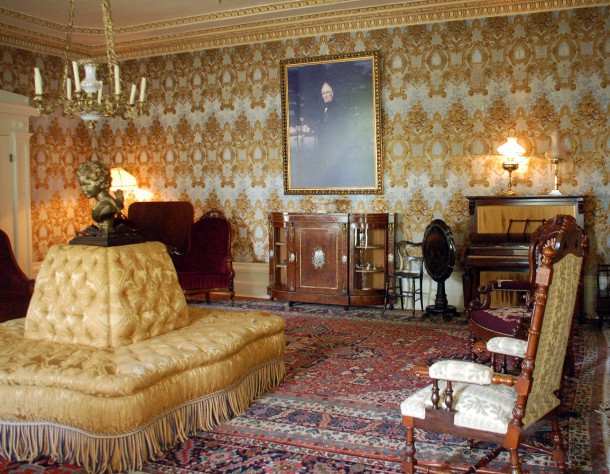 A Place for Passion

The town of Montebello, with a population of roughly 1,000, is a place where dreams are cultivated and those with a passion for their craft can flourish. Along the town’s main street, Rue Notre Dame (also known as highway 148), examples of these passionate artisans abound.

Upon entering Les Brasseurs de Montebello I am welcomed by the calming scent of freshly cut wood and bluesy rock tunes that soon have me taping my foot to the beat. Lampshades resemble old metal milk containers and blackboards along the side walls display the names of all the beers on tap. On the shiny metal wall behind the bar is a row of twenty taps: one cider, the rest Quebec beers. Only open since the first week of June, the microbrewery pub carries two of their own brews, with plans to introduce at least two more this year – all expressing a local connection and inspiration. La Reine du Mont Vinoy is a blond 4.5% that tempers any bitterness by adding local honey to the brew. Le Fantôme d’Ézilda, a bit stronger with 6.5% alcohol, derives its name from the local myth of Ezlida Papineau’s ghost – said to wander the family manor. Sylvain “Sass” Periard, public relations for the pub and vice president of the local beer tasting club, Les Biberons, explains that Les Brasseurs de Montebello was a long time dream of master brewer Alain “Riv” Larivière. “The time was now,” says Periard. Out on the large wooden terrace, amidst happy faces and foam topped glasses, I am inclined to agree. 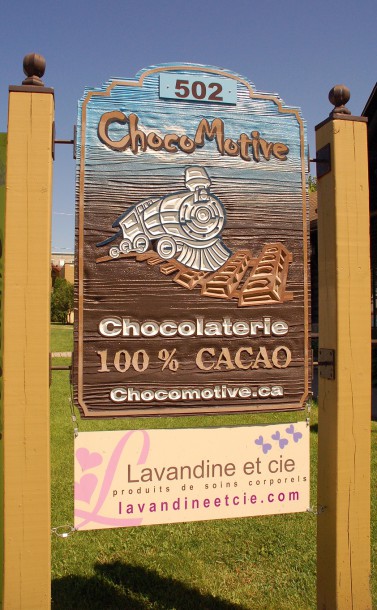 The old Montebello train station, made using the same red cedar log construction as the Château Montebello, houses the tourist information bureau and an artisanal chocolate shop. Four years ago, chocolatiers Luc Gielen and Gaëtan Tessier opened their shop here, calling it ChocoMotive as a nod to the locomotives that used to frequent the station. Using Organic Fair Trade ingredients, almost exclusively, and proudly refusing to use the soy lecithin emulsifiers that mass production chocolate companies typically use, creates a superior product. A part of the Économusée Network, the shop allows visitors a look at the chocolate making process. Delicious pralines and dozens of other chocolate treats line the shelves, but make sure to indulge in a cup of their luxuriously rich hot chocolate. Originally sold only in the winter, high demand has made it a year-round offering.

Further down rue Notre-Dame, La Fromagerie Montebello produces delectable artisan cheeses. In business for only two and a half years, Alain Boyer has already produced award-winning specialty cheeses. The Tête à Papineau, a semi-firm cow’s milk cheese, derives its name from the Quebec expression “Ca ne prend pas la tête à Papineau” – meaning the situation is obvious, one does not need to be that smart to understand. Rébellion 1837 is a creamy blue veined cheese that took Boyer a year and a half to perfect. My favourite is Manchebello, a firm sheep’s milk cheese that due to local supplies can only be produced from March to September each year. 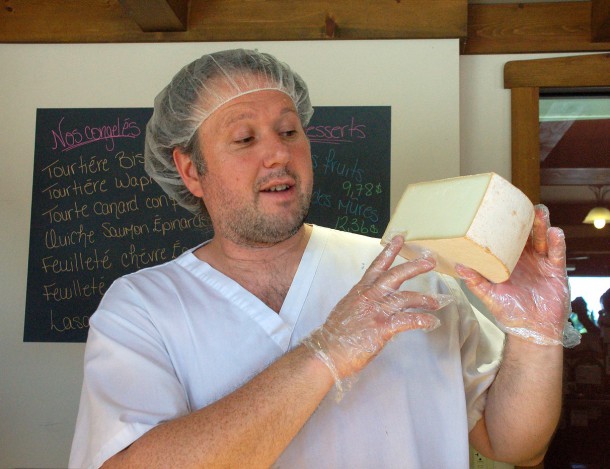 The newest way to explore the Montebello area is behind the wheel of an electric 4×4 ATV. Housed in the Papineau Manor`s old gardener`s house, Camp Explora combines an off-road expedition, local history and scavenger hunt riddles. Quiet and environmentally friendly, the two and four seat ATV`s are equipped with seat belts and have a top speed of 27km/hour. Supplied with helmets and an iPad, guests set out for a 90 minute adventure. 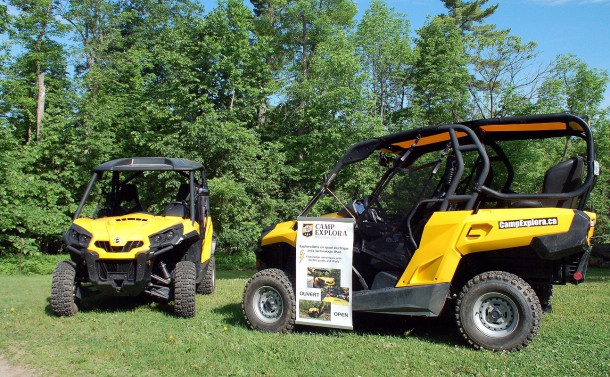 Following the step by step instructions on the iPad, we drive through bumpy forest trails, along quiet back roads of Mount Wescott, and beside the carpet-like greens of the Fairmont Le Château Montebello Golf Club, all the while learning the history of the old Seigniory Club. Camp Explora has been open for less than a year but its innovative adventure has already earned it Trip Advisor`s rank of #1 activity in the Outaouais region.

Raccoons, Bison and Bears, Oh My!

Coyotes, moose, fox, wolves, elk and more than 15 other species make up the 500-600 animals that reside at Parc Oméga. Walking trails and a 12km car path loop through the parks 2200 acres. To the delight of almost all visitors, the elk, whitetail and fallow deer eagerly approach cars in hopes of receiving carrots. 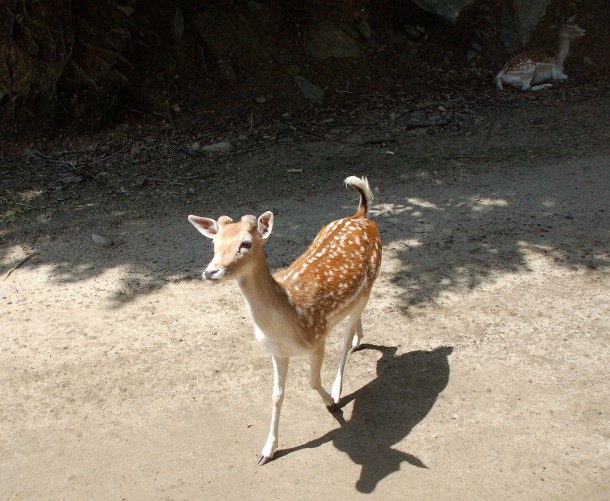 One of the many friendly Oméga Parc deer
Photo: Julie Kalan

The animals are the stars of the park and a new set of cabins allows guests the chance to spend the night among them. Only available from May to October these basic lodgings offer no heat, but come with amazing views of – bears and wolves, in their enclosures – and deer that are free to wander past your deck.

At the entry to the First Nations walking trail, just beyond a huge thunderbird carving, is a beautiful picnic spot where you can enjoy the shade of a teepee or longhouse shelter. On a wooden deck, overlooking the trout-filled lake, a fish food dispenser (25¢) supplies all you need to turn the still waters into a raucous feeding frenzy. Encircling the lake is the 1km First Nations Trail. Along the trail, ten white cedar totems, known here as talking trees, represent ten of the eleven Aboriginal Nations of Quebec. The Inuit are represented by an Inukshuk placed at a crossing along the park`s main road. The Talking Trees were all made by Métis-Algonquin carver Denis Charette. The first one, representing the Algonquin Nation, depicts a kingfisher on top (an animal that heralds the beginning of spring) and a bear on the bottom (a medicine animal).

A-Fishing We Will Go

Kenauk Nature, once a part of the old Seignory Club, is one of the largest and longest-established private fish and game reserves in North America: 65,000 acres of wilderness containing more than 60 lakes. More than a dozen private chalets are spread across the vast woodlands – each with a fully equipped kitchen and one to six bedrooms. With no TV, internet or telephone, the staff likes to say that the only call you will get is the call of the loon. Under star filled skies, the peace and quiet is so rejuvenating that, Kenauk spokesperson, Celyne Fortin says “spending two days at Kenauk is like a two week vacation somewhere else.” Activities at Kenauk Nature include fishing, hiking, canoeing, kayaking and clay shooting. Kenauk guests also have access to the sports facilities and indoor pool at the Fairmont Le Château Montebello; and guests of the Fairmont Le Château Montebello have access to Kenauk Nature. 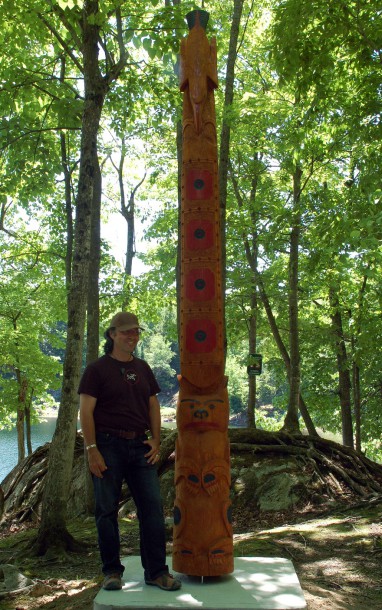 Montebello has the greatest variety of log buildings on the planet: In addition to the log hotel, indoor swimming pool, curling centre, marina, golf club, train station, and old fire station, there are several log homes, garages, and restaurants, as well. To promote and preserve these heritage buildings, Montebello has formed the Association of the Log Building Capital of the World. Future initiatives include a museum, international festival, exhibition centre and school. 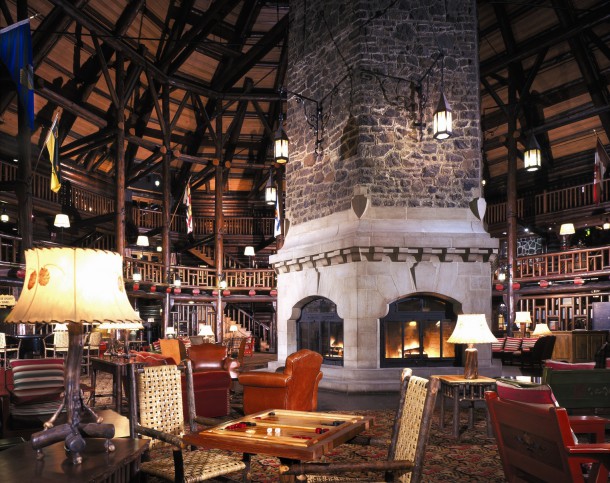 Château Montebello, located on the north side of the Ottawa River, is about 140km from Montreal.