The St-Ambroise Fringe Festival takes place in the Plateau-Mont-Royal area from June 5 – 22, and in the spirit of the original Scottish Fringe Festival, the performances are zany, unique, creative and so popular with their audiences that it feels like a movement. The recent press conference at the Katacombes on St-Lawrence was a wild and woolly event, and that was just to announce the Festival! 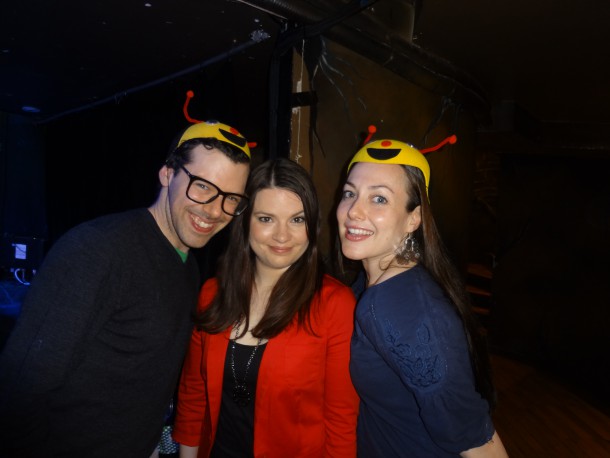 Firstly, the selection process for performers is by lottery, applicants’ names drawn at random. There are few ‘rules’. Or conversely, they take their looniness seriously and have rules to protect the lawlessness of the festival. There is no art direction, no censorship, and artists have complete freedom to do anything. Fully 100% of the ticket price goes to the artist. In continuing with the theme of artistic democracy, 35% of performers are Quebec Anglophones, 35% Quebec Francophones, 15% Canada-wide and 15% International.
The Fringe hosts 110 companies who perform 700 shows at 16 Fringe and Fringe Off venues throughout The Plateau area. The antics continue during Fringe After Dark, a variety of events in the spirit of Fringe. Where else would you have a Fringe Fake Prom, So You Think That Was Dance? and the 13th Hour at Cabaret du Mile End where artists, staff, volunteers and media gather for a late night talk show. There was enthusiastic applause when this event was announced. (Like I said – it was a happy press conference…)
It’s a terrific opportunity for would-be artists to have what is possibly their first performance. And at times it is a great success. Past performers have included now-famous playwright Steve Galluccio (Mambo Italiano), Stephen Colbert and Rick Miller, Peter Hinton (theatre director) and Johanna Nutter (actor). It can be an opportunity to catch talented newcomers on their way up. Fringe Alumni also include Holly Gauthier-Frankel and Simon Boulerice who are event spokespeople for the Festival.
“This is where we come to learn about performing in front of an audience, where we come to be bold, to be free and to learn how to be an artist,” stated Holly Gauthier-Frankel at the launch party.

Centaur Theatre provides an award for Best New Play and the winner is guaranteed a performance at the theatre’s popular Wildside Festival in early January.
Fringe Park is located at the corner of Rachel and St-Laurent, and it is the hub of Fringe activity. “What are the beer tent hours?” called out one ‘journalist’. All Fringe Park events are free, (beer is not an event and therefore is not free) including Mini Fringe for the whole family.
Moving back indoors, the Strip Spelling Bee is for Adults Only and is exactly what you’d expect. Instead of Strip Poker, it’s a spelling bee and 10 contestants compete in front of a live audience at MainLine Theatre on Wednesday, June 4 at 9pm. All this for just $10!
Ticket prices do not exceed $10, and most shows are one hour. An additional $2 covers the taxes. You can see a lot of theatre, and ticket packages are economical. A Ménage-a-Trois Pass is for 3 shows (who could guess!) at $28. A Gold pass for 6 shows is $55 and a Platinum pass for 10 shows is $85.
For more information (and there is a lot of it!), www.montrealfringe.ca or call 514-849-FEST