The tentacles of War spread out through countries and into the small neighourhoods, grasping the hearts, souls and daily lives of the people. Verdun was no exception. David Fennario’s, Motherhouse, looks back at the influence War had on the small community there, how the people pulled together and dealt with the unexpected horrors handed them. The stress of war bonded whole communities together with a single purpose in mind. Survival. Most affected were the women, left behind to take over the jobs left by the men – men, many of whom they would never see again.

As someone who spent part of her childhood in Verdun, I was looking forward to seeing Fennario’s latest play at Centaur Theatre. 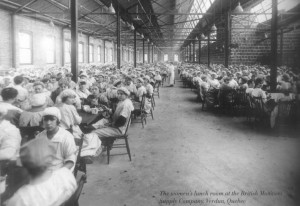 Walking into the theatre takes you right back in time – “It’s a Long Way to Tipperary” was the first tune I heard. About ten minutes before the play starts, when the audience is still filing in and looking for their seats, the cast members come out on stage and interact with the audience. In fact, the fourth wall is broken many times during the show.

This is not a production with a beginning, middle and end, per say. It is a moment in time. It is a long monologue, filled in with the enriching sounds of beating pots and pans and a melodic fiddle that served to round out this production. Some of the most poignant moments are when Bernadette Fortin plays that fiddle.

Holly Gauthier-Frankel plays Lillabit/The Narrator. As such, she carries the bulk of the show on her shoulders. She is relaxed, warm and personable and knows how to tell a good story. Fennario’s story is somewhat convoluted and, at times, difficult to follow. It’s a very long monologue for one person to carry, but Gauthier-Frankel has acquitted herself well, in both endurance and memory work. The audience clearly enjoyed her.

Jeremy Taylor’s direction for the story-teller is static in movement and requires change of focus in placement and positioning to bring the persona of this character to life. 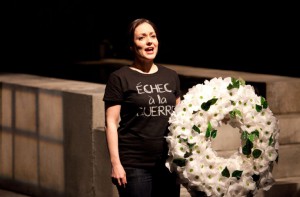 Delphine Bienvenu, Bernadette Fortin and Stephanie McKenna support the actions, comic and serious, with various sounds and music that comment on the story as it runs along. Dressed in dark greys and blacks, they add to the gritty, depressing environment of the place and time.

Lighting by Peter Spike Lyne, was also extremely supportive of the action and of Laurence Mongeau’s set design – the latter employing a most useable tower that is put to work efficiently. The staging of the slaughter of so many of our enlisted men, using little manikins on a production line heading into the fray, only to be thrown away and forgotten is wonderfully creative and….a stunner!

Videos of men marching off to war and pictures of women left behind are projected on a backdrop. A shot taken in the British Munitions Factory in Verdun is quite powerful – a mass of women sitting at tables. One of these women struck Fennario as defiant. She became his Lillabit.

If you grew up in Verdun, the show is a must see. It touches deeply on the lower class families that were left to cope. This play is more of a pronouncement than an interchange of thoughts and ideas and thus plays on one level. It is lacking in emotional depth.

It is not a play with a beginning, middle and end, because War continues. We are still locked in the human endeavor of war. The affects of war have no end. We Will Remember.

Motherhouse is on at the Centaur until March 23.
To purchase tickets please call the Centaur Box Office: 514-288-3161 or online www.centaurtheatre.com