Cher has also been awarded an Oscar, an Emmy and 3 Golden Globes

Cher has won the top awards as a recording artist and actress. There is no greater recognition for an entertainer than to win an Oscar, a GRAMMY and a Golden Globe for their work. Cher has won in each of the three categories, in addition to selling more than 300 million albums. It’s a long way from playing the straight ‘man’ to Sonny Bono’s comedic onstage persona. Cher is a tour de force, and her 2013 album Closer to the Truth debuted on the Billboard Top 200 at #3, making it her highest selling album in her 48 year recording career.

Her first Farewell Tour began in June 2002 and originally included 49 shows. It ended it June 2005 after 325 shows (plus a concert televised on NBC that drew an audience of 17 million viewers); and it was the highest grossing tour by a female artist. Forbes Magazine estimates Cher’s net worth at $305 million. In 2008, Cher began a three-year stint in Las Vegas where she contracted to perform 200 shows at Caesar’s Palace for a reported $60 million. Her Dressed to Kill Tour begins March 22 in Phoenix, and comes to Montreal on April 25.

Cherilyn Sarkisian was born is 1946 in southern California during the first of her mother’s eight marriages. Her father was a long distance truck driver; and his long absences were aggravated by his drug and gambling problems. Oddly, Cher’s mother would re-marry John Sarkisian twice more.

Her mother changed her name to Georgia Holt and obtained small acting parts in movies and television, including the Ozzie & Harriet Show. Holt’s various marriages took her and her two daughters to New York, Texas and back to California. Lack of money was a constant condition, and in desperation, Holt placed Cher in an orphanage, unable to provide her child’s basic needs.

Like many successful people, Cher’s humble beginnings shaped her will to be self-sufficient and to break free of the bonds of poverty. In conversation with biographer Connie Berman Cher stated,

“I couldn’t think of anything that I could do… I didn’t think I’d be a singer of dancer. I just thought that I’d be famous – that was my goal.”

School was a more a place that Cher went to rather than a place where she went to learn. “I was never really in school. I was always thinking about when O was grown up and famous.” Cher dropped out of school at 16 and moved to Los Angeles, where she danced in clubs to support herself. She introduced herself to anyone she felt could help her career. In 1962 she met Sonny Bono, and her life began to have a direction. Sonny was well-connected in the music business, and in addition to developing a singing duo with Cher, he also introduced her to record producer Phil Spector; who hired Cher to sing background on several of his ‘wall-of-sound’ recordings. Cher sang back-up for many recording artists; including for The Ronettes on Be My Baby and You’ve Lost That Lovin’ Feelin’ for The Righteous Brothers. 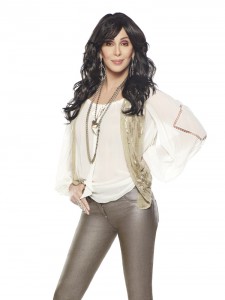 What started as a friendship with Sonny evolved into romance and then the couple married in October 1964? The couple recorded a few songs that didn’t make an impact. However, they were gaining experience, and in 1965 Sonny & Cher recorded I Got You Babe, and song that not only went to become a #1 Billboard hit, it knocked The Beatles out of first place. At one time in the mid 1960s, Sonny and Cher has 5 songs in the Top 20. Only Elvis and The Beatles had accomplished that.

As rock music became heavier in the late 60s, the vocal harmonies of a duo like Sonny & Cher became passé, and their recordings stopped becoming hits. They performed in night clubs and began to develop the routine of Cher affectionately mocking Sonny. They guest-hosted The Merv Griffin Show, were ‘noticed’ by CBS executives and tested The Sonny & Cher Comedy Hour before going on to a three-year successful ratings run. Cher developed her acting skills playing different roles in the weekly comedy sketches.

Cher’s recording career began to outpace the couple’s records. The couple’s marriage ended in 1972, although they continued the show until 1974. Her marriage to rocker Greg Allman lasted all of nine days, after she recognized that her new husband had a serious drug addiction.

Cher’s musical career had during the 70s and in the early 80s she decided to pursue an acting career. She moved to New York to begin lessons at The Actor’s Studio, but landed a part in a Broadway play being directed by the legendary Robert Altman. She later earned a Golden Globe nomination for her role in the film adaptation.

She then won was nominated for an Oscar and did win a Golden Globe for best supporting actress for her role in Silkwood. Several more films followed, and in 1987 Cher won an Oscar for Best Actress and a Golden Globe for her performance in Moonstruck. She was now earning $1 million per film. She parlayed her stardom into product endorsements. Her fragrance Uninhibited grossed $15 million in the first year. 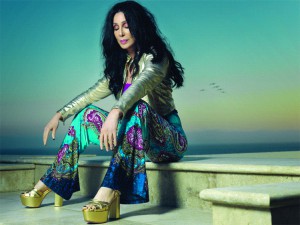 Her recording career was revitalized and in 1989 she sold 11 million copies of her album Heart of Stone, which include her hit song If I Could Turn Back The Hands of Time.

The frenetic pace took a toll on Cher’s health, and in 1992 she developed chronic fatigue syndrome after contacting the Epstein-Barr virus. Unable to sustain her music and film careers, Cher recorded infomercials. She earned $10 million – but also earned the scorn of her detractors.

She recovered and resumed acting, recording and touring. In 1998 Cher recorded a studio album titled Believe, which was certified gold or platinum in 39 countries, selling 11 million copies. The Do You Believe Tour started in 1999 and continues into 2000; selling out in every American city.

She followed up with Living Proof in 2001, which debuted at #9 on the Billboard Top 200 chart, her highest rank to date in the record industry’s publication of record. But! There’s more…the then 55-year old singer would best her Billboard ranking with her release of Closer to The Truth in 2013. At 67 years of age by the album’s release, Cher’s latest recording debuted at #3 on the Billboard Top 200 chart. These charts are made up of a combination sales figures and radio play.

The young girl who had a vague notion that she wanted to be famous has become immensely successful and wealthy. Along the way she has also become a role model for women to be self-sufficient and assertive. Despite her financial success, Cher had to assert herself with Sonny, stand up to record company executives, film director and insist that she be allowed to be herself. In the end, it was a decision that served everyone’s interests. Cher has made a lot of money (her personal wealth is estimated by some sources at $600 million) for herself and everyone associated with her. It’s the audiences who are touched by her music and acting because if comes from her heart.