Sitting on the banks of the Aure River, in the heart of Normandy, Bayeux is a quiet treasure of cobblestone streets, half-timbered houses and quaint shops. A relaxing stroll down picturesque lanes quickly brings me to the former seminary that now houses the Bayeux Tapestry Museum.

A quick downpour has me running across the large courtyard and into the museum. A bit soggy, but no worse for wear, I pick-up an audio guide (available in 14 languages) and enter a long dark hall. Like in a darkened movie theatre the setting draws your full attention to the scenes along the left side wall. 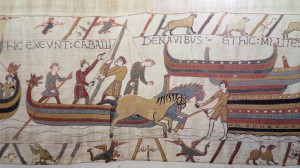 The Bayeux Tapestry is actually not a tapestry at all. It is woolen yarn embroidered on linen cloth. The almost 70m long and 50cm high piece resembles an old film strip. The main story takes places in the large center section, while along the outer edges or friezes – where the sprocket holes are located on film strips – there are small embellishment scenes. These decorations range from mythical animals and agricultural scenes to displaying the ravages of medieval battle.

The story itself has all the elements of a great movie: The old King of England, Edward the Confessor, dies without an heir; his brother-in-law Harold assumes the crown, but in doing so betrays his sacred oath; upon hearing the news, the Duke of Normandy, a distant relative of the old king, prepares to claim the crown for himself. The film could be called “Becoming the Conqueror” since history would dub that duke William the Conqueror. 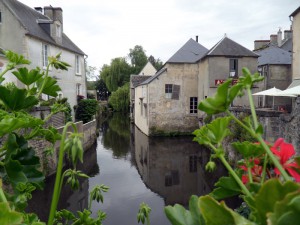 Scenes of Norman’s felling trees and building boats, carrying weapons, chain mail armour and supplies onto ships are followed by the English Channel crossing. After each scene, I slowly shuffle to the right and watch the story develop.
In true cinematic style the 11th century tapestry shows us the “calm before the storm” as the Norman troops prepare their last meal before facing the English troops in the Battle of Hastings. Cavalry, archers and foot soldiers wielding swords and axes leave numerous causalities on both sides. Since we all know how this “film” ends there is no need for a spoiler alert before saying the tapestry shows Harold’s death on the battlefield.

Drawing 400 000 visitors each year, this delicate linen masterpiece has miraculously survived through nine centuries of church fires, wars, and revolutions. Beyond the tapestry there is an exhibition floor and short documentary explaining the tapestry’s historical context and special stitching.

Entering a small shop, just down the road from the cathedral, I meet a Bayeux Tapestry aficionado and skilled embroiderer. Chantal James, owner of Bayeux Broderie, teaches the art of the Bayeux Stitch and sells embroidery kits. Some kits feature flowers or shells, but the ones that recreate sections of the Bayeux Tapestry are by far the most enticing. Wanting to try it for myself, I purchased the smallest kit: the prow of a ship from the channel crossing scene.

Commissioned for a Cathedral

As strange as it may seem to us today, the battle-filled tapestry was most likely commissioned, by Bishop Odo, to hang in the sanctity of the Bayeux Cathedral nave. When Odo consecrated the cathedral on July 14, 1077 his half-brother William, King of England and Duke of Normandy, was in attendance.
The large cathedral appears even more imposing alongside the tiny, unassuming town. Most of the cathedral, added in subsequent centuries, is gothic in style. However, there are a few interesting features left over from Odo’s original Romanesque structure. The two styles blend surprisingly well, but it is the older sections that hold my attention. Entering the modest crypt I am awed by the centuries-old site of devotion. The subterranean atmosphere is hushed and still. Short cream-coloured pillars are capped with angels painted onto orange backgrounds. In some places the vaulted ceiling is covered in an ethereal blue and speckled with stars.

More than a Place to Lay Your Head

I have always thought that hotels were simply a place to rest after a day of sightseeing and adventure. However, here in Bayeux I discovered a hotel that has impressed me so much, it has actually become a trip highlight. Villa Lara, located just off the main pedestrian street is elegance personified. Stepping into my room, the first thing I notice is a regal plum coloured carpet. After removing my shoes, my weary feet follow the plush path to a large, beautiful bedroom. Furnished with two single beds, a good-sized desk, 2 armchairs and a chandelier, the room is meticulously designed.

Against the neutral coloured walls, vertical lines and dots on the curtains and armchairs, respectively, borrow the plum colour of the carpet and the crimson of the bedspreads. The style is clean and classy, no frills and none of the industrial looking style that seems to be growing more prevalent by the minute. A large darkened mirror in a gold tone frame turns out to be the TV and the two windows overlooking a small grassy square open to views of the cathedral’s steeple. The marble bathroom with shower and separate soaking tub complete the package. After talking with guests in the lobby, cozy lounge and breakfast room I have found out that my elegant oasis, though individually decorated is stylistically matched throughout their 28 rooms.

In Bayeux, as in all parts of Normandy, a proper meal includes two very important locally sourced ingredients: dairy and apples. The growing consensus in my traveling group is that the cows in Normandy must be the hardest working cows in the world – for beyond the endless trays of Camembert, Pont l’Evêque, Livarot and heart-shaped Neufchâtel; locals generously add crème fraîche to just about everything. (Although crème fraîche translates to fresh cream, the term actually refers to an unpasteurized heavy cream that is not as thick or sour as the sour cream we find at home.)

From the tranquil orchards of Normandy, apples make their way into appetizers, entrees, desserts, and perhaps most famously into your glass. Calvados is an apple brandy that is aged in oak casks for a minimum of two years. Between courses of a long meal or during special dinners, locals down this fiery libation to cleanse the palate and make way for the next course – this tradition is referred to as “le trou Normand” (or the Norman hole).

Bayeux is located 2.5 hours from Paris.
On June 7, 1944, Bayeux was the first French town liberated by the allied forces. This medieval town that escaped the war intact makes a wonderful base for D-Day tours. 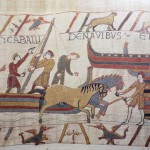 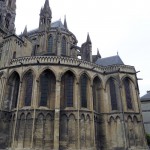 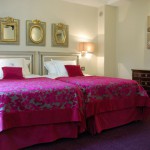 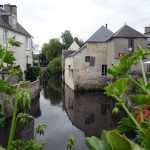