A Canadian premiere of the internationally acclaimed The Giacomo Variations

After shining in Dangerous Liaisons, Burn After Reading, Being John Malkovich and The Infernal Comedy, Malkovich will bring back the legendary seducer and adventurer to life in The Giacomo Variations. “I need Variation, even in love; even in making love” he says, as if to explain his extraordinary romantic relationships, as unrestrained as it was lively.

It is precisely through his memoirs that we are witnessing the real if temporary transformation of a Casanova on the brink of his demise. He is rejuvenated under our eyes, finds back his strength, his verve, as if his writing was reinforcing his “love” of love and his passion for life. The play has everything: emotion, laughter and smiles, pirouettes and provocations. 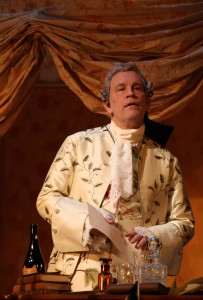 The show is an interesting and entertaining liaison between theater and music. John Malkovich plays alongside gifted actress Ingeborga Dapkunaite and renowned singers Florian Boesch, baritone, and soprano Sophie Klußmann whom, accompanied by the 35 musicians of the Vienna Academy Orchestra, will interpret the most beautiful arias of Mozart’s masterpieces, Don Giovanni, Cosí Fan Tutte and The Marriage of Figaro.

Michael Sturminger and Martin Haselböck bring their talents as screenwriter and musical director to revive the Venetian adventurer, spy, diplomat and jail breaker.

The June 4 and 5 performances in Montreal mark the Canadian debut of this show that combines theatre, opera and the Vienna Academy Orchestra in a riotous romp through a series of bedroom scenes. This is a unique show that has opened to enthusiastic response elsewhere. French supertitles will accompany the performance. Enjoy!