One of the main reasons I`ve often been to Turkey is my fondness for finely knotted, high quality, intricate design carpets. For several centuries preceding 1979, the world`s best carpets came from Iran, Afghanistan, Turkmenistan and Turkey.

A really fine quality carpet has 700 knots per square inch. For a 6’ x 9’, that`s over five million knots! They`re not cheap but they`re unique and they last a very long time. In the 1920s my maternal grandfather bought some moderate quality (about 250 knots per square inch) Turkish carpets in Istanbul. The family has walked on them for almost a century. They`re still in pretty good condition! Oriental carpets are expensive to buy but their longevity makes it a very worthwhile purchase.

Knotting a very fine medium size carpet can require the work of four weavers plus one designer over a period of several years. That requires a major, long term, investment. When Khomeini ousted the Shah of Iran and instituted a theocratic dictatorship most of the Iranian investors fled .The Russian occupation of Afghanistan, followed by a civil war, then the Taliban and finally the American intervention had the same effect. Result: hardly any fine quality carpets are being produced in Iran and Afghanistan. Turkmenistan still produces a few but they`ve got lots of oil and gas. Few of their people have the patience for carpet knotting. That leaves Turkey with few competitors!

Urgup, in Cappadocia, is famous for the extensive underground cities dug many centuries ago by groups afraid of persecution or banditry. It`s also famed for the “fairy chimneys” which are hard rock columns left after the surrounding softer rock eroded away. I like it because some very fine carpets are knotted in the area. We stayed at Elkep Evi, a small hotel modelled after those underground cities and whose rooms were cut out of the rock in a cliff. Ours had a Jacuzzi! Euros 100 per night, including a delicious breakfast: melons, grapes, peaches, yoghurt, eggs, fresh bread, olives, cheese, their own honey and thick authentic Turkish coffee. There’s a bazaar with many carpet shops.

A modern air –conditioned minibus took our group of five adults wherever we wanted to go in Cappadocia. Including vehicle, driver, fuel and parking fees it cost $150. per day. Mehmet Nuri Ozden of ARGEUS Tourism and TRAVEL supplied the vehicle and is a cooperative and reliable tour operator. After four days we flew from Urgup to Istanbul

It’s partly in Asia and partly in Europe – both geographically and atmospherically. We stayed in a well renovated centuries old hotel: the “Seven Hills”. We chose that hotel because of its very convenient location in an area called “Sultanahmet”, from which we could walk easily to the most famous mosques as well as the Kapali Carsi, that enormous, always fascinating bazaar, with an entire section of carpet vendors. To eat we sometimes travelled from one continent to another! The Bosphorus is the strait dividing Europe from Asia. In the evening we would take a taxi from Sultanahmet either to the Flower Passage restaurants in Beyoglu (Europe) or take a ferryboat to the fish restaurants in Uskudar (Asia). The Flower Passage is a long pedestrian walkway lined with restaurants –some Turkish, some European, some Asian but mostly tasty and not expensive. The fish restaurants display what’s available. You choose, they weigh and then they cook it according to your tastes.
We’re looking forward to returning there soon. 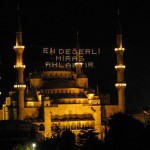 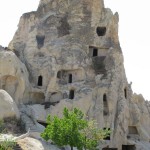 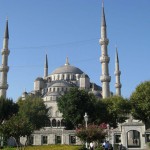 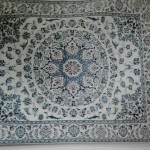