About one minute into the play, the laughter starts.  Two Irishmen, traipsing across the ‘auld sod’ in search of a descendent, ending up in a graveyard with a doddering old woman and finally at the local Priest’s, is a bit of a giggler in itself. Imagine if one of the men is around 130 and the other 100 and the descendent they are looking for is 70 years old – the result of a ‘quickie’, by the 100 year old, with a local girl named Mary. Off they go on this absurd walk in search of the ‘youth’. Thomas, the 100 year old, has only one arm and his ‘Da’ has a wooden leg. They both have rather long, large ears.

Absurd it is, and surreal. It’s dark. It’s hysterical. It’s traditional. It’s Trad.  On at The Centaur Theatre until March 24, TRAD (originally created for radio) was written by Irish playwright, Mark Doherty and is directed by Andrew Shaver.

What makes this play so good is that the comedy comes from honest and real situations: the desperate need for continuance. All the roles are played with such profound truth – so much so, that when they do a serious scene at the end of the play, you are almost drawn to tears. Doherty also has experience as an actor and stand-up comedian, which is why this piece of work is so creative. The magic of Trad is in the writing. The actors have no problem latching on to that magic.

Patrick Costello (Da) and Graham Cuthbertson (Thomas), the two leads, are outstanding in their roles. Costello, as the elder, is at once crotchety and overwhelmingly sweet, conniving and sharp, with such believability that the transformation to his real age in the curtain call almost comes as a shock. There is no time during the play that you would ever think he was ‘acting’ as an old man – His every move, every facial twist, his left hand, that sometimes shapes itself into a claw, are all so natural. This actor has tremendous control of his body and voice. 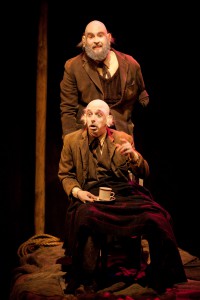 Throughout the hilarity, truth screams through the words written by Doherty.  Da is strong on tradition. About being Irish: “You don’t become Irish by hangin’ around in Ireland. It’s in the genes. Visitors who come here are welcome to our postcards, not our land. They’re tourists plain and simple”.

Cuthbertson, as the large, great cumbersome son, also works the lines into a part of himself that charms the soul out of the audience to believe in the profound and sometimes awful simplicity of the ‘boy’ so tied to the apron strings of the old traditionalist.

Trad is full of traditional music, traditional comedy, and traditional storytelling. Have you figured out this is where the title comes from? Trad? If there’s one thing in which the Irish excel, it’s the art of storytelling. They can spin a yarn for a tourist asking for simple traffic directions – so much so that, by the time the Irishman’s finished talking, said tourist won’t remember the question he originally asked. There is plenty of yarn-spinning in Trad.

Enter Andrew Shaver as Father Rice. I see a strong influence of Father Ted in this role. That ought to get everyone’s attention. (For those unaware, Father Ted was a television series featuring Dermot Morgan as a raunchy Irish priest who was banished to Craggy Island – very upsetting to some viewers and outrageously funny to others. I am of the latter.)
Shaver definitely deploys a lot of ‘raunch’ in the role. With scraggly hair, looking like death warmed over, he spins the yarns deftly, and plays the audience like a fine fiddle. Shaver also plays Sal – a woman – who comes upon the two travellers in the graveyard. Her entrance is a sight to behold; a scrunched up, bow legged, pathetic old bag. She may be an old bag, but she understands the goings on of the world – her take on kids’ dependence on the technical facets of our present day is right on and comes as a bit of a surprise.

This isn’t the first time Shaver has performed in the play; but it is the first time he has directed it. He has “rediscovered the music of the writing and comedy, with focus on the rhythms of the text and language”. That’s what is great about doing a show more than once – all those new discoveries. “Also good are the things remembered that worked really well. We took all the good things remembered from the original show and recreated them”.

Knowing the lines so well that they are second nature to you doesn’t hurt either. You don’t have to worry about them and can get on with being the character…and having fun.  Fun is what these actors have every single minute.

The set is extraordinarily well thought out and creatively used. Every little inch. To the audience’s eye, there is simply a large mound on stage, along with some straw, a chair and a couple of objects to sit on…each and every one of those objects are put to imaginative use by the actors.

Shaver refers to the play as “grotesquely comic, a cross between Monty Python and Beckett”. It is grotesquely comic but is also a testament to the passion, inner strength and spirit of the Irish.

You will leave the theatre somewhat sore from laughter and with very warm hearts after this wonderful sharing in the relationship between father and son. Because Trad is, above all else – a love story.

I suggest you get your tickets now. Montreal’s Irish community is itchin’ to get to this one and you know how many of us there are.

Trad continues at The Centaur until March 24. For more information: www.centaurtheatre.com Box Office:  514-288-3161