Oscar Peterson began his professional career as the pianist in a band performing for Saturday Night dances in Westmount’s Victoria Hall. It was a fitting location for a February 27 live performance and recording to commemorate the 50th anniversary of Oscar’s most successful album, Night Train. Bassist Dave Young, who accompanied Oscar for 35 years, was joined by another band alumnus, drummer Alvin Queen. Leading the trio was award-winning pianist Robi Botos, a former student and close friend of Oscar’s. 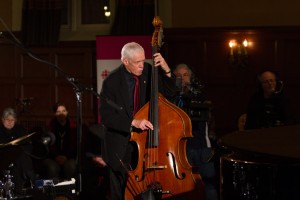 When Oscar Peterson, Ray Brown, Ed Thigpen and producer Norman Granz walked through the front doors of Radio Recorders in Los Angeles in December 1962 they probably had no idea that they were about to record Oscar Peterson’s defining work.

It was another session in a long line of sessions. Record during the day and gig at night. That was the life of a jazz musician in the 1960’s. The plan was simple. Go in to the studio and bang out a set of some of Oscar’s favourite tunes.

By the time they got a take of Duke Ellington’s “Happy-Go-Lucky-Local” or as it is also known, “Night Train”, they perhaps began to realize that they were on to something special. Over the course of two days The Oscar Peterson Trio recorded 15 songs, 11 of which would end up on the final release.

Of the 11 songs on the final record 10 were what we would call today “Covers”. Back then they were just known as tunes. The 11th song was one of Oscar’s own compositions, “Hymn To Freedom”. Written at the session and recorded as an afterthought. “Hymn To Freedom” would become one of Oscar’s defining works and would become the anthem of the Civil Rights Movement of the 1960’s.

When the record was released in March 1963 it was obvious to everyone that heard it that a Jazz masterpiece had been recorded. Its tight arrangements and radio friendly song lengths were a sure fire hit. The album would soon go on to be the best selling of Oscar’s career.

Drums: Alvin Queen. Alvin began his drumming career early. By the age of 12 Alvin had cut his first record with a band that included Zoot Sims and Hank Jones. From there Alvin went on to be one of the most in demand drummers in the world. The list of musicians he has performed with is too long to list but one of his favourites was, of course, Oscar Peterson. Alvin has the distinction of being the person who travelled the farthest to take part in the show – from Geneva, Switzerland. 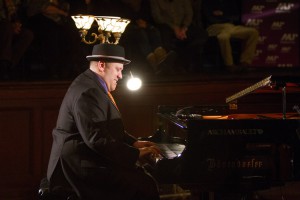 Bass: Dave Young. Dave is no stranger to Canadian music fans. He has performed with every musician of note that Canada has ever produced and you are just as likely to see him on stage with a Symphony Orchestra as you are to see him at The Rex Hotel in Toronto. Dave has the distinction of being Oscar Peterson’s longest collaborator, sharing stages with Oscar for 35 years.

Piano: Robi Botos, one of the most exciting pianists to come along since Oscar Peterson himself. He was born in Hungary and spent his formative years there honing his skills. When he landed in Canada it didn’t take long for Robi to get noticed and before long Oscar took him under his wing. Oscar even asked Robi to teach piano to his daughter. An unenviable task for sure. Since those early days in Canada Robi has gone on to great success, winning several awards, recording several albums and also as a side man. 2012 was a big year for Robi; he was nominated for a Juno for his recording “Aspects of Oscar” and won the Grand Jazz Award at the International Montreal Jazz Festival. 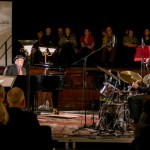 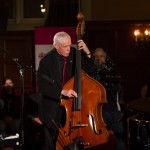 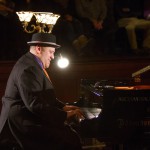