After a tumultuous period, Chris Nilan now has a growing media career, campaigns tirelessly against bullying and has a line of “Knuckles” branded products

Chris Nilan won the hearts of Montreal hockey fans during his nine years with the storied Montreal Canadiens. The latter years of his career took him to the New York Rangers and then Boston Bruins. A trade late in his career ensured that Chris could retire as a Hab, the team that had captured his heart from the first moment he pulled on a Montreal Canadiens game sweater. Now, after a retirement that has been fraught with challenges, Chris has returned to Montreal with his girlfriend Jaime Holtz. After battling alcohol and drug addiction (the latter from a progression of pain medications to combat arthritis after thirty surgeries), Chris is well into his comeback journey. His found the courage to admit that he needed help, and then he tapped an even deeper well of personal strength to rebuild his life – one day at a time. 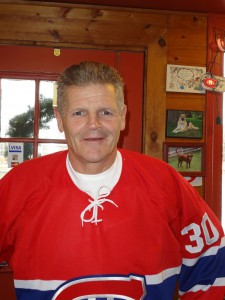 Chris grew up in West Roxbury, a predominantly Irish working-class district of Boston, where hockey was a major part of the social fabric during the winter months. “We played against the other Boston teams, and the whole town would turn out for the games.” Chris continued playing with the Northeastern University Huskies, and then in the American Hockey League, where he scored 15 goals and 10 assists; amassing 25 points in 49 games with the Halifax Voyageurs. “I guess you could say that I played a prototypical aggressive game. One of the reasons I was able to score is that I created space for myself in front of the net.”

Drafted by the Montreal Canadiens in 1978, Chris came into the NHL a year later as a tough guy and “a pretty good skater”. “Part of my role was to protect my teammates, but I could also score goals. I wanted to be a better hockey player and I worked hard at it. Jacques Lemaire and the late Claude Ruel really helped me. Claude had me practicing my wrist shot just in front of the goal, flicking the puck up and over where the goalie would be. I’d do that with 50 pucks, over and over. To this day I can still do that!”

The 1986 Stanley Cup victory with the Canadiens remains the highlight of his NHL career, and Chris was an overwhelming favourite with Montreal fans. And despite his still legendary fights and collection of penalty minutes; Chris scored goals and earned assists. Another personal hockey highlight saw him score on a penalty shot. “Nobody expected me to score – especially the goalie who sure wasn’t expecting that I’d fake him out!” Still, Chris’s ability to take on all comers in order to protect his team mates earned him the nickname “Knuckles”; a moniker that is now central to the branding of Chris’s website: knucklesnilan.com.

After playing with The Canadiens for 9 years, he was devastated when he was traded to the New York Rangers. “That trade broke me” he states emphatically. He played for three years with the Rangers before being traded to Boston; and then back his beloved Canadiens where he finished his playing career.

After hockey Chris tried the insurance business, before returning to the game as an assistance coach to Jacques Lemaire with the New Jersey Devils. He then accepted a head-coaching job in the East Coast Hockey league with the expansion Chesapeake Icebreakers. In his first year as Head Coach, Chris won Coach of the Year, in large part because he took a losing team on to finish in first place.

As a result of hockey injuries, Chris has had thirty surgeries. A side-effect is incredible arthritic pain, and he became addicted to pain killers, and then when the pills ran out – heroin. He woke up from a near overdose in a hotel room, alone and scared. “I tried to get up, but my legs buckled and I feel down. I don’t usually pray for myself – I pray for my kids, for the soldiers; for other people, for God to watch over them. But that time I got down on my knees and prayed for help.”

“People don’t see addiction as the disease that it is. My father wouldn’t have been ashamed of me if I’d had cancer.” Chris continues; “I didn’t want it that way – but it happened. I’ve always had faith in God – I’ve always had that. I was a mess, busted, beaten down by my addictions.” After a near fatal car accident while he was sick from withdrawal, he reached out for help. It was while he was in an Oregon rehab facility that he met Jaime; and today they support each other to live clean and sober lives. But it hasn’t been an easy road. 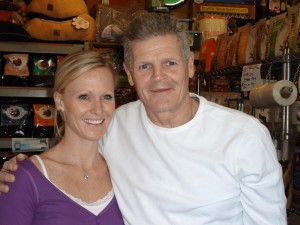 “I came here to Montreal with my clothes. People here have always been supportive, and have had faith in me. A friend helped me and Jaime out by lending us a condo while we got on our feet. I do live broadcasts on TSN 690 with Mitch Melnick 5 nights a week during the hockey season.” Chris also has become a popular motivational speaker; with a straight from the heart and gritty delivery.

Inspired by a teenager who took her own life as a result of constant bullying; Chris has studied the subject and has become an advocate to stop bullying. Chris has become a sought-after speaker in schools with his No More Bullies campaign. “I have age appropriate messages that enable me to speak with kids from grades 1 to 11. I use a kitten and dog analogy for younger children, and a more direct and real approach for the older students.”

I teach them that there are steps that they can take to re-assert themselves in the face of bullying; and also that standing back and not getting involved is wrong. They don’t want to be perceived as a rat. But I tell them that in fact they are helping not only the person who is the victim of bullying, but also the bully.

Bullying is a learned behaviour, and unfortunately usually in the home. A son sees his father bulling his mother, and perhaps unconsciously falls into the same pattern. But – since it is a learned behaviour – it can be un-learned. And that’s what I try to do with the kids when I talk to them in schools. I go through the steps with them, and explain how it works. Not just ‘do this’; but I also explain what happens when they take action.
…Chris Nilan

Teachers, principals, parents and the students react favourably to Chris’ No More Bullies message. “The kids are attentive – I can see that they’re taking it in.” He issues advice and a challenge that empowers his young audiences; “You kids have to stop it, you can put a stop to bullying. Stick up for the smaller kids.” The message is kid-centered; not a top-down adult to youth “you should do this” message. Instead, the message is; “Here’s what you can do to put a stop to it.”

Oscar winning film director Alex Gibney initially set out to make a documentary about hockey enforcers titled The Last Gladiators. However, it evolved to have Chris Nilan as a central figure – not only because his story is so brutally compelling; but also because of his ability to communicate the unvarnished truth. Released in October, Chris travelled extensively in the fall of 2012 to promote the film, and may embark on a tour of major US markets in early 2013. The film has won critical acclaim in Canada, and the producers are optimistic about the reaction it will receive in the US.

If I wasn’t sober, I wouldn’t be able to do all this.
Chris Nilan

Chris has adapted his enforcer’s nickname to establish the Knuckles Nilan brand and motto: Never Back Down – Never Stay Down. Fully 50% of the profits generated from the sale of knucklesnilan.com merchandise are donated to Kids Help Phone.

Chris still deals with pain – but now without drugs. “I need a new knee, and my ankle is still in bad shape from when I had three surgeries in five days. I developed a staph infection, and after the second surgery, the doctors said that I should start considering amputation, that they might have to take my foot off to save my life.” With his characteristic chuckle and that ‘smile thing’ with his eyes; Chris states; “I got lucky with the third operation – and I still have my foot!”

It’s been a long journey in a short period of time for Chris, at times requiring great courage to accept that he hurt himself and his family. That same courage enables Chris to face each day and keep moving forward. “I know who I am – and I’m OK with that.”

For information about Chris Nilan’s appearances, motivational presentations and to ask about his No More Bullies campaign; you can reach Chris and Jaime via his website: www.knucklesnilan.com