For thousands of Montrealers, the spirit of Christmas ‘officially’ begins when the Montreal Jubilation Choir presents their annual pre-Christmas concerts. It’s a family event, hosted by the Jubilation family and their patriarch; choir Founder and Artistic Director – Dr. Trevor Payne. The band takes the stage, the beginning chords of Highway To Heaven begin to fill the hall, the mighty Hammond organ swelling and lifting the music. Before you realize it, Choir members begin entering from the back of the hall – making their way towards the stage and passing within inches of the astonished members of the audience. Hands clapping, eyes sparkling, and robes flowing; the choir dances their way towards the stage. In a tumultuous world; we will enjoy an evening of respite; our spirits lifted and our innocence restored.

This year, the annual concert will also be a celebration of The Jubilation Choir’s 30th Anniversary. That the choir has lasted and thrived for thirty years can be credited to a number of people. Firstly – it’s a testament to the vision and leadership of Trevor Payne. Secondly – the dedication of the choristers and their love of singing Gospel music. Thirdly, there is the important support of people like Jim West at Justin Time Records, Impresario Donald K Donald, and Board members/advisors Rob Braide, John Rae and Jim Hindley.

More than thirty years ago, before the Jubilation Choir sang their first notes, Trevor was involved in starting the Montreal Black Youth Choir. He was studying music at McGill, having decided that his future was not in rock ‘n’ roll. Daisy Peterson Sweeny (Oscar’s sister) was the reigning piano teacher for most of the children in St-Henri’s black community; and she was organizing the annual recital for her students. 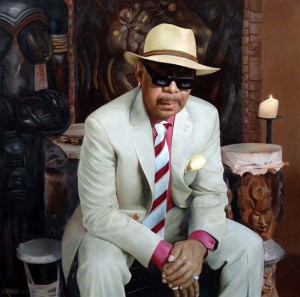 “I was studying music at McGill and Daisy called me saying; ‘Trevor, I’m going to have my yearly piano recital at Union United Church. I’d like you to come and show these kids that there is so much more available to them. You’re studying music at a university level, and I want you to play the violoncello’.” Trevor laughs; “I really didn’t want to play the violoncello; and I suggested that it would be better if I taught her students a song and that I’d conduct their performance.” More laughter from Trevor; “I’d do anything to get out of playing that violoncello!”

So – with Daisy’s agreement – her class would sing a song under Trevor’s guidance. “At the first rehearsal; there must have been 30 or 40 kids – some weren’t even Daisy’s students. The audience at Union United Church went berserk! We did an encore and had to sing the same song again…”

This was good news for the Church, and shortly thereafter the Minister telephoned Trevor; and asked him to organize a permanent youth choir. Much to everyone’s pleasant surprise 60 youth presented themselves at the first audition. “I was overwhelmed – I threw up my arms and said – ‘You’re all in the choir – let’s get started’. This was the beginning of The Montreal Black Community Youth Choir.”

The 75th Anniversary of Union United Church was in 1975, and the congregation had a major celebration planned. For the anniversary, Trevor was asked if he could include the senior members of the choir as an intergenerational choir. It was to be a momentous occasion.

In October, 1982, with Trevor Payne conducting and Oliver Jones playing the organ, the Montreal Black Community Youth Choir and the Union United Church Choir performed together as The Montreal Jubilation Choir.

That performance would mark a major change in many lives: Trevor Payne as Director and Choirmaster; the Choristers; and in the years to come – the many young musicians who would come to accompany the choir. Little did they know that The Montreal Jubilation Choir would go on to perform for hundreds of thousands of people; travel the world; win competitions and provide a lifetime of musical enjoyment and fulfillment for each member. Each one with a story; a passion for singing; and a pride in their dedication – they came together for the joyful purpose of singing as one wonderful and powerful voice.

Some choir members have gone on to enjoy successful music careers, while others have found solace and inspiration within the choir, the weekly rehearsals and the high-energy performances.
Kenrick Julien and Susan Clarke have been with the choir since day-one. Each has special memories and feelings about the choir.

“When you ease back a little and let the singing flow and wash over you – you can feel God’s Spirit.”

Kenrick started singing with the Black Community Youth Choir under Trevor’s direction for five years, and has continued for an additional thirty years with the Jubilation Choir. “I haven’t done anything for this long” he says with a laugh during our conversation just outside the Concordia Music Faculty rehearsal hall. “I haven’t even been married this long!”

Continuing, Kenrick says; “It’s a family kind of thing that we have here. When you ease back a little and let the singing flow and wash over you – you can feel God’s Spirit.”

Susan Clarke, another thirty year member – exudes a quiet assurance that comes in part from her deep faith. “Some friends of my brother suggested that I audition. So I went, and sat on the piano bench beside Trevor in a little church basement and I started to sing. He told me to keep practising. I did and he accepted me into the Choir.” Susan continues; “My favourites are the Gospel songs. When we have different soloists, they can bring a new meaning to the songs – you can hear the words from a fresh perspective. My favourite time is when we’re on the bus on the way to a concert. We’re all in a good mood, carrying on and having a wonderful time – like a very large family.”

Susan has known Trevor Payne for thirty years and says with a gentle smile; “Trevor makes it easy, he’s very perceptive and knows when he has to let up on us just a little. He helps you to reach your potential. With Trevor – we get leadership.”

Jim West, the founder and owner of Montreal’s iconic jazz label, Justin Time Records has produced 12 albums with the choir. “I first met Trevor in 1971, but it wasn’t until 1984 that we recorded The Montreal Jubilation Choir’s first album. It’s amazing to watch him in the studio, coaching the different voice sections. He’s a perfectionist – he wants the performance to be flawless.”

Continuing, Jim ads; “Keep in mind – Trevor’s organizing a choir of 40 – 44 people, plus half a dozen musicians. It takes someone of his character, of his charisma and natural leadership to keep everyone motivated. And – he’s been doing it with great success for 30 years!”

Impresario Donald K Donald remembers booking Trevor’s rhythm ‘n’ blues band at high school dances in Rosemere. “He was one of the first artists I booked when I started out in Rosemere. I think Trevor’s first band was called Trevor Payne and the Hounds.” Today, Donald serves on the Board of Directors for The Jubilation Choir as well as the recently constituted Gilead Jubilation Foundation. “Above all Trevor is a great humanitarian. We’ve had a lot of fun over a span of 50 years, and I have many treasured memories with Trevor as a business associate… and especially as a close friend.”

John Rae, a senior executive at Power Corporation, and his wife Phyllis are enthusiastic fans of gospel music; and attended their first Jubilation Choir performance at St James United Church. “We found the choir and the band to be exceptional, and we began to invite and encourage our friends to attend the choir’s annual Christmas concerts. Following a 1997 summer concert in St-Sauveur that we overheard three French-speaking women say; ‘Quelle belle musique, quelle belle soirée, quelle belle pays…’ It was as if the Jubilation Choir had acted as a force for national unity that evening.”

“Trevor brings a rare combination of discipline and compassion to the choir. He’s a serious man – you have to be when managing a group of more than forty people.” Rae adds; “It’s also important to give credit to the musicians and their contribution to the performances. As good as they are – the choir sounds just that much better with the band.”

Drummer Jerry Mercer (a member of April Wine for 38 years) has known Trevor Payne since the early 60s when they performed in the Blue Sky Revue, a local amateur talent show. “Trevor was playing a Ray Charles song, and I immediately became a fan. We played together for many years before he decided to go to university and continue his musical education.” Jerry continues; “Trevor has the respect of everyone that works with him. He runs the ship pretty hard, but everyone knows that it’s for the good of the choir.”

I attended a Jubilation rehearsal in preparing this article. Trevor was working on a complicated chant with sections of the choir. Over and over, he’d work first with the Tenors, then the Bass section, and back again; offering words of encouragement – ‘You’re gonna get this – I know you can do it – We’re almost there…” Then finally; “okay, let’s put it all together.” The power of 40 voices fills the choir’s rehearsal room at Concordia University. Smiling faces, heads nodding and a few high fives – they’d done it.

The Montreal Jubilation Choir is an extended family; and like family – they look after each other. “When I was recovering from my treatment for prostate cancer,” Trevor confides; “many of the choir members called me during that difficult time. They didn’t ask about choir issues, they wanted to offer their support. They wanted me to know that I was in their prayers and that they cared about me. Those calls were like a tonic for my soul.”

The Montreal Jubilation Gospel Choir will celebrate its 30th Anniversary on December 2 at Place des Arts’ Theatre Maisonneuve. It promises to be an outstanding concert, with guitarist Kat Dyson returning to the choir that helped launch her musical career. Jerry Mercer will play timbales along with the Jubilation band. Jim West, Donald K Donald, John Rae, Jim Hindley, Rob Braide and more than a thousand Montrealers will listen to Kenrick Julien, Susan Clarke and the rest of the Jubilation family raise their voices in celebration; to commemorate their wonderful musical journey – and to thank their leader and friend for his dedication and inspiration – Dr. Trevor Payne, Order of Canada.

The Gilead Jubilation Foundation is a registered charitable organization whose mandate is to assist the Jubilation Choir in their community outreach activities. With the support of the foundation, the choir will be able to assist other organizations with fundraising performances. Individuals and organizations who make donations receive tax receipts for their contributions.

Foundation President Jim Hindley notes; “The choir recently performed at Lakeside Academy, and the whole school got involved – not just their choir and music students. We taught them how to organize a program and generate additional funds; the students organized a bake sale, and they set up a committee of greeters for the concert. It was terrific to see the students taking on new responsibilities and working together to make the concert a success.”