The more a country’s way of life is different from ours, the more I find it interesting. If everything`s the same as in Montreal, why bother going there? When I travel I seek differences in culture, cuisine, ideas about human relationships such as raising children, respect and care for the aged, the extended family, as well as a variety of social and political viewpoints.

I try to see the world through their eyes. I don’t always succeed, but when I do; I get very new, different and fascinating perspectives. Of the 130 countries I’ve visited India is the most different. There’s always something unusual, unexpected, surprising (that’s why I’ve been there 35 times!) Here’s an example:

A few years ago I was lucky to be a house guest in the very friendly home of a middle class wool merchant family in Nagpur. “Middle class” meant, at that time, no motor vehicle but several scooters, electricity, running water and all the grandchildren enrolled in private schools. 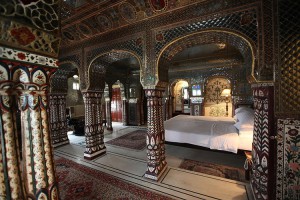 Every evening before dinner the family elder, a white- bearded patriarch in his early sixties, would recite a lengthy prayer. He had four sons, one of whom spoke fluent English. I asked him to translate the prayer. He said “my father thanks the goddess Kali that this year there is no drought, so food is plentiful, the price of wool has risen and he is prosperous. He also thanks KALI for giving him four hard working, respectful sons.” Then he always concludes by saying “I especially thank KALI for having given me the most wonderful, loving, affectionate wife, whom I love and respect and who makes me so happy”. The son confirmed that the marriage had been arranged by the parents.

In India 99% of marriages are arranged by the parents. Often the bride and groom see each other for the first time at the marriage ceremony! Our preconceived prejudice would lead us to think that happiness could not result from that lack of choice. Of course the parents love their children and try to select a spouse with whom they’ll get along. 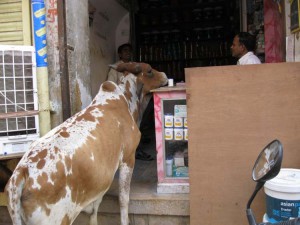 I believe that a hotel shouldn’t be just a place to sleep, wash and store luggage while visiting museums. A hotel should be a part of the travel experience. Therefore the more different it is the better I like it. All the big chains have hotels in India. They’re designed and operated in identical fashion to the ones in Toronto, Frankfurt, Chicago, Melbourne, etc. Many people like that. I prefer to live in real palaces.

Before independence in 1947 India consisted of many semi-independent states, ruled by Hindu Maharajahs or Muslim Nawabs; some of them fabulously wealthy, owning thousands of hectares of agricultural land and entire villages. Using their wealth they built stunning palaces, surrounded by sumptuous gardens. 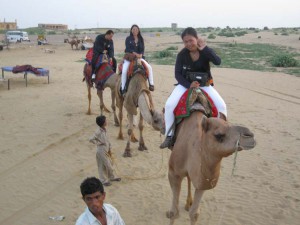 In the 1960s the Indian government confiscated the land (and the villages thereon) and freed the peasants from paying their rent to their former overlords. Suddenly the Maharajahs had no income! But the palace’s roof still had to be repaired and the gardeners’ salaries had to be paid. Many of these royal families seized the only alternative: transform the palace into a hotel!
In Jaipur we stayed at Samode Haveli, the palace of the Maharajah of Samode. Our suite’s wall and ceiling had (literally!) thousands of coloured mirrors incrusted in them. Imagine the reflections!
Thirty kilometers from there, the same Maharajah transformed their ancestral castle, situated high on a mountain, into the Samode Palace hotel. Our suite’s private terrace had a 20 km view. That private terrace also had a fountain which spouted streams of clear water high in the air – as well as a big Jacuzzi for pleasant relaxation.

The Lake Palace Hotel in Udaipur, built by one of India’s richest Maharajahs, is made entirely of white marble. It’s in the middle of a lake and reached only by boat .The swimming pool, also in white marble, is completely surrounded and perfumed by walls of red flowers.

Being an ex – British colony, you drive on the left side of the road in India. I’m too lazy to drive. I’m also scared. Since I’ve always driven on the right side I’m afraid that in a sudden, unexpected situation my automatic, knee –jerk reaction could be faulty and thereby very dangerous. So I hire a vehicle and a driver. That’s always very efficiently handled by my friend C.K. Bhatia and his assistants Sunil and Ajay at ACME TOURS and TRAVEL India.

There are more Muslims in India than there are Muslims in Pakistan! With very, very, very, rare exceptions there is little tension or discrimination .There are also Christians (mainly in Kerala) and Buddhists. We went to Bodhgaya, (where Lord Buddha achieved enlightenment) and again saw no trace of religious discrimination. India is a very tolerant country.

Vegetarians will be delighted .The “Thali” system is a fixed price meal. On a large stainless steel platter (or a big banana leaf) you receive several vegetarian curries, yoghurt, lentil soup, rice, chapatti flat bread, spiced pickles and a sweet often made from rice, milk, honey and pistachios. Serving personnel refill each item on your platter as soon as it’s been eaten – until, fully stuffed, you say “that’s enough thank you”. For carnivores like me, Tandoori restaurants marinate chicken, fish or lamb in spiced, mint flavoured yogurt, (overnight in the fridge) and bake it in a conical oven. Delicious!

Except in westernized restaurants, in India food is eaten usually using the right hand .My first reaction, (a worry about cleanliness) disappeared when an Indian friend said: “In Canadian restaurants you use cutlery. I know how thoroughly I washed my hands. Do you know how well the Canadian dishwasher cleaned the cutlery?” Paul Unterberg is a Montreal lawyer who speaks English, French, German, Spanish and Thai. He spent 4 years in India; as well as lengthy periods in Afghanistan in the 1960s, Iran, Thailand, Maldives, Polynesia, Morocco, Egypt, and many more fascinating countries.

Cheaper fares are usually available using Egyptair (a quality airline and a very friendly member of Star Alliance) from New York via Cairo to Mumbai. (www.egyptair.com.eg). This also gives you a chance for a stop in Cairo, to admire the pyramids and shop in the bazaars.

Although some Montreal tour operators sell package tours to India, I prefer to make my own arrangements. I book the hotels directly (Google: Samode Palace, Samode Haveli, Roopangarh or use the list of palaces prepared by the Heritage Hotels Association of India.