The Rocky Mountain Express, directed by award-winning Canadian filmmaker, Stephen Low, who has spent thirty years directing IMAX films. Picked as Best Film of 2012 by the Giant Screen Cinema Association (which also awarded it Best Cinematography), Rocky Mountain Express propels audiences on a remarkable steam train journey through the breathtaking vistas of the Canadian Rockies. You will Discover the incredible challenges encountered in the 19th century by those who built this first Canadian transcontinental railroad, testimony of a young, fragmented Dominion united from one coast to another by a strip of steel.

To the Artic 3D, the first film from the One World One Ocean campaign and an extraordinary journey into northern lands which pulls audiences into a tale of captivating survival and brings to light environmental challenges with planetary consequences. Also equally awarded the Best Film of 2012 title by the Giant Screen Cinema Association. To the Artic 3D takes you on a journey into the lives of a mother polar bear and her twin six-month old cubs as they navigate the changing Arctic wilderness they call home. This fascinating film brings you up close and personal with this family’s struggle to survive in a frigid environment of melting ice,immense glaciers, spectacular waterfalls, and majestic snow-bound peaks. 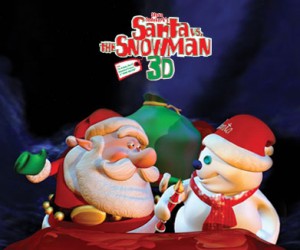 Santa vs. The Snowman 3D to take advantage of the holiday season. Lost in the far north, a snowman discovers Santa’s village. Jealous of the friendship and enjoyment of life that he finds there, the snowman tries to steal the spirit of Christmas. After several wacky incidents, the story ends with friendship and joy, much to everyone’s delight. The fanciful animation was done by the same folks who did Jimmy Neutron.

For tickets and information visit centredessciencesdemontreal.com