The first of a two-part feature on Toronto the Fun

Toronto is often thought of as a 9 to 5 city, a bastion of business that slumbers outside office hours – but nothing could be further from the truth. Restaurants, museums, markets and live theatre thrive in this lakeside metropolis.

Flying into the Billy Bishop Toronto City Airport is an exercise in stress-free travel. Porter’s extra inches of legroom and complimentary drink and snack make the flight exceedingly pleasant. However, the real joy is landing in the heart of Toronto. Trekking from Pearson Airport into the city can add 50 minutes of sitting in nerve-raking traffic to your travel time. The Billy Bishop Airport, on the other hand, is on an island just a 121 m (400 ft) from the shoreline of downtown Toronto. Therefore, after alighting from the plane I simply roll my luggage on to the ferry and after just a few minutes of gazing at the city’s skyline, disembark on the other side. From here a choice of taxi or a free shuttle bus to Union Station and in little more than five minutes I arrive comfortably at my weekend lodgings. 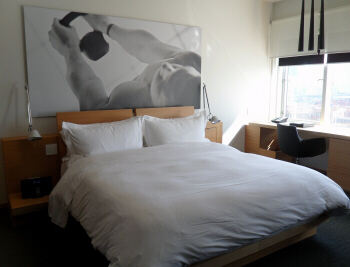 The 167-room boutique Hôtel Le Germain Maple Leaf Square, offering a long list of amenities and noteworthy personal service, is located in the hub of the city, next to the Air Canada Center and just a couple of blocks from the CN Tower.

The lobby and adjacent lounge are sleek and refined with dark walls, minimal furnishings and colour changing light strips embedded into the floor. The attention to detail continues in the guestrooms with a large, artful and unique, black and white photograph of an athlete’s muscle-flexing physique hanging above each crisp white goose-down duvet-covered luxurious king size bed. The contemporary designed bathrooms feature glass-enclosed showers that look out onto the bedroom (those wishing for more privacy can close the blinds along the two outer glass walls) and prestigious British Molten Brown body wash and hair care products. The rejuvenating and soothing, 18-inch square, rainfall spa showerhead is heavenly. It is a euphoric experience, blending the relaxation of a massage with the energizing vitality of a warm summer rain.

Princess of the Silver Screen

Indulging in our fascination with the actress turned princess, the Grace Kelly: From Movie Star to Princess exhibit, on its only North American stop, runs until January 22nd at the TIFF Bell Lightbox (official home of the Toronto International Film Festival). Decades after her untimely and tragic death, Grace Kelly still captures the imagination of adoring audiences. The display contains personal letters, home movies, Hollywood memorabilia, jewels and selections from her stylish wardrobe.

For such an iconic movie star, I find it stunning to learn that Grace Kelly only made 11 films. Her meteoric rise, culminating with starring roles in Rear Window, To Catch a Thief and High Society, is all the more impressive considering that there is only a five year span from her first film to her last.

Exploring the display cases filled with telegrams and letters from the likes of Bing Crosby and Alfred Hitchcock – charmingly signed Hitch – I come across one that I particularly like. The letter dated November 7th, 1963, was sent to Princess Grace of Monaco after Hitchcock had unsuccessfully tried to lure her from retirement and star in his upcoming movie. “I start the MARNIE picture in about ten days and I do so with a tiny wince of nostalgia for what might have been. I have as a leading man a chap named Sean Connery who has recently come to public attention through his portrayal of the Ian Fleming character James Bond.” It is amazing that the chap who had only recently come to the public’s attention is now a knighted movie star with well over fifty films to his credit.

A large part of the exhibit focuses on the classic and elegant fashions that became synonymous with Grace Kelly. Set aside from the main gallery, beyond a set of glass doors, is a meticulously created copy of her legendary, MGM designed, wedding gown. Original dresses and gowns, including her gorgeous Oscar-night ball gown (complete with her Best Actress Oscar for The Country Girl) are displayed throughout the stark white gallery. Standing in front of a very unstylish black dress with large flowers, I learn the truth about Grace Kelly’s allure.

The information plaque on the glass case explains that while in France for the 1955 Cannes Film Festival, a photo shoot with Grace and Prince Rainier III of Monaco was arranged. Due to an electrical problem, Grace was unable to iron any of her clothes and the only item that was not excessively wrinkled was this homely black dress. Thinking about how embarrassing it must have been for her, I look over and see a picture of her taken that day. She’s beautiful. Somehow, she manages to – even in that dress – look glamorous and radiant. A feat that, I am sure, could not be duplicated by any of today’s starlets. 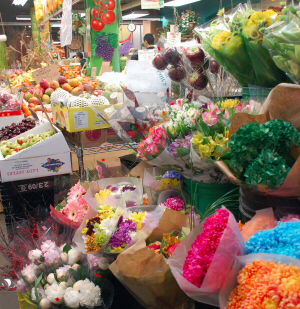 Meet Me at the Market

The St. Lawrence Market is a mainstay of the city and recognized as one of the world’s top 25 food markets by Food & Wine Magazine. The Carousel Bakery, famous in its own right, is known for its award-winning Peameal Bacon Sandwiches and outstanding selection of international breads. Over-looking the hustle and bustle of food stands, the Market Kitchen hosts cooking classes using fresh on-site ingredients. On this same elevated section, in the original council chamber of the Toronto City Hall, the Market Gallery still houses the Mayor’s chair, and until February 22nd an exhibition highlighting historic city photographs, drawings and maps.

The Distillery District, just east of the downtown core, is a 14-acre historic site. Starting in 1873, the Gooderham and Worts distillery operated for a 153-spirited years and at one point in the 1880’s was actually the largest distillery in the world. 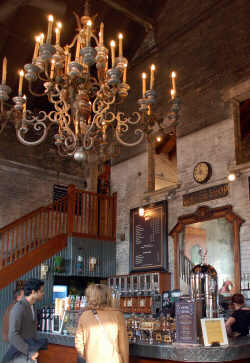 The site, the largest and best-preserved collection of Victorian industrial architecture in North America, then became a popular filming location and in 2003 was transformed into a pedestrian village for art and culture.

Caught up in the history of the site, my tour guide for the hour, visionary developer, Mathew Rosenblatt promises to open my eyes to the new and thriving cultural community that he has helped to foster here. Our first stop is the old pump house, where Balzac’s Coffee serves fresh roasted brews in a European café setting. For added ambience, a large and grandiose chandelier hangs from the two-storey ceiling. Then it is on to the Mill Street Brewery for a tasting. I have never been a fan of beer but embracing a “when in Rome” spirit, I sample the very light flavoured Original Organic Lager and although I have not been transformed into a beer lover – à la Norm from Cheers, I quite enjoyed it. For those who do share an affinity with Norm, an impressive array of ales, enough to find something to suit anybody’s taste, is available on tap.

The tour continues with stops at some of the Distillery District’s 22 galleries: local and international artists featured through ever-changing showcases of sculpture, photography, painting and design. Trendy restaurants that have foodie’s salivating and acclaimed performing arts companies are found along Brewery and Tank House Lanes. 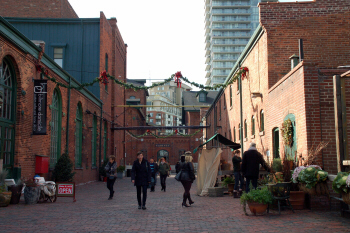 Strolling along Tank House Lane, in the
heart of the Distillery District.
Credit: Julie Kalan

While noticing a group of people riding Segway’s in front of the Young Centre for the Performing Arts, Mathew asks if I have ever had hot chocolate. “Of course,” I answer and think to myself what a strange question. Then he opens the door to the Soma chocolate boutique and with a smile says, “Not like this.” In this chocolate bar, micro-factory and boutique the creation of chocolate delicacies is an art form. My hot chocolate – their signature Spicy Mayan hot chocolate, comes in a small ceramic shot glass. With one sip, I realize exactly what Mathew meant. The creamy concoction begins with the flavour of rich, sweet chocolate and then packs a punch with its hot and spicy endnotes. The black board above the counter describes the list of ingredients as dark Peruvian chocolate, ginger, Madagascar vanilla, orange peel, chilli peppers and a secret blend of Soma spices.

As he predicted, Mathew has opened my eyes to the living and dynamic side of the Distillery District. Reusing the architecture and materials of the past to house the creative vibrant culture of today has created, as the Toronto Star declared “Toronto’s new cultural hotspot.” My last stop is the Cube Works Studio, where works of art are made using thousands of differently configured Rubik’s cubes – just another new twist in art. 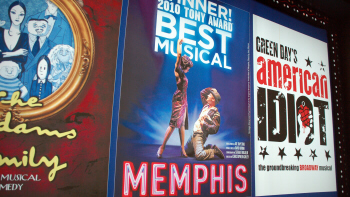 Toronto is a city that relishes live theatre. Its ever-growing passion with the stage has broadened the list of venues and productions, leaving audiences with a wealth of plays and musicals from which to choose. Tonight, I am waiting for the curtain to rise on the musical comedy The Addams Family – definitely creepy and kooky, but all together a fabulous production. This snappy, funny and at times touching musical is just one of the many shows presented by Dancap Productions, a company that, in just five years, has made its mark on the Toronto theatre scene. Their main venue is the Toronto Center for the Arts, a grand and acoustically sophisticated theatre that is located outside the downtown core and north of highway 401. Whether traveling by taxi, car or subway allow yourself plenty of extra time to get there. However, you can rest assured that all your extra effort will be repaid in full, with top-notch shows. Upcoming shows include the Canadian premiere of An American Idiot (December 28, 2011 – January 15, 2012), the Tony award winning In The Heights (February 7 – 19) and the family favourite Shrek The Musical (March 19 – 31).

Sandwiched between the St. Germain Hotel and the Maple Leaf Center is the Real Sports Bar. I am not a huge sports fan and would normally not visit a sports bar while traveling, but this place could probably make one of those “uber” lists. The place is massive, with two levels and seating for over 900, but the clever division of space gives each section its own personality. Seated in a section near the windows, my two-person booth is not only intimate but comes with its own HD TV – all the booths do. A grand total of 199 screens plaster the walls (even in the washrooms); plus the bar’s claim to fame – at two storeys high, the largest sports bar HD screen in North America. The tables in front of this gargantuan TV are fully packed even though it is only mid afternoon. While absent-mindedly watching a football game on my private TV and enjoying my soup, the action on the screen – a loose ball with a mountain of players piling on top of it and a referee’s panicked face, as he flags the play – suddenly grabs my full attention. The slow-motion instant replay shows another referee being knocked down and consequently ending up under the heap of burley players. The scene (that turned out not to be serious) evokes a gasp from my lips that is simultaneously joined by a massive gasp from the two hundred plus people in the bar. It is an interesting dynamic – the setting allows patrons to share the excitement of a game and yet still maintain an almost private atmosphere.