Paris is a city of love and romance, the capital of haute couture and a bastion of gastronomic delights. Magnificent sights, countless museums, grand boulevards, immaculate gardens, intriguing cafés and some of the best window-shopping in the world, there is something wonderful to discover around every corner! I could easily spend a week or two exploring all this captivating city has to offer. However, with only time for a brief courtship, I must select just a few of the best attractions to visit. And promise myself to return to Paris’ embrace once more.

The Grand Lady of Paris 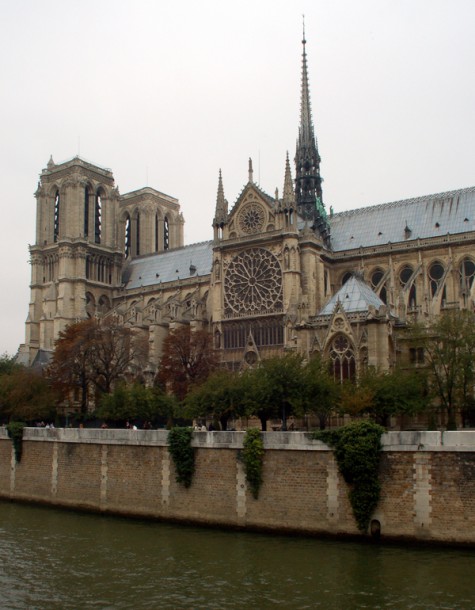 In the heart of Paris resides the great gothic cathedral of Notre Dame.

The interior is graced with beautiful stained glass and impressive medieval architecture. Most interesting to me, is the chance to explore the cathedral’s lofty towers.

The entrance to the tower tour is outside the cathedral at the base of the north tower.

About half way up the 387 spiralling steps is a lovely vaulted ceiling gift shop. I am tempted to pick up a few souvenirs but luckily, I realize the folly of having to carry them up almost 200 more steps. To my surprise the climb up is not all that taxing. The view, out on the gallery spanning the two towers, is exhilarating and unforgettable. Down to my left, the Seine flows alongside the Ile de la Cité. On either side of me, menacing stone faces stare out across a sea of endless rooftops. Only a few structures boastfully rise above the rest: on the Left Bank, the golden dome of Les Invalides, the iconic Eiffel Tower and the out of place skyscraper Montparnasse Tower; on the Right Bank, further in the distance, crowning the heights of Montmartre is the Sacré-Coeur Basilica.

Turning my attention back to the cathedral gallery, I enter through a small wooden door on the south tower. Here, in the belfry, the fictional haunt of Victor Hugo’s Hunchback of Notre Dame, a 13-ton bell hangs from massive oak beams.

Stepping back onto the gallery, I peer over the edge and watch tiny tourists milling about the square below, known as the Place du Parvis. Most visitors stop and spend a moment by the bronze statue of Charlemagne. The green monument depicts the emperor on horseback, with a beard, handlebar moustache and crown.

When I passed by earlier, I thought that he would have appeared quite intimidating had it not been for the pigeon cooing on his shoulder! From the center of the Place de Parvis, tourists can take in the beauty of Notre Dame’s western front. The limestone has a wonderful chameleon-like effect. When the sky is cloudy, as it is today, the stone projects a stern, gray solemness. Under a bright mid-day sun, the stone appears as a pristine cream colour. Then, as the sun heads closer to the horizon the facade glows with a honey hued warmth.

Everyday an average of 13,000 people visit the cathedral, but I wonder how many people standing in the Place du Parvis know of the history just below their feet. For at the far side of the square, down a flight of stairs, the remnants of Paris’ last 2000 years lie in the Crypte Archeologique. 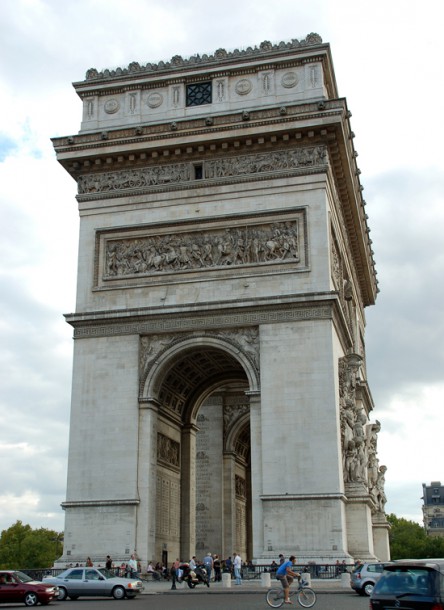 Side view of the Arc de Triomphe
Photo: Julie Kalan

My first few minutes on the rooftop of the Arc de Triomphe are anything but triumphant.

Climbing up the 284 gruelling steps of the stuffy stairwell leaves me panting and trying to catch my breath. Nevertheless, the view quickly makes up for the effort. It is quite thrilling to look down the perfectly aligned Champs-Elysées, past Place de la Concorde and les Tuileries towards the Louvre. Like the rays of the sun, twelve city streets radiate out from the monument Napoleon had built to honour and celebrate France’s military victories. Since the end of World War I, the tomb of the Unknown Soldier has rested beneath its massive arches. Monumental in size, at 162 feet (49.5 m) tall, everything about the Arc de Triomphe, from the crazy roundabout that surrounds it to the dramatic high relief sculptures on the piers, is far larger than I had expected.

The Champs-Elysées is famous for its cafés and high-end boutiques, but these days Cartier, Louis Vuitton, and Montblanc mingle with the Gap, the Disney Store and of course, McDonald’s – all be it, in a Parisian McCafé incarnation, complete with speciality coffees, pastries and sidewalk dining. The car showrooms are particularly impressive too. Three-story, glass front buildings, feature the likes of cars spinning and stacked to resemble DNA models. Evening turns to night as I stroll along the Champs-Elysées and arrive at Place de la Concorde. It was here that the French Revolution’s guillotine made over 2000 people “a foot shorter on the top.” Now, the area is home to a 3300-year-old Egyptian obelisk, grand water fountains and a brightly illuminated Ferris wheel. Times have certainly changed.

Once a royal palace, the Louvre has been a museum since 1793. With thousands of sculptures and paintings, multiple levels and wings, a visit to the Louvre can be a bewildering prospect. Trying to see it all in one visit is simply impossible. I join a whirlwind hour and a half guided tour of Louvre’s greatest masterpieces. First stop is the armless Greek statue Venus de Milo. After a few minutes of gazing at this marble goddess, we move on to the Romanticism section and Delacroix’s Liberty Leading the People. In this large painting, Liberty is in the form of a semi-clad woman, carrying a gun in one hand and the French tri-colour flag in the other. The scene shows Liberty leading a motley group of Parisians out of the smoke and over the dead and dying during the Paris uprising of July 1830.

The sentiment is powerful. Our next stop brings us to what is probably the most visited room in the entire museum. The Wedding Feast at Cana is a stunningly huge painting, approximately 22 feet (6.77 m) high and 32.5 feet (9.94 m) wide. The oil painting depicts Christ’s first miracle, turning water into wine, as if it had happened in Venice during the 16th century. The joyfully coloured scene is packed with 130 musicians and wedding guests. From across the room, gazing at Veronese’s Wedding Feast, is the Louvre’s most famous treasure – the Mona Lisa. Almost all of the museum’s over 8 million yearly visitors make a point of seeing this Da Vinci portrait. Now, squeezing through the crowd, my first real-life glimpse of this masterpiece leaves me completely shocked. Enormous paintings hang in the surrounding halls, but the Mona Lisa is only about two and a half feet tall (77 cm).

This beautiful and dramatic painting, that has garnered worldwide fame and adoration, is of far more modest proportions than I had ever imagined. 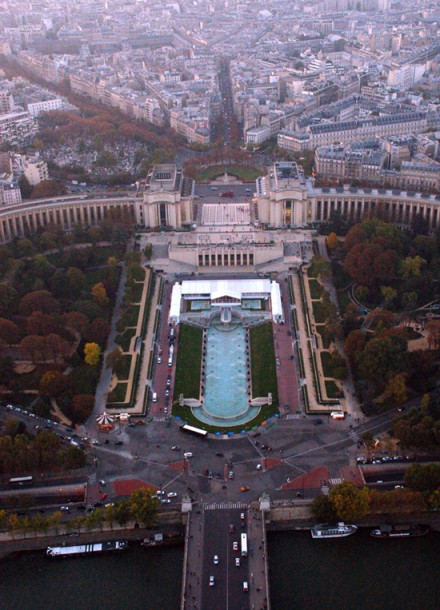 A view of the Trocadero from atop of the Eiffel Tower Photo: Julie Kalan

Synonymous with Paris, the Eiffel Tower was not always the much-loved emblem it is today. Built for the 1889 Universal Exhibition, many Parisians originally lamented the iron eyesore as a detriment to the city’s skyline. The French novelist Guy de Maupassant would regularly dine at the Eiffel Tower restaurant, saying it was one of the few places where he could not see the tower.

Over time the tower’s elegant iron lacework, grand arches and graceful slope won over its adversaries.

The line for the elevator, like a mini UN, includes representations from around the world. Going directly to the top of the tower, I begin to get that “I can’t believe I’m actually here” feeling. A lifetime of seeing the Eiffel Tower in the fictional realm of movies seems to have left me imbued with the sense that the tower itself is surreal. Even the view seems to be too good to be real – maybe it was tweaked in post-production. Out by the railing on the third level, with a furious gust of cold wind, reality takes over. I am indeed standing atop the one and only Eiffel Tower. Oh, and that perfect view? Yes, that’s real, too! 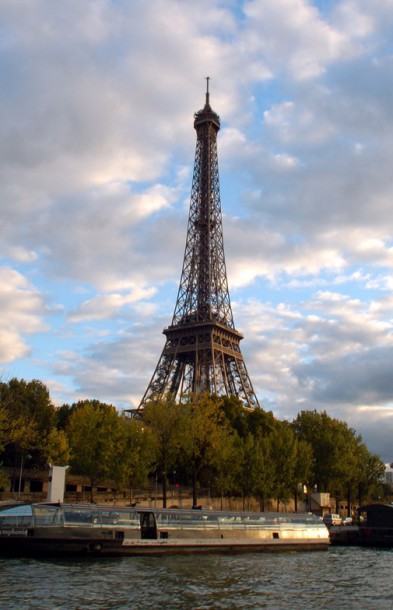 The Eiffel Tower seen from aboard a Bateaux Parisiens cruise. Photo: Julie Kalan

Cruising along the Seine during the day offers beautiful views of Paris, its bridges and especially Notre Dame Cathedral. A night cruise envelops you in the romance of this city of lights. To sample both flavours, I time my cruise to begin about a half hour before sunset and end after nightfall. At the foot of the Eiffel Tower, I board a Bateaux Parisiens and commence my cruise up the Seine. Too excited to remain in my seat, I get up, leave my audio guide and head to the back of the boat for an unobstructed view. Seen from this great vantage point, Paris sparkles with enchantment.

Paris has most definitely won my heart. This city of lights is the place for igniting a passion for art, discovering a new joie de vivre and simply sitting at an outdoor café and enjoying a pains au chocolat while watching the world go by.

The best way to explore Paris is by foot, but for longer distances, the metro is definitely your best choice. With almost 400 stations and 14 main lines, the Paris metro system is more complicated to navigate than our own, but can be easily mastered with a metro map. Moreover, the abundance of stations means you will never find yourself too far from the next one.

If you plan to visit numerous museums and monuments, the Paris Pass might be a good money saving option. www.parispass.com