I admit it. I love London. Some people may see it as just another cosmopolitan, traffic-filled capital that somehow never garnered the public admiration of Paris or Rome.

But London is a destination that offers tranquil green parks, opulent grand palaces, massive cathedrals with stunning architecture, world-renown museums (many with free admission), amazing shopping, and arguably some of the best live theatre in the world. Quite simply, London has it all.

Getting to Know You

If it is your first time in London or it has been years since you last rode the tube (London’s metro), the best way to get the lay of the land is with an open top bus tour.

Both the Original Tour and Big Bus Tours offer extensive routes around the city with live or recorded commentary. A ticket on either of these bus tours is valid for 24 hours and includes, both, a theme walking tour and Thames River cruise. The views from aboard a riverboat bring a unique perspective to all the iconic sites lining the water’s edge. 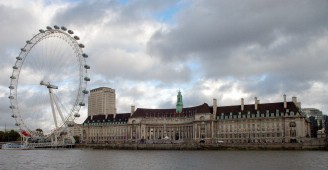 The London Eye is a wonderful way to look over downtown London
Photo: Julie Kalan

One of my favourite ways to see London is from the top of the London Eye observation wheel. At a height of 135m (443ft), you can easily spot Buckingham Palace, St. Paul’s Cathedral, St. James Park and more than 50 other London landmarks. With each rotation taking about 30 minutes, there is ample time to study the vista in all directions. 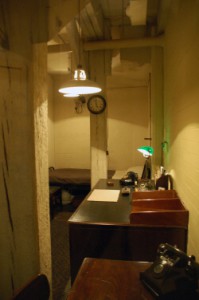 Coming down to earth and a few meters further below, are the Cabinet War Rooms.

From August 1939 to August 1945, these rooms were the secret underground headquarters of the government and military command. Located between the Parliament building and the Prime Minister’s residence at 10 Downing Street, these underground rooms were staffed 24 hours a day.

The Map Room, left exactly as it was on August 16th, 1945, is particularly moving. At the audio exhibits in the adjacent museum, you can listen to some of the courageous men and women voice their own stories of working at the War Rooms. 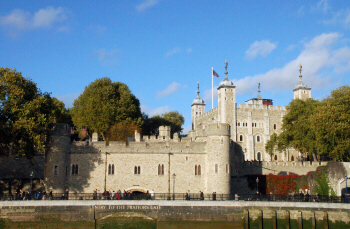 The Tower of London – notice the
identification of Traitor’s Gate on the river wall Photo: Julie Kalan

The Tower of London has served as a fortress, medieval palace, prison, execution site, armoury, treasury, menagerie and royal mint. Today, it is one of the city’s most popular attractions. 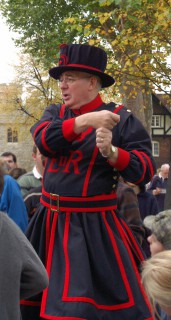 Like a medieval oasis amid a modern metropolis, the Tower makes a formidable impression. The oldest part of the Tower complex, the White Tower, houses an exhibit spanning 500 years of royal armour. The pieces belonging to Henry VIII illustrate the king’s growing need for new armour and attest to an eventual 52-inch waist, on his 6 ft 1inch frame.

Another oversized collection are the diamonds, pearls, sapphires, emeralds and rubies that make up the 23, 578 dazzling gems of the Crown Jewels. Shakespeare coined the phrase, “Uneasy lies the head that wears the crown,” and although I cannot personally attest to it, the enormous gems adorning the crowns must be very weighty, indeed.

A trip to the Tower of London should always include a 60 minute, free Yeoman Warder Tour. The Yeoman Warders possess a special skill – they are uniquely able to explain the facts of a gruesome execution, while simultaneously keeping their audiences laughing.

There’s an app for that

For over 900 years, the Tower of London has continually changed and expanded to suit the needs of the day. The new Escape from the Tower app continues the tradition of evolution. Today’s visitors can help virtual prisoners escape from the real locations where they were held.

Love is in the Air 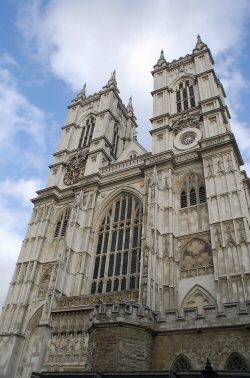 The Royal connection to
Westminster Abbey goes back to 1066 Photo: Julie Kalan

On Friday, April 29th, the eyes of the world will be watching the royal wedding of Prince William and Kate Middleton. While speculation persists concerning the big question, “Will Kate choose a traditional or contemporary dress?” the location is firmly set in tradition. Westminster Abbey has previously hosted fifteen royal weddings, dating back to November11th 1100, when King Henry I wed Princess Matilda of Scotland. However, the royal connection with Westminster Abbey goes back to William the Conqueror’s coronation, in 1066.

While entering Westminster Abbey, I am struck by how cluttered it is.

Not a messy, “quick, shove everything into the back room, the in-laws are coming over,” type of cluttered, but crowded and visually overwhelming, with hundreds of monuments squeezed side by side. The Abbey is massive, but practically every square inch is covered with over 600 monuments and memorials to kings, queens and military heroes.

At times, I almost feel as if I am being disrespectful when I glance down and realize that I have been standing on someone’s grave. However, with more than 3000 people buried in the church and cloisters, it is impossible to avoid treading on the departed. In the Poet’s Corner, lie Chaucer, Tennyson, Robert Browning, Charles Dickens and Rudyard Kipling. 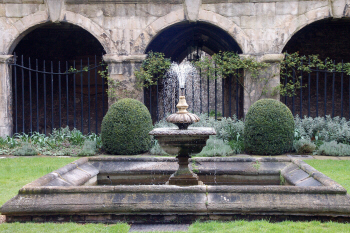 The Little Cloister is my favourite spot for reflection. This little green square is remarkably quiet. The noises from the busy streets surrounding the Abbey are blissfully muffled, leaving only the peaceful sound of the fountain. The effect is both calming and invigorating.

For more information on London attractions and accommodations, visit www.visitlondon.com